My colleagues and I have friends and family who have tested positive for SARS‐​CoV‐​2. Among the most vulnerable to the virus are my wife, who takes immunosuppressants to treat her multiple sclerosis, and many friends she and I made during my years as chair of the New York City chapter of the MS Society. The risk of infection means Cynthia and I can no longer have an aide help with her activities of daily living. I am caring for her myself, while running a think tank from home.

As vulnerable as this pandemic makes us feel, it has not made us value liberty any less than we did before.

As vulnerable as this pandemic makes us feel, it has not made us value liberty any less than we did before.

To cite one salient example: had Americans been free to choose who certifies the diagnostic tests we use, then U.S. labs, health systems, consumers, and arbitrageurs could have spent the first two months of this pandemic purchasing any of the many reliable SARS‐​CoV‐​2 tests that have been available in other countries since January. Testing would have been widespread. Epidemiologists would have a better handle on the virus’s prevalence and progression. Containment measures could have been narrower in scope. Health professionals would be better able to target care to those who need it.

Instead, the Food and Drug Administration created a shortage of tests by blocking Americans from purchasing those or any other tests for two months. Losing that freedom made us more vulnerable by allowing this disease to spread unchecked across the country.

The COVID-19 pandemic has spurred Americans to demand government lift regulations that we at the Cato Institute have fought for decades, because they prevent medical care from getting to the people who need it. All across the country, governors are suspending unnecessary restrictions on health professionals and hospital capacity.

Policymakers should discard such regulations once and for all. Congress should affirm the right to purchase diagnostic tests that are available in other countries and use its constitutional power to eliminate restrictions on interstate telemedicine. State officials should eliminate clinician‐​licensing rules, which restrict access to care while doing little if anything to protect patients. Many states have inane “certificate of need” laws that make it all but impossible to add new hospital beds. States should immediately repeal those laws.

Having allowed this pandemic to get out of hand, government now faces difficult questions of whether and how to restrict freedom of movement and enterprise to contain the virus’s spread. Libertarians recognize such measures can be legitimate, but ask policymakers to consider them with calm and humility. Calm, because panic is its own contagion—one that impairs judgment. Humility, because even when government officials do not act out of panic, their best laid plans often go awry.

Policymakers must begin by recognizing government is not our only line of defense. Many private‐​sector employers (including the Cato Institute) ordered employees to work from home long before policymakers acted. Sports leagues prudently shut down their games (and their massive earnings) to help keep their fans, players, and the general public safe. Government‐​imposed controls merely add to the impact of steps that individuals and private businesses quickly took to protect themselves and the public.

Government officials should not assume they can in every case assess the benefits and costs of shutdowns or lockdowns better than private citizens, nor that federal officials can do so better than state or local officials. On the contrary, policy elites with significant savings, who can do their jobs from home without fear of lost income, may suffer from blind spots that accompany such privilege.

To ensure containment measures are proportionate and do minimal damage to the American people, policymakers must base them on solid epidemiological information (which requires ending the ban on foreign‐​certified diagnostic tests) and commit to lifting those measures upon reaching pre‐​specified targets.

Any financial assistance to those who lose jobs or income should work within existing aid programs rather than create new ones, and should target assistance to the most vulnerable—directly assisting displaced workers, for example, rather than bailing out shareholders. Economic stimulus should come in the form of removing regulatory barriers to economic activity rather than deficit‐​financed bailouts. Federal spending to stimulate demand will have little benefit in the face of wholesale shutdowns and supply shocks.

Under no circumstances should policymakers use this challenge as an excuse to set aside the Constitution, to weaken the rule of law, or to suspend Americans’ civil liberties. Reports that the Justice Department is seeking the power to indefinitely detain people without trial during the pandemic should outrage everyone, libertarian or otherwise.

Libertarians face this challenge with both trepidation and a firm belief in the creative capacities of human beings—in particular the health professionals who are working tirelessly through this crisis. Our hearts go out to the patients and their families around the globe who are suffering pain and loss due to this disease. We urge policymakers here and abroad to avoid panic and hubris, and to address this crisis in a manner that both saves human lives and preserves human dignity. 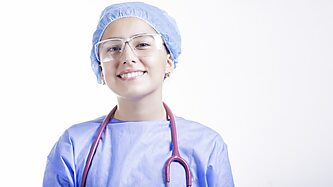 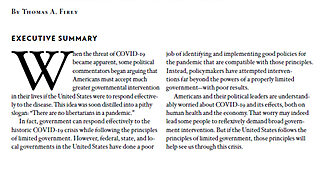 The Government Has a Lot More Emergency Powers Than Libertarians Like, but It Still Can’t Control Everything

Liberty and the Coronavirus: Not an Either/​Or Proposition