Since May 2013, Fed taper talk has fluctuated between hot and cold. When it’s hot, the markets anticipate a monetary tightening and prices become volatile.

Recently, speculation about just when the Fed will increase interest rates has reared its head, again. Since early 2013, I have said that the Fed would not act until late 2015. Well, it’s now approaching that date and I think the Fed will act, but later, rather than earlier.

The U.S. monetary stance remains schizophrenic and tight. In consequence, the U.S. remains in a growth recession — growing, but below the trend rate.

The U.S. monetary stance remains schizophrenic and tight. In consequence, the U.S. remains in a growth recession — growing, but below the trend rate. The CFS Divisia M4 — the most important measure of the money supply for those of us who embrace a monetarist approach to national income determination — is growing at an anemic year-over-year rate of 2.8 percent.

How could this be? After all, over the past few years, the Fed has been engaged in the largest quantitative easing program in its history. To find explanations, we must revert to John Maynard Keynes at his best. Specifically, we must look at his two-volume 1930 work, A Treatise on Money. Keynes separates money into two classes: state money and bank money.

Today, bank money accounts for about 80 percent of the total U.S. money supply, measured by M4. Anything that affects bank money dominates the production of money. So, we must look at bank regulations — courtesy of the Basel regulatory procedures and the Dodd-Frank legislation. These new regulations have been ill-conceived, procyclical, and fraught with danger. Indeed, bank money, the elephant in the room, has been struggling under a very tight monetary policy regime since the financial crisis of 2008–2009. This has forced the Fed to keep state money on an ultra-loose leash. The net result of this schizophrenic, tight monetary policy stance has been a sluggish growth rate in broad money and a continued growth recession, absent inflation, in the U.S.. The accompanying chart tells that tale. But, that's not the only one swirling around Washington D.C.. 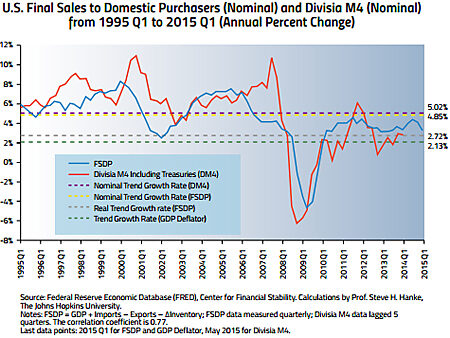 In 2013, the U.S. government decided that the greenback needed a facelift. That didn’t raise eyebrows. But, Treasury Secretary Jack Lew’s June 17th announcement did. That is when Secretary Lew shocked many by proclaiming that Alexander Hamilton (1755-1804) — the first and foremost Treasury secretary — would be demoted and share the ten-dollar bill with a yet unnamed woman. While this shocked many, it shows how political currency can be.

Just how great was Hamilton? A recent scholarly book by Robert E. Wright and David J. Cowen, Financial Founding Fathers: The Men Who Made America Rich, begins its pantheon of greats with a chapter on Alexander Hamilton. It is aptly titled “the Creator.” But, I am getting ahead of the story.

A graduate of King’s College (now Columbia University), Hamilton began his professional career as George Washington’s Chief of Staff during the Revolutionary War. During his varied career, Hamilton was a profound journalist. His most famous journalistic project was a series of 85 opinion pieces that called for the ratification of the Constitution. These essays are called The Federalist Papers, and are the most cited sources by the U.S. Supreme Court. The Federalist Papers were published in 1787 and 1788 in New York City’s Independent Journal. These important essays — written under pseudonyms by Alexander Hamilton, James Madison and John Jay — were of very high quality and set the stage for the Constitutional Convention and the resulting product. In passing, it is worth mentioning that Hamilton organized this project, wrote most of the essays, and, of all the Founding Fathers, performed most of the intellectual work for the least historical credit. That said, two notable economists have given Hamilton his due. Lionel Robbins thought The Federalist Papers were “the best book on political science and its broad practical aspects written in the last thousand years.” And if that were not enough, Milton Friedman wrote in 1973 that The Federalist Paper, No. 15, written by Hamilton, “contains a more cogent analysis of the European Common Market than any I have seen from the pen of a modern writer.”

Hamilton's prowess as a writer and journalist wasn't a one-shot affair. He drafted a large part of George Washington's famous Farewell Address, which was published in the American Daily Advertiser. And only three years before his untimely death, resulting from a wound inflicted in a duel with Aaron Burr, Hamilton founded the New-York Evening Post.

Alexander Hamilton was also a distinguished lawyer. He took on many famous cases out of principle. After the Revolutionary War, the state of New York enacted harsh measures against Loyalists and British subjects. These included the Confiscation Act (1779), the Citation Act (1782) and the Trespass Act (1783). All involved the taking of property. In Hamilton's view, these acts illustrated the inherent difference between democracy and the law. Even though the acts were widely popular, they flouted fundamental principles of property law. Hamilton carried his views into action and successfully defended — in the face of enormous public hostility — those who had property taken under the three New York state statutes.

After the Constitution was ratified and George Washington was elected President, the new federal government lacked credibility. Public finances hung like a threatening cloud over the government. Recall that paper money and debt were innovations of the colonial era, and that once the Revolutionary War began, Americans used these innovations to the maximum. As a result, the United States was born in a sea of debt. A majority of the public favored a debt default. Alexander Hamilton, acting as Washington's Secretary of the Treasury, was firmly against default. As a matter of principle, he argued that the sanctity of contracts was the foundation of all morality. And as a practical matter, Hamilton argued that good government depended on its ability to fulfill its promises.

Hamilton won the argument and set about digging the country out of its financial debacle. Among other things, Hamilton was — what would today be called — a first-class financial engineer. He established a federal sinking fund to finance the Revolutionary War debt. He also engineered a large debt swap in which the debts of individual states were assumed by the newly created federal government. By August 1791, federal bonds sold above par in Europe, and by 1795, all foreign debts had been paid off. Hamilton's solution for America's debt problem provided the country with a credibility and confidence shock.

Hamilton's legacy is — like it or not — the U.S. federal system of government. It follows rather closely the outlines laid out by Hamilton and his fellow Federalists. This, of course, probably makes Hamilton's life-long nemesis, fellow Founding Father and President Thomas Jefferson, turn in his grave. And Jefferson is not alone. Indeed, Hamilton was, and always has been, a lightning rod. In consequence, Hamilton's fame has experienced ups and downs.

When Hamilton died in 1804, Jeffersonians seized the opportunity to launch a smear campaign to diminish the reputation of their rival. This campaign was effective. Hamilton's reputation slumped from his death until the 1860s.

Once the Civil War broke out, Hamilton's star rose. His popularity began to surge in the North because he had been an active abolitionist. His fame would peak during the Gilded Age (1873-1900), a time when America experienced unprecedented industrialization and the spread of high finance — both Hamiltonian features.

With the U.S. stock market crash in 1929 and the Great Depression, Hamilton's star plummeted, as Hamilton's name was associated with Wall Street, banking, and high finance. It is not surprising that Hamilton proved to be an inviting target. Indeed, Franklin Delano Roosevelt, in his 1932 Commonwealth Club Address, lambasted Hamilton.

Hamilton would stay down until 1982, when the Federalist Society was founded during the first Reagan administration. Hamilton's image remained on the upswing until the Great Recession of 2009.

The current crisis brought with it the anti-Wall Street, anti-bank, and anti-capitalistic sentiments. And, yes, Hamilton's fame took a hit, once again. To relegate the great Hamilton to a bit part on the $10 bill is going too far, however. But, when it comes to currencies, we should never be surprised by what politicians can serve up.