Wars wreak havoc; life, property, and dreams are destroyed. In the process, wars — including civil wars, like Syria’s— progressively consume a country’s accumulated capital stock, too. In other words, as wars rage on, the destructive war economy gradually eats away at productive assets like land, factory capacity, and raw materials. Just where this process leads was well illustrated by the great Austrian economist, Prof. Fritz Machlup, in a 1935 article about Austria’s World War I inflation:

In Machlup’s parable, “copper” represents the capital in an economy. Over time, war consumption and inflation eat up the economy’s physical capital. And, without capital, peoples of war‐​torn lands face a bleak future. Alas, when the dust finally settles in Syria, new questions will have to be addressed. Indeed, Syrians will be left asking, “where’s our capital?” Yes, Syria’s “seed corn” will be nowhere to be found.

Indeed, Syria’s inflation rate is currently one of the highest in the world.

Some of the costs of war are hidden under a shroud of inflation. But, inflation, too, is a problem — one that always accompanies civil wars. But, why?

Let’s start with a typical bogus explanation for inflation troubles — one that is often trotted out by governments dealing with civil‐​war induced inflation — shifting the blame. True to form, the Syrian Deputy Prime Minister for Economic Affairs, Qadri Jamil, claimed that Britain, Saudi Arabia, and the United States were engaged in a conspiracy to undermine the Syrian pound by flooding Lebanon and Jordan with counterfeit Syrian pound notes.

In the case of Syria, Jamil’s explanation for Syria’s inflation problems is as phony as a counterfeit pound. Nevertheless, during civil wars, it is a standard refrain.

So, what about the real causes of inflation during civil war? During a war, government expenditures typically must increase, or at least remain the same. After all, the army must be fed, war materiel must be purchased, civil servants must be paid, subsidies for basic food and fuel items must continue, and so on… While government expenditures remain robust during civil war, the sources of government finance become, well, problematic. The tax system and government administration begin to break down, and tax revenues dry up. Bond financing is nowhere to be found, since investors don’t want to invest in a country that is at war with itself.

Often, combatants, including the central government, pass the begging bowl, seeking foreign aid to fill the fiscal gap. In the case of Syria, officials claim that the government has been receiving a total of $500 million per month from China, Iran, and Russia. That is an obvious source of finance, but others are not so obvious.

For example, when economic sanctions are imposed on a country like Syria, smuggling and other illegal activities run rampant. Misha Glenny, in his fascinating account of the Balkan wars in the 1990s — contained in McMafia: A Journey through the Global Criminal Underworld (Random House, 2008) — makes the following little understood point:

The profits generated by sanctions busting and other nefarious activities were split between the state and the deep pockets of the mafia. So, the Milosevic war machine was financed, to some extent, by smuggling and other illegal activities. This, no doubt, is playing a role in Syria, too.

But, at the end of the day, as a civil war rages, these sources of funds fail to come close to the level of government expenditures. What to do? Well, the government simply orders its central bank to start the printing presses and fill the deficit gap. It is this surge in the supply of money that generates higher inflation rates.

Indeed, Belgrade's Top cider Mint was working at full capacity, turning out bank notes that were worthless before the ink had dried. Finally, the mint's physical capacity began constraining inflation. The authorities could not print enough cash to keep up. On 6 January 1994, the dinar officially collapsed. Over the past year, Syria has been forced to let the central bank's printing presses roll, though not to the extent they didin Yugoslavia. Nevertheless, the central bank has turned on the money pumps. In consequence, the Syrian pound has slumped, and inflation has soared.

Indeed, Syria's inflation rate is currently one of the highest in the world. How high? Well, if you just read reports in the press, it's difficult to put your finger on the exact current inflation rate. Many press reports use dated official inflation rates, while others use "guess-timates" made by Syrian officials. But, often within the same reportage, people in the souk recount the change in prices of particular goods, and these changes typically imply a much higher inflation rate than official inflation figures. What, then, are we to make of Syria's inflation picture? The first thing that must be done is to clear away the conceptual confusion surrounding inflation. If there are no price controls in a country, then its inflation is termed to be "open"inflation. But, there are price controls in Syria. So, Syria is experiencing what is termed "suppressed" inflation. 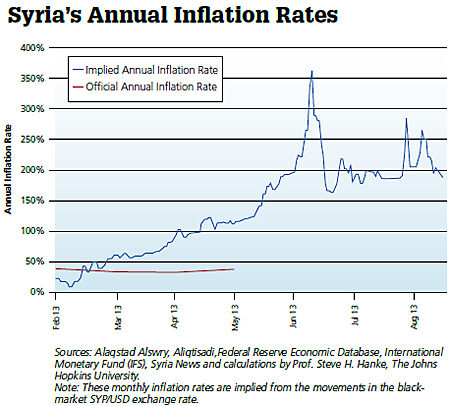 If you are lucky to find a price-controlled item on the shelf in Damascus, its price will be suppressed, by law, at artificially low levels. But, as any economist worth his salt knows, price controls ultimately lead to shortages, depriving many consumers of access to essential goods.

For those measuring prices, these shortages create problems, because the "basket" of goods used to measure inflation will be lighter and lighter as shortages grow. In consequence, the real price of the basket of goods actually increases. And, that's not all. Some goods that are sold on official markets, under price controls, are later resold at higher, free-market prices on the black market. 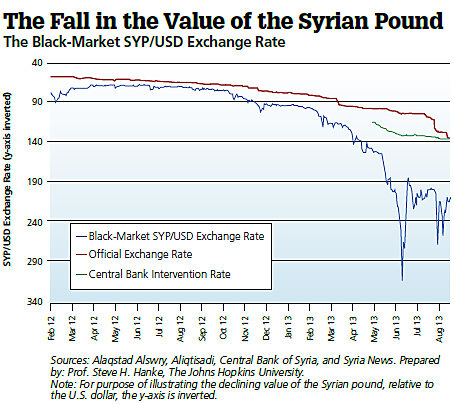 For example, recent reportage by Sam Dagher, the Wall Street Journal's man in Damascus, indicated that people who purchase controlled-price bread are becoming bread traders. They purchase a pack of bread for fifteen pounds, and then resell it for 50 pounds — that's a 233% price increase. So, which price should be used to indicate Syria's inflation rate, the "suppressed" price or the "open" price?

To cut through this thicket of confusion, I have developed a way to estimate open inflation rates in countries which have suppressed prices. First, we go to the most important price in the economy — the exchange rate. In Syria's case, the key rate is the black-market Syrian pound / U. S. dollar rate. The accompanying chart illustrates the pound's slide that has resulted from Syria's civil war.

Following U. S. Secretary of State John Kerry's saber-rattling statements on the 26th of August, the value of the Syrian pound zigged and zagged a great deal. Indeed, the pound lost 24. 7% of its value against the U. S. dollar in the two days following Kerry's announcement. Then, on August 29th, we saw a sharp reversal in the course of the pound. Why? We need look no further than the eroding support for a U. S. -led strike against Syria. Yes, the United States had lost support from important allies, the United Kingdom, Canada, and Italy. At present, the diplomatic tango taking place between the United States, Russia, and Syria has brought some semblance of stability to the pound, at least for now. As Obama, Putin, Assad, et al. continue to negotiate a potentially war-averting chemical weapons deal, the black-market Syrian pound / U. S. dollar exchange rate is hovering around 210, indicating that Syrians are holding their breath — just like everybody else.