In 1944, the Bretton Woods Agreement established a new global monetary system. Its hallmark was exchange‐​rate stability. That stability was accompanied by a general acceleration of growth in the post‐​war golden age. By 1973, the system had been swept into the dustbin by the broom of President Nixon. With that, the world entered an era of flexible, unstable exchange rates, or what my good friend, the great Jacques de Larosière terms an anti‐​system.

This exchange-rate instability creates problems—big problems. For example, as we “celebrate” the tenth anniversary of the Lehman Brothers bankruptcy, we should ask, were exchange rates stable back in the fall of 2008? As it turns out, one of the few who had a laser focus on what he deems the most important price in the world, the dollar-euro exchange rate, was another good friend, Nobelist Robert “Bob” Mundell. A founding father of supply-side economics, Bob is always focused on prices. That certainly separates Mundell from Ben Bernanke, who was Chairman of the Federal Reserve back in September of 2008. Bernanke saw fit to ignore fluctuations in the value of the dollar. Indeed, changes in the dollar’s exchange-rate value did not appear as one of the six metrics on “Bernanke’s Dashboard”—the one the Chairman used to gauge the appropriateness of monetary policy.

Well, let’s take a look at what Mundell saw in the months surrounding the collapse of Lehman. He observed a wild swing in the dollar-euro exchange rate (see the table below). In the July-November 2008 period, the greenback appreciated almost 24% against the euro. Accompanying that swing was an even sharper one in the price of oil. It plunged by 57%. Gold, too, had a sharp fall of almost 22%. And, consistent with Mundell’s supply-side theories, changes in exchange rates transmit inflation (or deflation) into economies, and they can do so rapidly. Not surprisingly, then, the annual rate of inflation in the U.S. moved from an alarming rate of 5.6% in July 2008 to an outright deflation of 2.1% a year later. This 7.7 percentage-point swing is truly stunning.

So, in terms of monetary policy, Mundell saw the obvious: the Fed was too tight—massively too tight. The dollar was soaring, and commodity prices were collapsing. Fed Chairman Bernanke saw none of this because exchange-rates weren’t even on his dashboard. Alas, the Fed’s massive monetary squeeze and resulting unstable dollar forced Lehman Brothers to the wall.

It’s time to jettison the international anti-system and go for stability. We might just have the right man at the U.S. Treasury to engineer such a change. Over the years, my friend David Malpass, the Undersecretary for International Affairs, has thought and written about our current anti-system. Malpass favors stability. Writing in the Cato Journal in 2005, he had this to say, “Clearly, a ‘stable’ currency, not strong or weak, is appropriate during most of a country’s economic life.” Then, in a 2008 piece in the Wall Street Journal, Malpass wrote, “The elephant in the living room—the topic Washington won't broach—is the dollar itself as a powerful but unused monetary policy tool. The Fed didn't mention the dollar in its Dec. 11 rate-decision communiqué, nor in its November economic forecasts. In his recent 500-page memoir, and his Dec. 13 opinion piece on this page, former Fed Chairman Alan Greenspan barely mentions the wide swings in the value of the dollar—probably the most important economic and investing variable in the last decade—and their causal connection to first deflation and now inflation.” Well, Malpass had his opportunity to insert some Malpassian language in the G20’s most recent communiqué of March 2018. The key sentence reads: “We recognise that excessive volatility or disorderly movements in exchange rates can have adverse implications for economic and financial stability.”

Malpass is not alone. Last year, to determine whether there was corporate concern about exchange-rate instability and its associated risks, I tasked two of my assistants, Zackary Baker and Cameron Little, with what was an onerous job. They read every annual report of the 100 largest U.S. Companies to determine if the companies noted exposure to foreign exchange risk, whether they hedged those risks, and whether they quantified their foreign exchange losses.

As the chart below indicates, 100% of the largest U.S. companies indicated an exposure to foreign exchange risks, with 80% indicating that they quantified their losses. I presented these findings at a Kemp Forum on Global Economic Growth in Washington, D.C., and concluded with the obvious: U.S. corporations should provide a strong coalition to support a new system that would ensure more exchange-rate fixity and predictability. 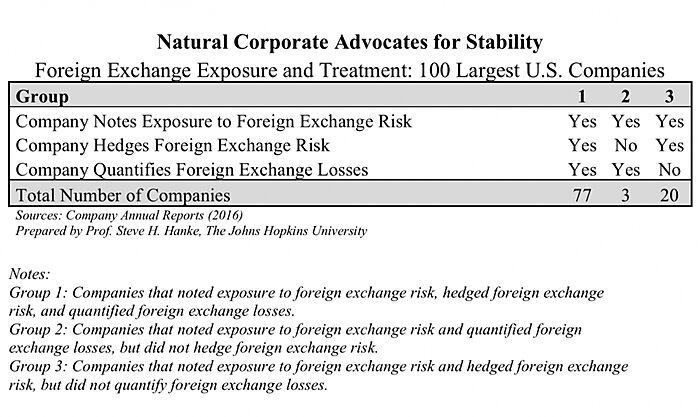 So, what has to be stabilized? The world’s two most important currencies — the dollar and the euro — should, via formal agreement, trade in a zone of stability ($1.20 – $1.40 per euro, for example). Under such an agreement, the European Central Bank (ECB) would be obliged to maintain this zone of stability by defending a weak dollar via dollar purchases. Likewise, the U.S. Treasury (UST) would be obliged to defend a weak euro by purchasing euros. Just what would have happened under such a system (counterfactually) since the introduction of the euro in 1999 is depicted in the chart below. When the euro-dollar exchange rate was less than $1.20 per euro and the euro was weak, the UST would have been purchasing euros (in the 1999 - 2003 and the 2014 - 2018 periods). When the euro-dollar exchange-rate was above $1.40 per euro and the dollar was weak, the ECB would have been purchasing dollars (in some of the 2007-2011 period). 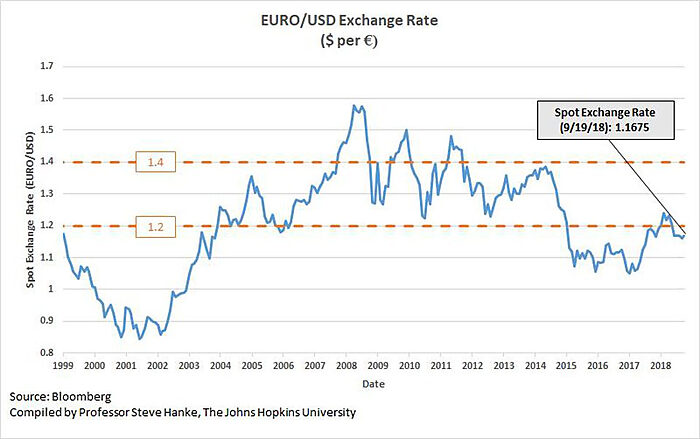