People love ranking stuff and poring over rankings, from best beaches to worst public restrooms. State elementary and secondary education systems are not immune to the obsession, with the education news outlet Education Week, and the king of rankings U.S. News and World Report, furnishing two high‐​profile examples. But new rankings from University of Texas at Dallas professor Stan Liebowitz and graduate student Matthew Kelly, published by the Cato Institute, challenge those assessments. While other rankings may give credit for achievement scores without considering important differences in state populations, or seem to assume that greater inputs necessarily mean better education, Liebowitz and Kelly compare achievement for similar groups across states, and how efficiently those levels are achieved. They aim to be more apples‐​to‐​apples, and bang‐​for‐​the‐​buck.

State rankings are, frankly, of limited value. But if we’re going to have them, at least one set ought to focus on more fair comparisons, and efficient use of hard‐​earned taxpayer dollars.

The table below is the papers’ ultimate ranking. It is based first on how several racial and ethnic groups compare to each other across states, which is more fair to states with greater populations of people who have suffered discrimination, or who might have higher concentrations of non-native English speakers. It also accounts for spending adjusted for state cost of living. The goal is to identify the best outcomes per dollar spent rather than assume that spending more taxpayer money must be good. This vaults largely southern states, including top-three Florida, Texas, and Virginia, into the highest slots. In Education Week’s most recent “Quality Counts” ranking, in contrast, Massachusetts, New Jersey, Connecticut are the top states, and Florida, Texas, and Virginia place 26th, 41st, and 10th. In the 2018 US News ranking Massachusetts, New Hampshire, and New Jersey take the top slots, with Florida 40th, Texas 33rd, and Virginia 12th. 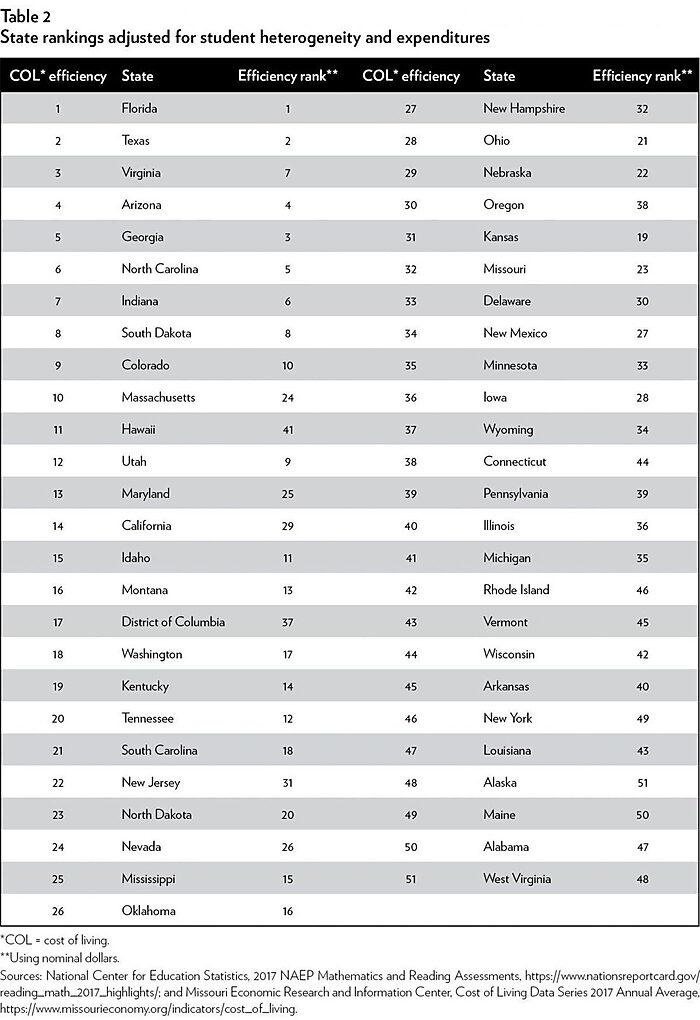 So should all Americans pack up their belongings and run, not walk, to Florida, Texas, and Virginia to get great k-12 education? Not so fast. As the authors note, rankings are, frankly, blunt instruments that mask wide variation among districts within states, and among schools within districts. You could move into a “good” district in a “bad” state, or a “bad” district in a “good” state. And I use scare quotes not to frighten but to highlight that there is also widespread disagreement about what constitutes “good” or “bad” education. There seem to be appreciable limits to what test scores tell us, for instance; increasing research suggests higher scores don’t necessarily correlate with other desired outcomes such as high school graduation, or college completion. And some families may value things like a school fostering critical thinking, or strong morals, more than standardized test numbers, or how many grads are admitted to Ivy League institutions.

State rankings are, frankly, of limited value. But if we’re going to have them—and alas, we love them so!—at least one set ought to focus on more fair comparisons, and efficient use of hard-earned taxpayer dollars. These rankings do those things.