Regulations of school voucher programs can be well‐​intended. Policymakers may hope to prevent “bad” schools from operating or may limit schools’ ability to be selective in their admissions procedures in the name of establishing equal access to private options. But do top‐​down regulations of school voucher programs come with any unintended consequences? Our just‐​released study suggests some do.

These overall results largely mirror what we found in our previous experiment in Florida. Statistically significant overall effects can be found in the figures below. 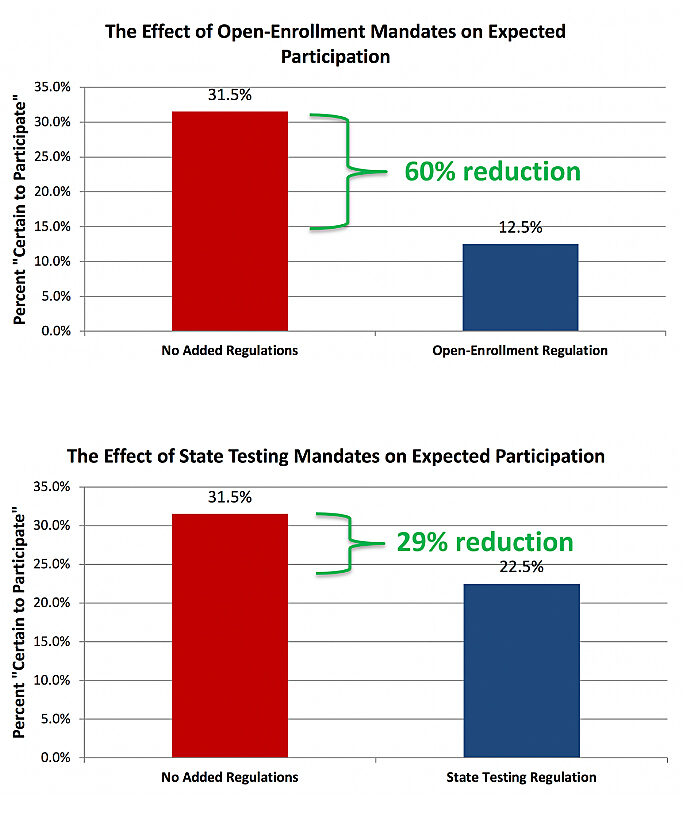 However, using four different measures of school quality — Google review scores, GreatSchools review scores, tuition levels, and enrollment trends — we did not find any statistically significant evidence to suggest that any of the regulations improved the average quality of participating private schools by disproportionately deterring lower-quality schools from participating.

In fact, the only marginally significant result detected indicated that state standardized testing requirements were more likely to deter private schools with higher Google review scores. Specifically, one model found that a one-point (on a five-point rating scale) increase in Google review scores was associated with a 14.5 percentage point larger negative effect of the state testing mandate on anticipated program participation for higher quality schools compared to lower-quality ones. As we’ve hypothesized before, regulations could actually reduce the average quality levels of participating private schools. Lower-quality private schools may be more likely to participate in voucher programs, regardless of the additional regulations, because they are more likely to be in great need of financial resources and enrollment.