Even after watching the chaos produced in Afghanistan, Iraq and Libya following regime change, some in Washington have continued to advocate similar policies toward Venezuela, Iran, North Korea and elsewhere. The belief that removing a foreign government can quickly and easily promote U.S. interests by force still resonates, as we have most recently seen in the response to the escalating tensions with Iran. And that is far from the only example.

The recently released Afghanistan Papers highlight how, for years, overly optimistic policymakers misled the public about the prospects of building a viable Afghan state. Implicit in most of the documents is a feeling that, with the correct strategy or more investment, the war in Afghanistan could have succeeded.

Yet the Afghanistan war was not exceptional. It simply continued the trend of regime change leading to adverse outcomes rather than greater U.S. security.

Regime change operations are a roll of the dice that are unlikely to produce a winner.

Forcible regime change, or using military force to overthrow a foreign government, can be enticing when a regime appears to be threatening U.S. security. The logic is that when a regime continues to work against U.S. interests, replacing the regime can be a quick and easy way to change this pattern rather than sustained military action or diplomatic negotiation.

The problem, however, is that a resounding amount of research has shown that regime change rarely succeeds. Regardless of the goal, regime change mostly fails to produce better economic conditions, build lasting democracy or promote more stable relations to advance U.S. interests. From Haiti and the Dominican Republic in the 1910s, to South Vietnam in the 1960s, to Iraq in the 2000s, the United States failed to achieve these goals over 110 years of regime-change missions.

And when regime change does not achieve these goals, it can provoke a civil war — as it did in Congo following the regime change mission in Léopoldville (now Kinshasa) in 1960 to oust Prime Minister Patrice Lumumba — degrade respect for human rights and create more instability. Worse, rather than being a quick and easy policy success, the instability created after a regime is deposed often leads to lengthy nation-building projects that policymakers never intended.

There have been some successful cases of regime change, such as in Germany and Japan after World War II. Some argue that regime change succeeded in these cases because of sustained and substantial economic investment, such as the Marshall Plan, or because of the correct state-building strategy. These earlier successes had more to do with the preconditions in both countries, such as previous experience with democracy, a robust existing government bureaucracy or high economic modernization. Rather than prototypical cases of regime change, they are exceptions that prove the rule: Even with the best conditions present, regime change is difficult and requires massive investment.

Unfortunately, proponents of forcible regime change continue to claim that it can be quick and cheap and will not expand into the lengthy and costly missions that have taken place in Afghanistan and elsewhere. Instead of admitting that they do not know what local conditions will look like after a change of regime, policymakers often ask local opposition movements, who tell them what they want to hear rather than an unbiased picture of what is most likely to happen. This encourages over-optimistic assumptions and biased thinking about how the mission will go, and less consideration of the costs if it turns out differently.

To avoid future quagmires, policymakers need to recognize that regime change operations are a roll of the dice that are unlikely to produce a winner. Given the human, economic and security costs that accompany these poor odds, policymakers must instead ask whether regime change would still be worth it if it is not the quick mission they envision.

Following the mission to oust Moammar Gaddafi in Libya in 2011, President Barack Obama resisted calls to overthrow Bashar al-Assad in Syria, in part, because there was no credible guarantee it would not devolve into the same chaos as found in Libya or Iraq. Similarly, instead of focusing on how desirable regime change in a particular country might be, policymakers need to ask whether the small chance of success is worth the high probability that regime change will produce a dysfunctional state that still poses a security threat.

As the fallout from the killing of Iranian Maj. Gen. Qasem Soleimani continues to unfold, regime-change advocates will once again argue this is the first step toward removing the current regime in Tehran. But a key lesson to take from the Afghanistan Papers and more than a century of history is that a better strategy for regime change will not improve the chances that it will succeed. Instead, only by avoiding regime change altogether can the United States avoid future Afghanistan-like quagmires.

Regime Change Is a Hard Habit to Break 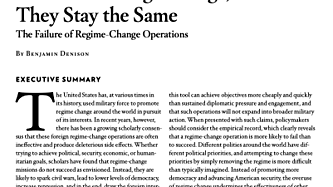