Recently, I came across a stunning statistic. By mid‐​century, there will be more Nigerians than Americans. Nigeria is one of the world’s worst run countries and its unemployment rate hovers around 24 percent. A dysfunctional country and an exploding population do not mix very well. What is true of Nigeria is also true of large parts of the African continent.

As we speak, one out of seven inhabitants of the planet lives in Africa. By mid-century, one in four people on Earth will be African. If the current trends continue, somewhere between one third and one half of the world's population will live in Africa by 2100. African unemployment is not easy to guesstimate, but South Africa, the continent's economic powerhouse, suffers from an unemployment rate of 27 percent. How, I wonder, are all of these people going to make a living? 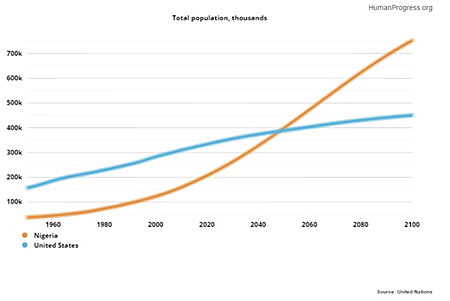 This column is, generally speaking, the very definition of optimism. I am, for example, largely sanguine about the impact of automation on America's unemployment rate. Our country has lived through profound economic changes in the past and risen to the challenge. At the time of the American Revolution, for example, over 90 percent of Americans worked in agriculture. As late as 1900, 40 percent of Americans did so. Today, 1.5 percent do, while feeding the country as well as much of the rest of the world too. All that surplus labor was soaked up by manufacturing and, later, services. Adjusted for population growth, a record number of Americans today has a job, dislocation emanating from the IT revolution notwithstanding.

Relatively speaking, the United States is well placed to deal with automation, robotics, and perhaps even artificial intelligence. Our state-run primary and secondary education systems sucks, but American universities are second to none and the number of college-educated Americans is at an all-time high. We have a decent legal system and business environment. The welfare state, while technically bankrupt, can provide a cushion for the temporarily unemployed in extremis (and after cuts elsewhere). That does not mean that America does not need reforms, hence the "relatively speaking" at the start of this paragraph. But we are in better shape to face the challenges of the future than many other nations. 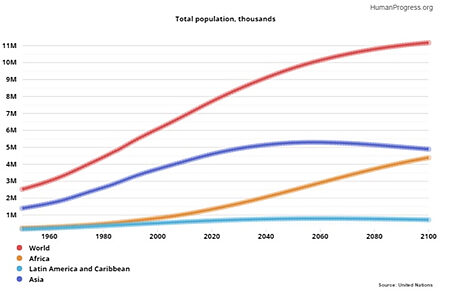 Unfortunately that is not true of Africa. The African legal system, the African business environment, and all levels of Africa's state-provided education are, compared to the rest of the world, abysmal. The continent is far too poor to afford even a rudimentary social welfare net. So what are the hundreds of millions of people, mostly young, to do in the coming decades?

Nigeria will have a higher population than the U.S. by mid‐​century, when one in four people on Earth will live in Africa.

Much of Asia has escaped from poverty through labor‐​intensive and export‐​oriented industrialization. Africa, by contrast, is actually de‐​industrializing. This is not happening because of free trade, since Africa remains the least economically free region in the world. Rather, African workers cannot compete with much more productive Asian labor due to a number of factors that include lack of decent education and skills, bad financial and transport infrastructure, Byzantine bureaucracy and heavy regulation, and so on.

To make matters worse, automation and robotics are bound to make Africa’s workers even less competitive in the future. Simply put, it is difficult to see how the Asian route out of poverty can be repeated on the African continent. And in order to leapfrog Asian‐​style industrialization into an American‐​style modern economy, Africa would need well‐​functioning rule of law, property rights, and a welcoming business environment. It has none of those.

That leaves agriculture, but even here the outlook is not promising. The continent is rapidly urbanizing and few Africans see their future in farming. In any case, farming in the rest of the world is increasingly dominated by large and mechanized agricultural concerns, not small and labor‐​intensive farms. So, again, where will the African jobs of the future come from? I do not know, but the prospect of between one third and one half of humanity living on a continent without the prerequisites for succeeding in the 21st century economy strikes me as a reason for concern.

Human Progress Saved My Baby, and Will Save Many More