When it comes to infrastructure, BlackRock’s CEO, Larry Fink, has it right. The head of the world’s largest asset management company, and a member of President Trump’s Strategy and Policy Forum, is beating the privatization drums. As Fink recently put it: “These [infrastructure] projects must deliver competitive returns and that will often require efficiencies that can only be achieved through private ownership.” Hopefully Fink delivered that message at yesterday’s Strategy and Policy Forum at the White House.

It’s as if Fink lifted a page from Adam Smith’s The Wealth of Nations (1776). In that classic, Smith wrote, “No two characters seem more inconsistent than those of trader and sovereign.” Smith argued that public ownership and administration were negligent and wasteful because public employees do not have a direct interest in the commercial outcome of their actions. Indeed, they have no skin in the game. To prove his point, Smith stressed that publicly‐​owned lands in Europe were only 25% as productive as comparable private lands.

Public infrastructure as a portion of GDP has drifted downward over the past half‐​century. President Trump wants to change that trend, or at least stabilize it.

Comparative cost analyses of private versus public provision of goods and services support Smith’s conclusion. Considerable evidence shows that the cost incurred in publicly providing a given quantity and quality of output is about twice as great as in private provision. This result occurs with such frequency that it has given rise to a rule-of-thumb: “The Bureaucratic Rule of Two.”

But, just how does one introduce and maintain competition in the infrastructure field? After all, for many infrastructure projects, a monopoly will often naturally emerge because a single firm can produce goods and services more cheaply than multiple firms. For example, multiple ports, airports, bridges, etc. at the same location are not economically viable.

To ensure that competition prevails, a system of competitive bidding for privately-owned infrastructure franchises, as first articulated by Edwin Chadwick in 1859 and as widely practiced in France today, is the way to go. Though competition within a market may be impossible, the benefits of competition for that market may be attainable.

To implement this system, the government need only create a buyers’ agency with a mandate both to conduct the auction and to devise the contracts for the construction, maintenance, or operation of the facilities.

Once in place, the franchisee will have every incentive to aggressively control costs, adopt new technologies, etc., since every dollar of cost saved is an extra dollar of profit earned.

If the firm’s managers are not attentive to cost control, the firms’ profits would fall, share prices would decline, and the firm would become a ripe target for takeover.

As the chart below shows, public infrastructure as a portion of GDP has drifted downward over the past half-century. President Trump wants to change that trend, or at least stabilize it. Larry Fink has the right idea: privatize infrastructure. The trick will be to develop a “smart” infrastructure program. 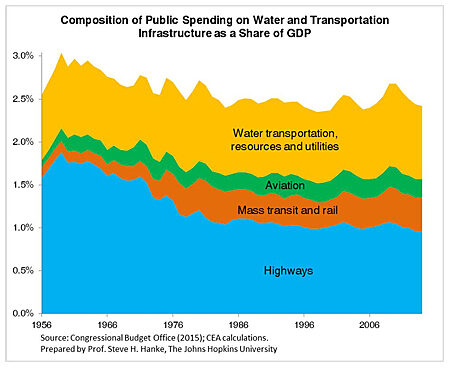