China is slowing down. Forget all the reported statistics and those that have recently been discontinued — like Guangdong’s monthly purchasing managers’ index — money and credit tell the tale. Indeed, there is a strong link between the broad money growth in China and nominal GDP growth. For example, during the 2003–2017 period, the money supply (M2) grew at an average annual rate of 14.92% and nominal GDP grew at a 14.67% annual rate.

The chart below indicates that both money and credit growth rates in China have declined rapidly over the past two years and are well below their trend rates of growth. The money supply (M2) rate of growth is only about 8% yr./yr.; whereas, its trend rate is nearly double that. 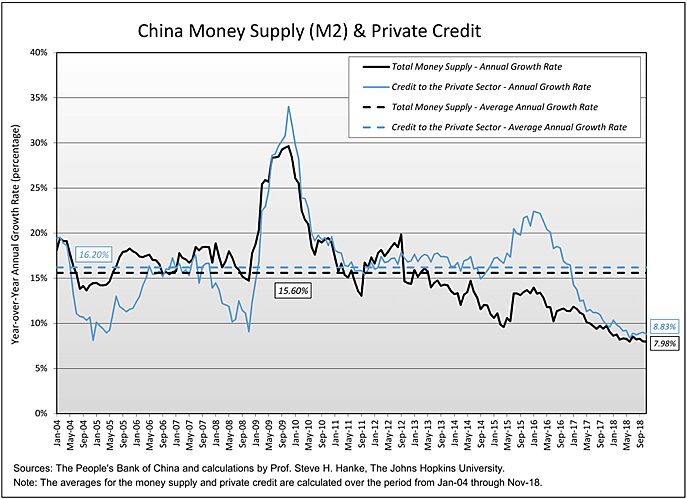 So, China's economic slowdown is baked in the cake. In addition to that, deepening international trade tensions and the heightened degree of nervousness among the Chinese public set the stage earlier this week for President Xi's address to some 3,000 officials and guests in the Great Hall.

The occasion for Xi's much anticipated address was the 40th anniversary of China's opening towards a more capitalist, market-oriented economic system — an opening that was presided over by the late Deng Xiaoping. The ensuing doses of capitalism worked their magic and have fueled the world's greatest economic leap forward on record.

China's leap forward has been documented and analyzed by my good friend and the late Nobel Laureate Ronald Coase and his co-author Ning Wang in How China Became Capitalist (Palgrage Macmillan, 2012). Of note is the fact that Coase celebrated his 101st birthday in 2012, the year in which this brilliant, and Coase's last, book was published.

Contrary to Chinese Communist Party propaganda, which holds that the Party's "visible hand" was responsible for China's rise, Coase and Wang show that it was Adam Smith's "invisible hand" that did the trick in China.

Coase and Wang prove that China's embrace of capitalism and free markets was driven by four "marginal revolutions." First, there was the "household responsibility system" in agriculture. This arose spontaneously and allowed farmers to sell some of their products at free-market prices. The second revolution was in townships and villages, where they were allowed to operate like businesses that produced and sold output at market prices. The third revolution allowed budding entrepreneurs to participate in the "individual economy" (read: the private, free-market economy). And the fourth revolution involved setting up "special economic zones" — most notably in the Guangdong and Fujian provinces, such as in the city Shenzhen, and in many coastal cities, like Shanghai.

As a result of these revolutions, Coase and Wang concluded that a vibrant non-state sector arose like a phoenix in China and stood in sharp contrast to the stagnant state sector. In short, China's phenomenal growth story is one of incremental openings to capitalism and free markets. The Chinese lesson is clear: to grow, you must liberalize the economy.

Apparently, President Xi has rejected Nobelist Coase's facts and analysis. During his address, Xi dusted off the well-worn Communist Party, Marxist-Leninist doctrine. As Xi put it, "Let contemporary Chinese Marxism shine even more brilliant rays of truth." He stressed that everyone must worship at the altar of the Communist Party, and that there would be no debate about the Party's visible hand that would control the economy and defend the state sector (read: zombie state-owned enterprises).

Although President Xi presented no specifics, he was clear that the Coasian capitalist party never occurred, or if it did, that it was over. There is only one party in China: The Communist Party.