In the wake of George Floyd’s brutal, senseless death while in the custody of Minnesota police last week, the national discussion over police accountability has begun to focus on a once‐​obscure legal rule called “qualified immunity.”

Qualified immunity is a judicial doctrine that shields public officials from liability even when they break the law. The outrage following Floyd’s killing is providing much‐​needed momentum to efforts to abolish this doctrine, and doing so would be a crucial first step toward restoring meaningful accountability for members of law enforcement. But it would also raise another major policy question that has yet to receive much attention — how to make sure those individual police officers found to have violated someone’s constitutional rights are actually held accountable.

Today, if a civil rights plaintiff does manage to overcome qualified immunity, police officers are nearly always indemnified for any judgment or settlement; that is, the money is paid by the officers’ municipal employers — i.e., taxpayers — not the officers themselves. As our political system moves ever closer to ending this unwarranted immunity for misbehaving police, it is vital to ensure that responsibility for official misconduct falls on the individuals who commit it, not the general public. That allocation of responsibility is essential both as a matter of basic justice and as an effective deterrent.”

As our political system moves ever closer to ending this unwarranted immunity for misbehaving police, it is vital to ensure that responsibility for official misconduct falls on the individuals who commit it, not the general public.

The Supreme Court invented the concept of qualified immunity in a series of opinions involving the main U.S. civil rights law, which says any state actor who violates someone’s constitutional rights “shall be liable” to the party injured. The court effectively rewrote this statute to say public officials, including law enforcement, can’t be sued unless they violated “clearly established law.” In practice, this is a high bar to meet; it requires those who want to hold officers accountable to find a case already on the books in which someone else’s rights were violated in basically the same manner.

As someone who has been leading a campaign against qualified immunity for over two years, it is with grim satisfaction that I’ve observed journalists and commentators of all stripes noting the direct connection between qualified immunity and the scandal of deaths such as George Floyd’s. The sort of shocking act committed by Derek Chauvin is the product of our culture of near‐​zero accountability for members of law enforcement.

In other words, police simply don’t expect to face consequences when they violate people’s constitutional rights. While this culture has many complex causes, qualified immunity is one of the most significant, because it severely undermines both the deterrent and the remedial effects of the statute that was supposed to be our primary means of ensuring accountability for public officials.

Now, more than 50 years after the Supreme Court first set us down this road, it looks like there are finally several viable paths for addressing this shameful state of affairs. The court itself is considering several cases raising the question of whether the doctrine should be eliminated. A stunningly diverse array of public policy organizations across the political spectrum supports the petitions that seek to end qualified immunity. As soon as Monday, we could knoww hether the justices intend to address the court’s past mistakes by taking up at least one of them.

Moreover, several members of Congress have signaled their intention to eliminate qualified immunity by legislative means. In the House, Justin Amash, I‐​Mich., and Ayanna Pressley, D‐​Mass., have announced their intention to introduce the Ending Qualified Immunity Act. And in the Senate, Democrats Kamala Harris of California, Ed Markey of Massachusetts and Cory Booker of New Jersey have introduced a resolution calling for Congress to “eliminate the qualified immunity defense for law enforcement officers.”

If either Congress or the Supreme Court abolishes qualified immunity, it would be a major victory for accountability. But it shouldn’t be considered the end of the matter, given the near‐​universal indemnification of officers. After all, the whole point of making public officials personally liable for constitutional violations is to provide a clear incentive for them to modify their behavior.

If municipal employers, at the behest of police unions, continue providing nearly automatic indemnification, then it will be the public, not culpable defendants, who end up footing the bill for police misconduct. Joanna Schwartz, a UCLA law professor, has demonstrated that out of all dollars paid out in civil rights judgments against individual officers, 99.98 percent were paid out by governments.

A better solution would be to require police officers to carry liability insurance, in the same way that other professionals, such as doctors and lawyers, do. As my colleague Clark Neily has previously explained, insurance companies are exceptionally talented at identifying risk and adjusting insurance premiums to reflect the specific risk posed by each policyholder.

In the case of police officers, the most serious misconduct may be committed by only a small fraction of the overall police force, but police union contracts make it notoriously difficult to remove even those few officers — and even if those officers are removed, they are often rehired anyway.

Requiring police to carry liability insurance could slice through this red tape. Some of the money that we spend to cover judgments against police could instead be put toward an insurance allowance for officers. But when very​high‐​risk officers see premiums go up, they would have to pay the difference out of their own pockets. If they failed to reform their behavior, those officers would eventually become uninsurable and thus unemployable.

It is the sad nature of criminal justice policy that the potential for change often comes only on the heels of terrible tragedies. But if any redemption is to be found in the death of Floyd and so many like him, it will be through reforming our laws to provide meaningful accountability for all members of law enforcement. Once we abolish qualified immunity, we also need to ensure that the officers who continue violating people’s rights are personally held to account.

How Militarized Police Can Attract the Wrong Officers 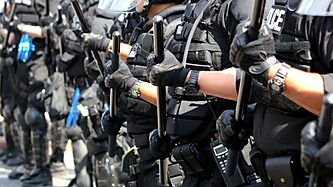