New York state is grappling with a Medicaid shortfall in the billions of dollars. And one of the main reasons is improper enrollment.

This is of increasing importance given that ObamaCare massively expanded what was historically a welfare program for vulnerable populations like the disabled and low‐​income children and pregnant women — and tens of billions of taxpayer dollars are at stake.

Excluding traditional pathways onto Medicaid (such as through disability or pregnancy), Yelowitz and I concluded that the number of working‐​age New York state residents on Medicaid who have incomes above the eligibility threshold rose by more than 80 percent between 2012 and 2017. We estimated that between 337,000 and 433,000 working‐​age New York state residents with income above the allowed limit are improperly enrolled in Medicaid.

As a result of ObamaCare’s more generous Medicaid funding, many states — including New York — have stopped properly assessing whether applicants are eligible before they enroll.

And nearly half of this improper enrollment is in New York City, with 30 percent in The Bronx and Queens, where a few neighborhoods have among the highest percentage of improper enrollees of anywhere in the country.

In The Bronx, particularly the Concourse, Highbridge and Mount Eden regions, we found that roughly 40 percent of all working‐​age adults with incomes exceeding income eligibility thresholds were enrolled in Medicaid in 2017. The next‐​worst area is in Queens — the Elmhurst/​South Corona, Jackson Heights/​North Corona and Sunnyside/​Woodside regions. In those areas, there are likely tens of thousands of ineligible Medicaid enrollees.

ObamaCare deserves much of the blame for the surge in improper enrollment. It created a new category of Medicaid recipients — lower‐​income, able‐​bodied, working‐​age adults — with the federal government paying a much larger share of their expenses than for traditional enrollees.

From 2013 — the year before ObamaCare’s Medicaid expansion took effect — to 2018, there has been a surge of Medicaid payments out of compliance with legal criteria. In fact, improper Medicaid payments more than tripled.

While states bear some of the burden for improper spending, most of the bill is picked up by the federal government. We estimated that improper payments now exceed 20 percent of federal Medicaid expenditures, an amount above $75 billion each year.

As a result of ObamaCare’s more generous Medicaid funding, many states — including New York — have stopped properly assessing whether applicants are eligible before they enroll.

While the health‐​care industry, particularly insurance companies, has benefitted from ObamaCare’s windfall of federal cash and improper Medicaid enrollment, traditional enrollees face a harder time obtaining care — and taxpayers are stuck with an enormous tab.

The inspector general at the federal Department of Health and Human Services found substantial problems with New York state’s process for reviewing Medicaid eligibility. The state made large numbers of errors and did not always maintain documentation. An audit of the entire state’s program found 15 percent of applicants improperly enrolled. The size of the error was staggering, with the inspector general estimating that New York state improperly claimed more than $1.8 billion in a six‐​month period on behalf of more than 900,000 ineligible enrollees or people who were enrolled without having submitted all the proper documentation.

In order to get a handle on its budget crisis, New York should conduct targeted eligibility reviews in The Bronx and Queens. If the state doesn’t act, the federal government must step in and require eligibility reviews in these hot spots and others around the country. Some level of government owes it to taxpayers and to those who are truly eligible to get enrollment right. 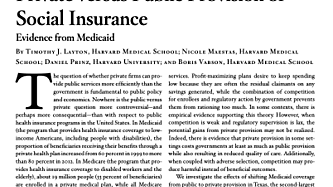 No, Medicare for All Won’t Save Money