Skip to main content
Live Now
This article appeared in the May 2016 issue of Globe Asia.
TOP

Ever since the U.S. Federal Reserve (Fed) began to consider raising the federal funds rate, which it eventually did in December 2015, a cottage industry has grown up around taper talk. Will the Fed raise rates, or won’t it? Each time a consensus congeals around the answer to that question, all the world’s markets either soar or dive.

This obsession with taper talk — the interest rate story — is simple, but strange. Indeed, it is misguided — wrongheaded. So, why the obsession? It is, in part, the result of a Keynesian hangover. The Keynesians focus on interest rates. The mainstream macro model that is widely in use today is referred to as a “New Keynesian” model. The thrust of monetary policy in this model is entirely captured by changes in current and expected interest rates (the price of money). Money is nowhere to be found, however.

The misguided focus on interest rates not only poses a problem for those who are observing the current economic environment and formulating expectations, but also for those who are interpreting important economic and market events of the past. For example, Nobelist and Keynesian Robert Shiller, in his famous book, Irrational Exuberance, comes to the conclusion that the stock market crash in 1929 was caused by the Fed’s excessively restrictive monetary policy. That’s because Shiller focuses on interest rates and thinks that the Fed’s increase in the discount rate in August 1929 signaled monetary tightening. But, as Elmus Wicker carefully documents in Wall Street, the Federal Reserve and Stock Market Speculation: A Retrospective, which was recently published by the Center for Financial Stability in New York, the Fed was accommodative, not restrictive, prior to the 1929 stock market crash.

This interest rate obsession is amazing, particularly since Keynes dedicates quite a few pages in A Tract on Monetary Reform (1923) to money and its role in national income determination. Then, in his two-volume 1930 work, A Treatise on Money, Keynes devotes a great deal of space to banks and their important role in creating money. In particular, Keynes separates money into two classes: state money and bank money. State money is the high-powered money that is produced by central banks. Bank money is produced by commercial banks through deposit creation.

Keynes spends many pages in The Treatise dealing with bank money. This isn’t surprising because, as Keynes makes clear, bank money was much larger than state money in 1930. Well, not much has changed since then. Today, bank money accounts for almost 82 percent of the broad money supply (M4) in the United Kingdom.

We should keep our eyes on money broadly measured (state, plus bank money), and money properly measured (when available, Divisia, not simple sum measures). A monetary approach to national income determination is what counts over the medium term. The link between growth in the money supply and nominal GDP is unambiguous and overwhelming. Never mind. There remain plenty of deniers of basic principles and centuries of clear evidence.

Since the collapse of Lehman Brothers in 2008, there has been a dramatic change in monetary policies in most parts of the world. Bank regulations have been tightened and supervision has become much more severe. Large-scale bank recapitalizations and deleveraging have become the order of the day. These policies, which impact the production of bank money, have been ultra-tight and procyclical.

In an attempt to expand the total supply of broad money, many central banks have had to engage in quantitative easing (QE). This state money policy is ultra-loose and countercyclical. But, given that state money accounts for a relatively small portion of broad money, broad money in many countries has been growing relatively slowly. So, overall monetary conditions have been relatively tight and modestly procyclical. In consequence, real GDP growth and inflation, which constitute nominal GDP growth, have come in below their trend rates.

The accompanying table shows the changes in state money, bank money, and broad money for the ten largest economic regions in the world. The U.S., Japan, the Eurozone, the U.K., and Korea lead the field in terms of QE. All have ramped up their production of state money. This can be observed by noting that the proportion of state money to broad money jumps up from September 2008 to January 2016 in these countries. For China, Canada, Brazil, India, and Russia, the picture is different. The share of state money to broad money declined, indicating that they did not engage in QE. When we look at bank money, the situation in the U.S., Japan, and the U.K. has been stunning. For these countries, the amount of bank money in the economy was lower in January 2016 than in September 2008. Talk about tight bank money policies. It’s not surprising that the U.S., Japan, and the U.K. embraced QE early in the game. If they had not done so, the growth in broad money would have been much more anemic than it was, and deep recessions would have ensued.

The Eurozone arrived at the QE party a bit late. But, it arrived nevertheless. Now, European Central Bank (ECB) President Mario Draghi and QE face a wave of criticism. Many in Germany, for example, oppose QE. Many even argue that the ECB (and other central banks) are out of ammunition. This is nonsense.

Let's take a look at one QE operation that would directly boost the money supply without increasing the government's net debt. The process begins with the government borrowing from commercial banks. Short-dated government paper is transferred to banks. In exchange, the deposit balance of the government is credited.

This new government deposit is not counted as a part of the money supply. The government then uses its bank deposits (which are not considered money) to purchase long-dated government bonds from the non-bank private sector. These transactions add to the non-bank private sector's bank deposits and directly to the money supply, because bank deposits in the name of private persons and entities are money. So, the quantity of money is directly increased by this debt market operation, and an equivalent amount of long-dated government debt is reduced — literally eliminated.

Of course, the amount of short-dated government debt increases when the government initially borrows from the commercial banks. Accordingly, these debt market operations leave the government’s total net debt unchanged, but it does change the composition of the government’s debt, leaving it with a shorter average duration.

So, forget claims that central banks are out of ammunition. Again, the reason that most come to that incorrect conclusion is that they focus on interest rates.

Moving from the broad picture to the U.S., we see in the accompanying table that there have been three QEs. Their impact on state, bank, and broad money is shown in the table. Each QE was associated with a significant increase in state money, which offset, to some degree, the negative “contributions” of bank money to the total supply of broad money.

The accompanying chart traces out the monetary liabilities of the Fed and profiles the course of state money since the Lehman Brothers bankruptcy. By the summer of 2014, QE 3 had run its course, and the level of state money has remained stable. 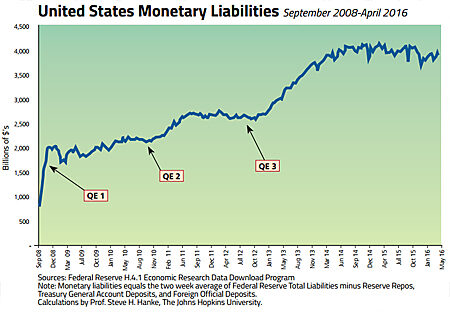 The last chart depicts the huge expansion of state money. That's shown by the widening of the green area since the Lehman Brothers collapse. Although expansive, the QE has hardly been enough to offset the tightness in bank money. In consequence, broad money has only been growing at a 1.72 percent annual growth rate since October 2008. So, it's not surprising that nominal GDP has grown relatively slowly and that we have not witnessed the inflation surge predicted by many who were only watching the Fed's balance sheet balloon. 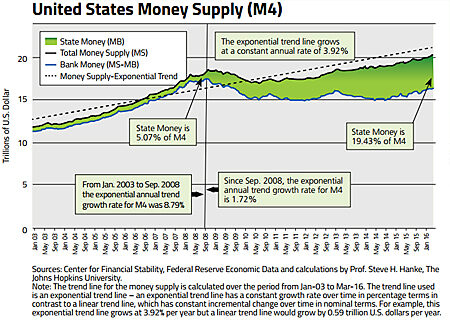 To say that money and monetary policies are misunderstood is an understatement. What's worrying is that the political class does not have the faintest understanding of the importance of bank money. Their populist bank-bashing rhetoric and regulations are putting a drag on the growth of bank money and economic activity.