We are still in the grip of the Great Recession. Economic growth remains anemic and below its trend rate in most parts of the world. And what’s more, this state of subdued economic activity has been with us for over seven years​.In the U.S. (and elsewhere) the central bank created a classic aggregate demand bubble that became visible in 2004. The Fed’s actions also facilitated the creation of many market‐​specific bubbles in the housing, equity, and commodity markets. These bubbles all dramatically burst, with the bankruptcy of Lehman Brothers in September 2008.

What was most remarkable was the fantastic change in the inflation picture. In the U.S., for example, the year‐​over‐​year consumer price index (CPI) was increasing at an alarming 5.6% rate in July 2008. By February 2009, that rate had dropped into negative territory, and by July 2009, the CPI was contracting at a -2.1% rate. This blew a hole in a well‐​learned dogma: that changes in inflation follow changes in policy, with long and variable lags. Since the world adopted a flexible exchange‐​rate “non‐​system”, changes in inflation can strike like a lightning bolt.

The monetary approach offers a coherent theory of national income determination – one that stands up to the test of empirical verification.

True to form, central bankers have steadfastly denied any culpability for creating the bubbles that so spectacularly burst during the Panic of 2008-09. What’s more, they have repeatedly told us that they have saved us from a Great Depression. For central bankers, the “name of the game” is to blame someone else for the world’s economic and financial troubles.

To understand why the Fed’s fantastic claims and denials are rarely subjected to the indignity of empirical verification, we have to look no further than Milton Friedman. In a 1975 book of essays in honor of Friedman, Capitalism and Freedom: Problems and Prospects, Gordon Tullock wrote:

Friedman’s assertion has subsequently been supported by Larry White’s research. He found that, in 2002, 74% of the articles on monetary policy published by U.S. economists in U.S.-edited journals appeared in Fed-sponsored publications, or were authored (or co-authored) by Fed staff economists.

The explanations of the Great Recession have been all over the map and surprisingly incoherent. For example, Andrew Lo reviewed twenty-one books on the topic in the January 2012 issue of the Journal of Economic Literature. He found that the mainstream, post-crisis approach amounts to an ad hoc approach that lacks a unifying theory or theme. That said, the literature — from Alan Greenspan’s 2013 book The Map and The Territory to the 2009 tome Animal Spirits by George Akerlof and Robert Shiller — is punctuated with a great deal of conjecture about changes in investors’ animal spirits and how these wrecked havoc on the financial markets and the economy during the Panic of 2008-09 and the ensuing Great Recession. Much of this is borrowed from a recent fashion in economics: behavioral finance.

But, this line of argument goes back to earlier theories of the business cycle; theories that stress the importance of changes in business sentiment. For example, members of the Cambridge School of Economics, which was founded by Alfred Marshall, all concluded that fluctuations in business confidence are the essence of the business cycle. John Maynard Keynes put great stress on changes in confidence and how they affected consumption and investment patterns. Frederick Lavington, a Fellow of Emmanuel College and the most orthodox of the Cambridge economists, went even further in his 1922 book, The Trade Cycle. Lavington concluded that, without a “tendency for confidence to pass into errors of optimism or pessimism,” there would not be a business cycle.

So, the mainstream approach fails to offer much of a theory of national income determination. The monetary approach fills this void. Tim Congdon — a master of the high theory of monetary economics and all the knotty practical details of money and banking, too — has supplied us with a most satisfying and comprehensive treatment of the causes of business cycles and the current Great Recession. Three of Congdon’s most important books are listed in the references below.

The monetary approach posits that changes in the money supply, broadly determined, cause changes in nominal national income and the price level (as well as relative prices — like asset prices). Sure enough, the growth of broad money and nominal GDP are closely linked. Indeed, the data in the following chart speak loudly. 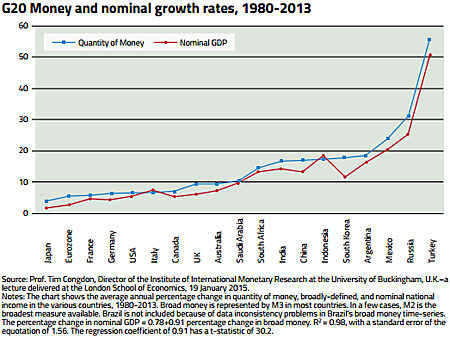 By observing the plunge in broad money, the contraction in the U.S. economy was, therefore, inevitable and in line with the monetary approach to national income determination (see the accompanying chart). But why has post-crisis growth remained so low? Well, because the growth in broad money has remained well below its trend rate. Indeed, Divisia M4 is only growing at a 2.7% year-over-year rate. Why? Since the crisis, the policies affecting bank regulation and supervision have been massively restrictive. By failing to appreciate the monetary consequences of tighter, pro-cyclical bank regulations, the political chattering classes and their advisers have blindly declared war on bank balance sheets. In consequence, bank money, which accounts for between 70% to 90% of broad money in most countries, has contracted or failed to grow very much since the crisis. Since bank money is an elephant in the room, even central bank quantitative easing has been unable to fully offset the tightness that has enveloped banks. Looking at the U.S., there is a ray of hope, however: credit to the private sector has finally started to grow above its trend rate. 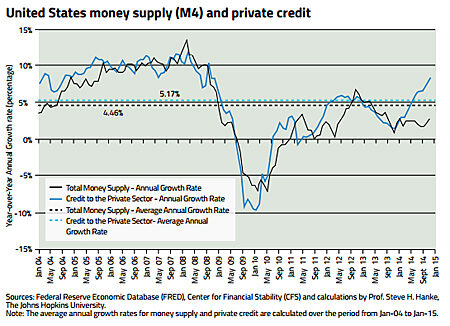 The money and credit picture in the Eurozone has been much more dire than in the U.S. In fact, this has resulted because, until recently, the European Central Bank has refused to offset, with quantitative easing, the regulatory-induced tight monetary policies imposed on banks. That is now changing and credit to the private sector is about ready to become positive for the first time since 2012 (see the accompanying chart). 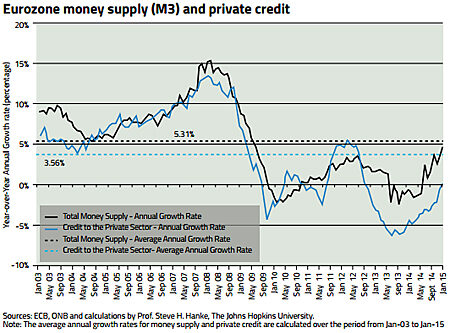 China, the last of the Big Three, has a monetary problem (as well as others). Broad money has been growing at below its trend rate since 2012, and it's becoming weaker with each passing month (see the accompanying chart). In an attempt to pump up the growth rate in broad money, China's central bank has cut interest rates twice since last November and lowered reserve requirements for banks. But so far, it has proven to be too little, too late. Not surprisingly, official forecasts for China's 2015 GDP growth have been dialed back. 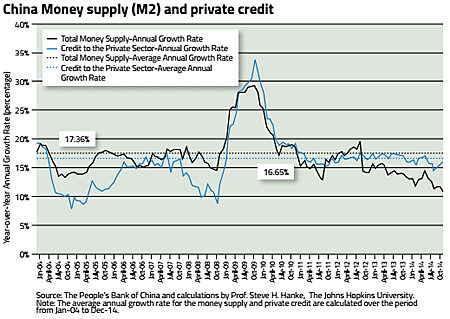