Senator Edward Kennedy once called the minimum wage “one of the best antipoverty programs we have.” Jared Bernstein, former chief economist to Vice President Joe Biden, thinks “it raises the pay of low‐​wage workers without hurting their job prospects.” And Ralph Nader thinks low‐​wage workers deserve a pay increase — and the government should provide it.

Why do those beliefs persist in the face of common economic sense? No legislator has ever overturned the law of demand, which says that when the price of labor rises, the quantity demanded will fall (assuming other things are constant). That same law tells us that quantity demanded (i.e., the number of jobs for low‐​skilled workers) will decrease more in the long run than in the short run, as employers switch to labor‐​saving methods of production — and unemployment will increase.

The belief that increasing the minimum wage is socially beneficial is a delusion.

The belief that increasing the minimum wage is socially beneficial is a delusion. It is short-sighted and ignores evident reality. Workers who retain their jobs are made better off but only at the expense of unskilled, mostly young, workers who either lose their jobs or can’t find a job at the legal minimum.

A higher minimum wage attracts new entrants but does not guarantee them a job. What happens on the demand side of the market is not surprising: if the minimum wage exceeds the prevailing market wage (determined by supply and demand), some workers will lose their jobs or have their hours cut. There is abundant evidence that a 10 percent increase in the minimum wage leads to a 1 to 3 percent decrease in employment of low-skilled workers (using teens as a proxy) in the short run, and to a larger decrease in the long run, along with rising unemployment. 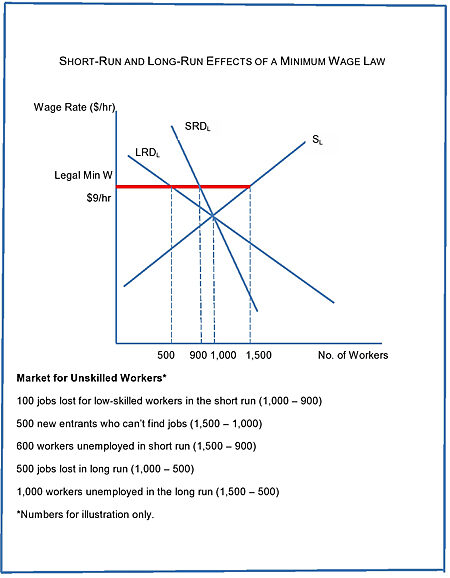 Employers have more flexibility in the long run and will find ways to economize on the higher-priced labor. New technology will be introduced along with labor-saving capital investment, and skilled workers will tend to replace unskilled workers. Those substitutions will occur even before an increase in the minimum wage, if employers believe such an increase is imminent. There will be fewer jobs for low-skilled workers and higher unemployment rates—especially for minorities—and participation rates will fall as workers affected by the minimum wage drop out of the formal labor market.

The minimum wage violates the principle of freedom by limiting the range of choices open to workers, preventing them from accepting jobs at less than the legal minimum. It also prohibits employers from hiring those workers, even if both parties would be better off. Thus, contrary to the claims of minimum-wage proponents, the government does not increase opportunities for low-skilled workers by increasing the minimum wage. If a worker loses her job or can’t find one, her income is zero. Employers will not pay a worker $9 per hour if that worker cannot produce at least that amount.

Politicians promise low-skilled workers a higher wage, but that promise cannot be kept if employers cannot profit from retaining those workers or hiring similar workers. Jobs will be lost, not created; and unemployment will rise as more workers search for jobs but can’t find any at the above-market wage.

Most employers cannot simply raise prices to cover the higher minimum wage, particularly in the competitive services sector. And if they do increase prices, consumers will buy less or have less money to spend on other things, meaning fewer jobs on net. Moreover, if the minimum wage cuts into profits, there will be less capital investment and job growth will slow.

A recent study by Jonathan Meer and Jeremy West, economists at Texas A&M University, found that “the most prominent employment effect of minimum wage laws is a decline in the hiring of new employees.” That effect takes place over time as employers shift to labor-saving methods of production. Since the minimum wage has the largest impact on the least-skilled workers who have few alternatives, their lifetime earnings will be adversely affected by delaying entry into the work force and losing valuable job experience.

Proponents of the minimum wage such as John Schmitt, a senior fellow at the Center for Economic and Policy Research in Washington, like to argue that the mean effect of the minimum wage on jobs for low-skilled workers is close to zero. But a preponderance of evidence has shown that there are no positive effects on employment of low-skilled workers that offset the negative effects from an increase in the minimum wage. The trick is to control for other factors (“confounding variables”) affecting the demand for labor and to make sure the data and research design are valid. The focus should be on those workers adversely affected by the minimum wage—namely, younger individuals with little education and few skills.

In a recent case study that controls for confounding factors that make it difficult to isolate the impact of an increase in the minimum wage on employment for low-skilled workers, Joseph Sabia, Richard Burkhauser, and Benjamin Hansen find that when New York State increased the minimum wage from $5.15 to $6.75 per hour, in 2004–06, there was a “20.2 to 21.8 percent reduction in the employment of younger less-educated individuals.”

Advocates of the minimum wage like to point to the “natural experiment” that David Card and Alan Krueger conducted to see whether a minimum wage hike in New Jersey adversely affected employment in the fast-food industry compared to Pennsylvania, which did not increase its minimum wage. Based on telephone surveys, the authors concluded that the minimum wage hike significantly increased jobs for low-skilled, fast-food workers in New Jersey. Not surprisingly, their results were overturned by more careful research that found an adverse effect on employment (see David Neumark and William Wascher, American Economic Review, 2000).

It should be obvious that limiting one’s study to franchise restaurants like McDonald’s ignores smaller independents that are harmed by increases in the minimum wage and can’t compete with their larger rivals. No one interviewed those workers who lost their jobs or could not find a job at the higher minimum wage. Proponents of the minimum wage focus on workers who retain their jobs and get a higher wage, but ignore those who lose their jobs and get a lower wage or none at all. Using econometrics to pretend that the law of demand is dead is a dangerous delusion.

If one gets empirical results that go against the grain of long-held economic laws, one should be very wary of advocating policies based on those results. One should also not stop with the short-run effects of the minimum wage but trace out the longer-run effects on the number of jobs and unemployment rates for affected workers.

Today black teen unemployment is more than 40 percent; nearly double that for white teens. In 2007, prior to the Great Recession, the black teen unemployment rate was about 29 percent. There is no doubt the increase in the federal minimum wage from $5.15 to $7.25 per hour contributed to the higher unemployment rate. If Congress passes a new minimum wage law that makes it illegal for employers to pay less than $9 per hour, and for workers to accept less than that amount, we can expect further erosion of the market for unskilled workers, especially black teens.

With so many young, unskilled workers looking for work, employers can pick and choose. They can cut benefits and hours; and they can substitute more-skilled workers for less-skilled workers. Recent studies based on data for contiguous counties across state borders have ignored labor-labor substitution and wrongly concluded that higher minimum wages do not adversely affect employment.

Arindrajit Dube, T. William Lester, and Michael Reich, for example, use county-level data over a 16.5 year period to examine the impact of local differences in minimum wages on employment in restaurants, which primarily hire low-skilled workers. Based on their analysis and assumptions, they “find no adverse employment effects.”

Proponents of a higher minimum wage have rested their case on Dube et al. and related studies—such as Sylvia Allegretto, Dube, and Reich, who conclude that “minimum wage increases—in the range that have been implemented in the United States—do not reduce employment among teens.”  Neumark, Salas, and Wascher, in a (www.nber.org/papers/w18681, January 2013) , argue that “neither the conclusions of these studies nor the methods they use are supported by the data.” Indeed, Dube et al. admit that their data prevent them from testing “whether restaurants respond to minimum wage increases by hiring more skilled workers and fewer less-skilled ones.”

Existing evidence supports labor-labor substitution in response to a higher minimum wage—especially over the longer run. Employers have a strong incentive to retain better-educated teens and train them, and to hire skilled workers to operate labor-saving equipment. Contrary to the claims of Bernstein and others who support the minimum wage, a higher minimum (other things constant) will decrease employment opportunities for the least-skilled workers. Workers who retain their jobs will be higher productivity workers—not low-wage workers in low- income families. Minimum wage laws harm the very workers they are intended to help.

Small businesses are already laying off low-skilled workers and investing in self-service tablets, robotics, and other labor-saving devices in anticipation of a higher minimum wage; and hours are being cut. Those trends will continue, especially if the minimum wage is indexed for inflation.

Advocates of higher minimum wages confuse cause and effect. They think a higher minimum wage causes incomes to go up for low-skilled workers and doesn’t destroy jobs. Workers are assumed to have higher wages and retain their jobs as a result of government policy—even though they have done nothing to improve their job skills. But if a worker is producing $5.15 per hour and now the employer must pay $9 per hour, there will be little incentive to retain her. There will also be little incentive to hire new workers. Without an increase in the demand for labor—that is, an increase in labor productivity due to better technology, more capital per worker, or additional education—a higher minimum wage will simply price some workers (the least productive) out of the market, and their incomes will be zero.

The minimum wage is not a panacea for poverty. Indeed, Neumark, Schweitzer, and Wascher examine the evidence and conclude that “the net effect of higher minimum wages is ... to increase the proportion of families that are poor and near-poor” (Journal of Human Resources, 2005). Thus, the minimum wage tends to increase, not decrease, the poverty rate.

The best antipoverty program is not the minimum wage but economic freedom that expands workers’ choices and allows entrepreneurs to freely hire labor without the government dictating the terms of the exchange, except to prevent fraud and violence. When entrepreneurs adopt new technology and make capital investments autonomously—that is, without being induced to do so because of government mandated increases in wage rates—there is a boost in worker productivity, jobs, and incomes. But when the government increases the minimum wage above the prevailing market wage for low-skilled workers, firms will have an incentive to substitute labor-saving production techniques that destroy jobs for low-productivity workers, especially minorities, and prevent workers from moving up the income ladder.

Ignoring the law of demand to adopt a higher minimum wage in the hope of helping low-wage workers is a grand delusion. The persistence of this false belief ignores economic reality. It is a red herring that diverts attention from alternative policies that would increase economic freedom and prosperity for all workers.