On July 1st, Andrés Manuel López Obrador (AMLO) won Mexico’s presidential election in a landslide. He pulled in a whopping 53% of the vote. This left the candidate from the governing Institutional Revolutionary Party (PRI), José Antonio Meade, in the dust, with a third place finish and only 16% of the vote. Ricardo Anaya from the conservative National Action Party (PAN) didn’t do much better. His second‐​place finish only carried 22% of the vote.

AMLO, a leftist, ran a skilled campaign in which he hit the hot button issues with elevated rhetoric: Mexico’s crime and corruption. AMLO convinced the voters that crime and corruption had entered a doom loop, thanks to the established political parties. He also pledged to respect the independence of the Bank of Mexico, while at the same time promising more government spending.

What does this sea-change in the political landscape mean for Mexico? Let’s begin by taking a look at the performance of the Bank of Mexico. The last Forbes column in which I did that was way back on July 4, 1994. It was then that the late Sir Alan Walters and I penned “The Wobbly Peso.” In that piece, we predicted that the peso’s peg would come undone and the peso would collapse. Well, it did in December 1994. Remember the “Tequila Crisis”?

For me, a monetary approach to national income determination is what counts. The link between the growth rate of the money supply and nominal GDP is unambiguous and overwhelming.

As Milton Friedman put it in his 1987 New Palgrave Dictionary of Economics entry, “Quantity Theory of Money” (QTM), “The conclusion (of the QTM) is that substantial changes in prices or nominal income are almost always the result of changes in the nominal supply of money.” The income form of the QTM states: MV=Py, where M is the money supply, V is the velocity of money, P is the price level, and y is real GDP (national income).

Let’s use the QTM to make some bench calculations to determine what the “golden growth” rates are for the money supply. These are the rates of broad money growth that would allow the Bank of Mexico to hit its inflation target.

According to my calculations, the average percent real GDP growth since 2003 was 2.34%, the average growth in Total Money Supply (M3) was 9.71%, and the average change in the velocity of money was -1.92%. Using these values and the Bank of Mexico’s inflation target of 3%, I calculated Mexico’s “golden growth” rate for Total Money to be 7.26%. 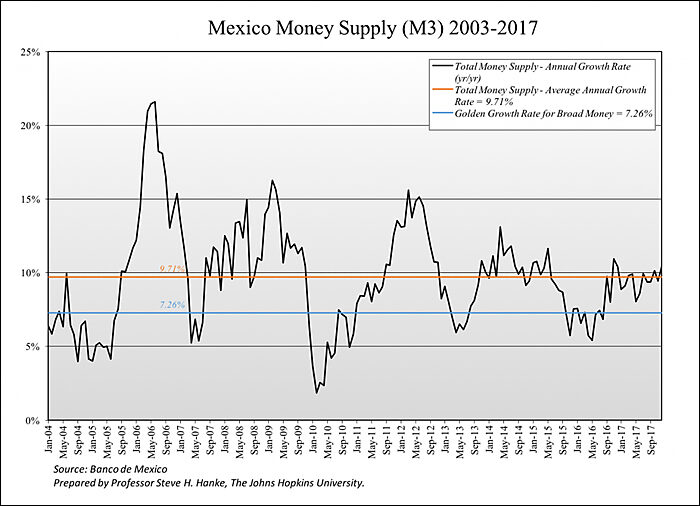 The Bank of Mexico has, on average, overshot the golden growth rate by 2.45%. Not surprisingly, the average rate of inflation at 4% has been a full percentage point over the Bank’s target of 3%. So, there are good reasons for AMLO to keep his hands off the Bank of Mexico. While it has not turned in a great performance, it has turned in a respectable one.

As for AMLO’s fiscal promises, they are expensive. He wants to subsidize agriculture, expand pensions, and provide university scholarships, among other promises of largesque. If AMLO follows through on these promises, Mexico will certainty experience larger fiscal deficits. And, the Bank of Mexico will experience a big headache. As for the peso, it might wobble. So, with AMLO, Mexico will probably move into a more unstable macroeconomic zone.

When we move to corruption, we find a lot of it in Mexico. The Corruption Perceptions Index(CPI) is a metric that gives us a handle on the level of corruption. A score of “0” indicates that a country is perceived to be totally corrupt, while a score of “100” indicates total “cleanliness” (read: no perception of corruption).

Of the 180 countries rated by the CPI, Mexico is tied at the 135th place with the Dominican Republic, Honduras, Kyrgyzstan, Papua New Guinea, Paraguay, and Russia. All these countries had a dismal score of 29, indicating that they are perceived to be very corrupt. If that isn’t bad enough, since 2013, Mexico’s CPI has been deteriorating, indicating that corruption is getting worse. AMLO is clearly onto something big — something that helped him win the election.

While AMLO’s rhetoric about fighting corruption might be right on target, the reality appears to be much different. To fight corruption, he will have to shrink the government and deregulate the economy. But, he has promised to do just the opposite.

Crime is another hot button issue in which AMLO conquered the rhetorical commanding heights. To appreciate just how bad crime is in Mexico, just look at the Fraser Institute’s Economic Freedom of the World 2017 Annual Report. One of the five categories in which 159 countries are rated is the “Legal System and Property Rights” category. It contains nine elements, including the “Reliability of Police” and “Business Costs of Crime.” Mexico is ranked 117 out of 159 countries in this category. This indicates a very high level of crime. And, its frequency is growing with each passing day.

Again, AMLO scores well with his anti-crime rhetoric, but the reality is that he has no plan of attack. Indeed, one wonders whether he knows what the word “plan” means.

We will have to wait until AMLO is installed as Mexico’s next president in December to receive a clearer picture of his agenda. At this point, it looks like there will be a huge gap between AMLO’s rhetoric and Mexico’s reality. Indeed, I expect more instability, more corruption, and more crime.

Brazil’s Bolsonaro Is No Friend of Liberty

In Bernie Sanders vs. Amazon’s Jeff Bezos, Only Workers Lose