Earlier this week, China and India said they had resolved their differences over the sovereignty of the Kingdom of Bhutan. Both claimed victory over their two‐​month‐​long dispute in the remote Himalayan Kingdom. But, statements by both sides created confusion and doubts over how long stability would prevail. And, Bhutan is not the only piece of real estate in the Himalayas that India is in a flap over. Kashmir remains a tinderbox. And just this week, Prime Minister Benjamin Netanyahu proclaimed that Israel would not force any more of its so‐​called settlers to move from the occupied territories of the West Bank.

There are many other disputed and potentially dangerous territories. Don’t forget the Falklands. It has recently flared up in an ongoing spat between the United Kingdom and Argentina. Indeed, both Prime Minister Theresa May and the Chancellor of the Exchequer Philip Hammond began dueling it out over the Falklands with Buenos Aires earlier this month.

This brings back memories of the Iron Lady and the Falklands War — a war that officially commenced on 2 April 1982, only three short years after Margaret Thatcher assumed the reins as Prime Minister of the United Kingdom. Since 1833, Britain has been able to maintain its colonial settlement of the Falklands against the objections of Argentina. The Falklands? Well, even Samuel Johnson had something to say about the Falklands. This is what he wrote in 1771:

The Thatcher government did not realize that danger was lurking, as is always the case when disputed territories are in the picture. Indeed, Britain’s intelligence about what Argentina’s military government was up to was wanting. When the Galtieri government struck, Britain was caught off guard and the Falklands War ensued, resulting in more than 900 casualties. And, as they say, what goes around comes around. As the preparations for next year’s G2O summit, which will be hosted in Buenos Aires, proceed, tensions are on the rise, yet again.

Before we have more nationalistic posturing, sanctions, protracted skirmishes, a new war, and only then a “solution,” let’s move the Falklands dispute out of what is mucha teología (many theological arguments) territory, try to think creatively and design market-based treaties applicable to dangerous disputed territories (see the accompanying table). 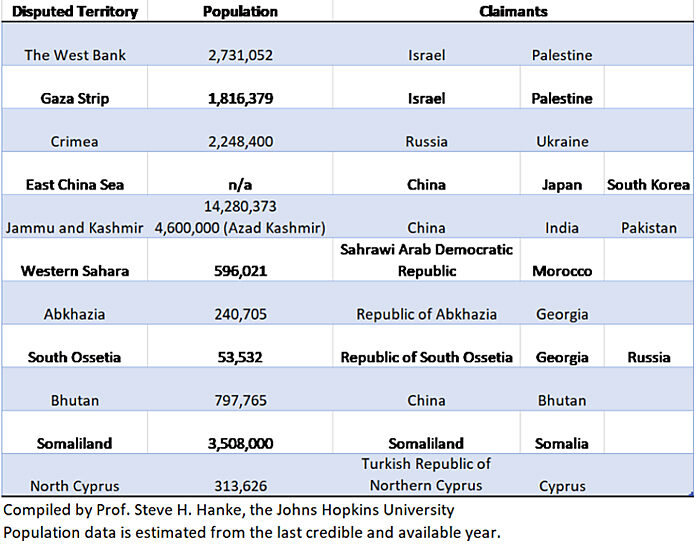 For the Falklands, the governments of the United Kingdom and Argentina would agree that those Falklanders who were qualified to vote would be allowed to do so in a referendum. The referendum would allow the settlers — who are English-speaking and English by custom, institutions and loyalties — to vote on whether they prefer the status quo, or whether they would agree (“yes”) to an Argentine take-over. A super-majority “yes” vote, of say 80%, would be required by the Falklanders to allow Argentina to claim sovereignty.

This is where markets come in. The Falklanders would have to be compensated by Argentina. The referendum would be designed so that Argentina could offer a cash incentive. Before the referendum, Argentina would deposit an amount (let’s say USD $500,000) in escrow, in Swiss bank accounts for every man, woman and child who had proven their Falklands residence prior to the referendum. If the referendum went in Argentina’s favor (over 80% of eligible voters casting a “yes” vote), then the funds in escrow would be transferred to the Falklanders, and Argentina’s unambiguous sovereignty over the Falklands would be established. Argentina’s cost, in this hypothetical, would be about USD $1.6 billion.

A transparent market solution for the Falklands and other disputed territories would be a cost-effective way to unambiguously establish sovereignty — a way that avoids blundering into unwanted wars and spilling blood, sweat and tears.