As President Trump’s trade policy careens along, it’s clear that a key goal is prodding U.S.-based firms to shift foreign production to the United States. The revised NAFTA agreement’s mandate that a certain percentage of auto parts be produced by workers earning at least $16 per hour, for example, is clearly designed to shift such work away from Mexico. The president has also sent tweets encouraging Ford and Apple to escape the impact of tariffs on China by making their products domestically. 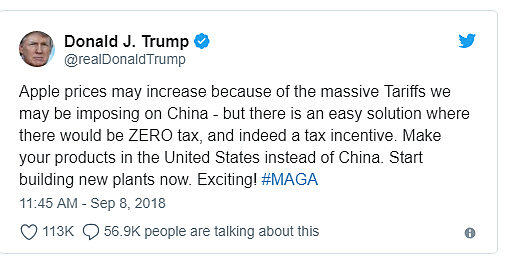 Using tariffs to shift work back to the United States, however, would be penny wise and pound foolish.

If Apple assembles its iPhones in China or an automaker uses workers in Mexico to produce parts or finished cars, they do so for a very good reason: It's the most cost-effective option. Using tariffs and other measures to drive production to the United States does little more than artificially raise expenses. It's the equivalent of the government requiring holes to be dug with spoons instead of excavators.

Let's imagine what would happen if, due to rising tariffs, Apple decided to end the production of iPhones in China and move production in the United States. True enough, jobs would be created, but at substantial cost. Before a single iPhone could be made, billions would have to be devoted to building new factories. Further billions would have to be spent attracting workers in a low-unemployment economy with much higher wages than those found in China. Time would be needed to train these workers as well as develop the associated ecosystem of suppliers.

So how would these expenses be paid for? Likely in a variety of ways. One option might be to raise prices. Indeed, some analysts estimate the likely retail price of a U.S.-built iPhone to be at least double that of one made in China. But that means reduced sales and higher barriers for consumers to acquire one of the great conveniences of modern life. Fewer purchases of iPhones would also filter through the rest of the economy, harming other firms such as those that design apps or others who use them to deliver services.

Another option would be for Apple to reduce its expenditures on areas such as research and development or marketing. In addition to placing the company at a competitive disadvantage and reducing the quality of its offerings — another harm to consumers — such a move would likely translate into fewer high-paying jobs at Apple's U.S. headquarters. Indeed, for all of the talk about iPhone assembly jobs overseas, often forgotten is that the company has more than 35,000 employees in California alone.

Using tariffs and other measures to drive production to the United States does little more than artificially raise expenses.

A third way to foot the bill, meanwhile, would be to absorb the loss and accept lower profits. But this also has a negative impact on the broader economy. Lower profits mean reduced dividends — money that can no longer be spent or reinvested elsewhere — and making the company’s stock less attractive. Such downward pressure on Apple’s stock price hurts investors in the company, including those who hold shares as part of their retirement planning.

Examined more closely, then, the costs of using trade barriers to encourage domestic production become apparent and the trade‐​offs less appealing. Trump’s tariffs could indeed induce more production to take place domestically, but would also result in a variety of costs including less innovation, increased prices, and fewer jobs elsewhere. And all of this presumes that shifting an entire supply chain away from China is even within the realm of possibility — something senior Apple officials have previously stressed is not.

The failure of such policies is far from theoretical. Argentina’s use of import duties to create a manufacturing hub for electronics in remote Patagonia, for example, has been widely noted for its futility. In contrast, open economies such as Hong Kong and Singapore, or any number of other developed countries, are renowned for their prosperity.

If the Trump administration seeks to encourage more investment in the U.S. economy and bolster its attractiveness as a destination for capital, there are better ways of going about it. Instead of aggressively wielding his tariff stick President Trump should offer some carrots. Tariff increases should be replaced with tariff cuts. Among the salutary effects of such a move would be improved access to intermediate goods and lowered cost of production for U.S. manufacturers.

Other realizations are also in order. Some jobs simply are not returning to U.S. shores. Nor, given the prohibitive cost of repatriating them and their associated supply chains, should we want them to. President Trump can’t bring back these jobs, but he is certainly going to cause a lot of hurt if he keeps trying.

Zuckerberg Was Right About How to Handle Holocaust Deniers

Patreon Is Not Waging War on Free Speech