Ever since the U.S. Federal Reserve began raising the federal funds rate, the market has been obsessed with speculation about when and how much the Fed will raise that rate. Each time a consensus congeals around the answer to that question, all the world’s markets either soar or dive.

This obsession with the interest rate story is simple, but strange. Indeed, it is misguided — wrongheaded. So, why the fixation? It is, in part, the result of a Keynesian hangover, due to the Keynesians’ focus on interest rates. The mainstream macroeconomic model that is widely in use today is referred to as the “New Keynesian” model. The thrust of monetary policy contained in this model is entirely captured by changes in current and expected interest rates (the price of money). Money — that is the quantity of money — is nowhere to be found, however.

Ever since the U.S. Federal Reserve began raising the federal funds rate, the market has been obsessed with speculation about when and how much the Fed will raise that rate.

This misguided focus on interest rates not only poses a problem for those who are observing the current economic environment and formulating expectations, but also for those who are interpreting important economic and market events of the past. For example, Nobelist and Keynesian Robert Shiller, in his famous book, Irrational Exuberance, comes to the conclusion that the stock market crash in 1929 was caused by the Fed’s excessively restrictive monetary policy. That’s because Shiller focuses on interest rates and thinks that the Fed’s increase in the discount rate in August 1929 signaled monetary tightening. But, as Elmus Wicker carefully documents in Wall Street, the Federal Reserve and Stock Market Speculation: A Retrospective, the Fed was accommodative, not restrictive, prior to the 1929 stock market crash.

The interest rate obsession is amazing, particularly since Keynes dedicates quite a few pages in A Tract on Monetary Reform (1923) to money and its role in national income determination. Then, in his two-volume 1930 work, A Treatise on Money, Keynes devotes a great deal of space to banks and their important role in creating money. In particular, Keynes separates money into two classes: state money and bank money. State money is produced by central banks, while bank money is produced by commercial banks through deposit creation.

We should keep our eyes on money broadly measured (state, plus bank money), and money properly measured (when available, Divisia, not simple sum measures). A monetary approach to national income determination is what counts over the medium term. The link between the growth rate of the money supply and both nominal GDP and nominal aggregate demand growth is unambiguous and overwhelming. Never mind. There remain plenty of deniers of basic principles and centuries of clear evidence.

So, just where do things stand today in the U.S.? The growth rate in money measured (Divisia M4) is almost exactly equal to its trend rate of 4.8%, as shown in the chart below. Not bad. 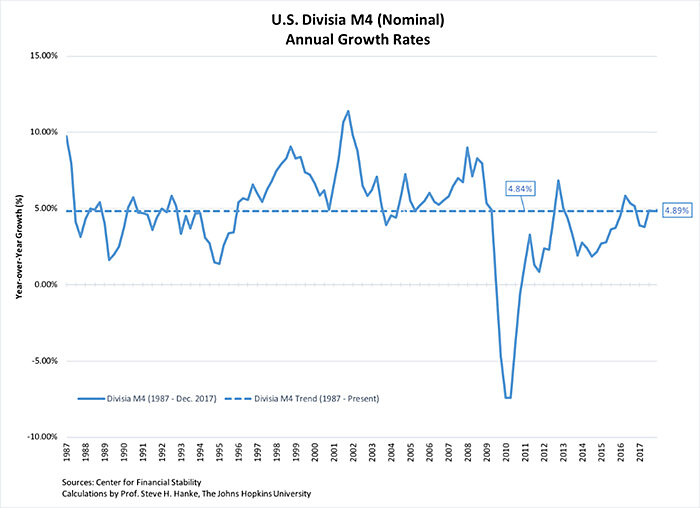 If we move to the rate of growth for the economy’s nominal aggregate demand (measured by Final Sales to Domestic Purchasers, which equals GDP + Imports – Exports – Change in Inventory), it is just a tad over the trend rate of growth of 4.7% (see the chart below). Again, not bad. 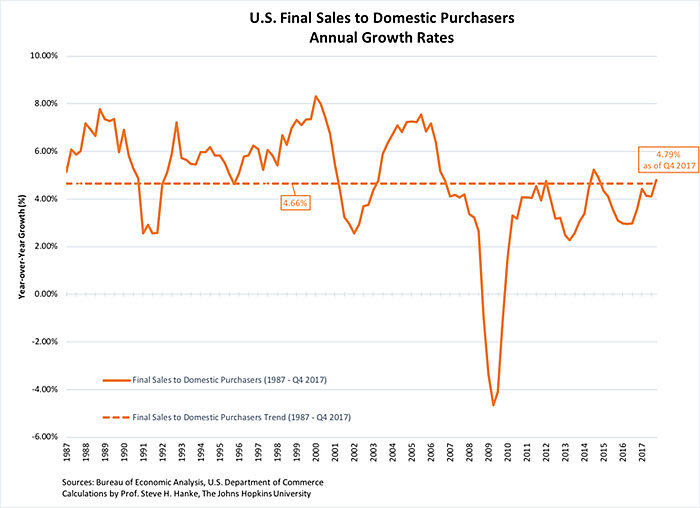 So, everything is running pretty smoothly -- right on the trend rates. What could go wrong? The biggest risk is that the Fed could slam on the breaks too hard, and broad money growth would decelerate. That would cause aggregate demand to slow, and everything that is so nicely balanced would, well, not be so nicely balanced. If you want to follow this saga, stop obsessing over the Fed funds rate moves, and keep your eyes on the best measure for the growth of broad money, Divisia M4.