Well, it’s official, the economic talking head establishment has declared war on Germany. The opening shots in this battle were fired by none other than the US Treasury Department, which had the audacity to blame Germany for a weak Eurozone recovery in its semi‐​annual foreign exchange report.

Despite Germany’s relatively strong recovery, the international economic establishment is none too happy about the country’s tight fiscal ship.

The Treasury’s criticisms were echoed by IMF’s first deputy managing director David Lipton, in a recent speech in Berlin — a speech so incendiary that the IMF opted to post the “original draft” rather than his actual comments, on its website. Things were kicked into a full blitzkrieg when Paul Krugman penned his latest German-bashing New York Times column.

The claims being levelled against Germany revolve around nebulous terms like “imbalances” and “deflationary biases.” But, what’s really going on here?

The primary complaint being levelled is that Germany’s exports are too strong, and domestic consumption is too weak. In short, the country is producing more than it consumes. Critics argue that “excess” German exports are making it harder for other countries (including the US) to recover in the aftermath of the financial crisis.

While a review of international trade statistics is all well and good, the ire against Germany actually comes down to one thing: austerity. Despite Germany's relatively strong recovery, the international economic establishment is none too happy about the country's tight fiscal ship.

If only Germany would crank up government spending, then Germans would buy more goods, and all would be right in the Eurozone, and around the world — the argument goes. 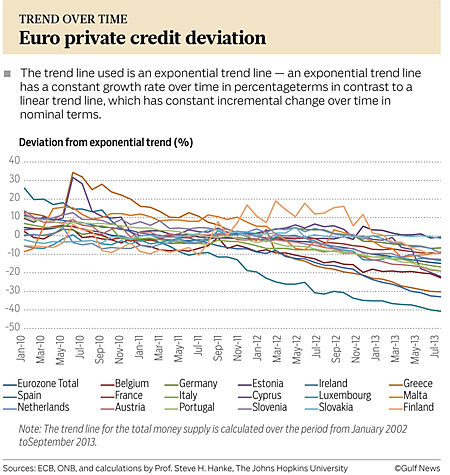 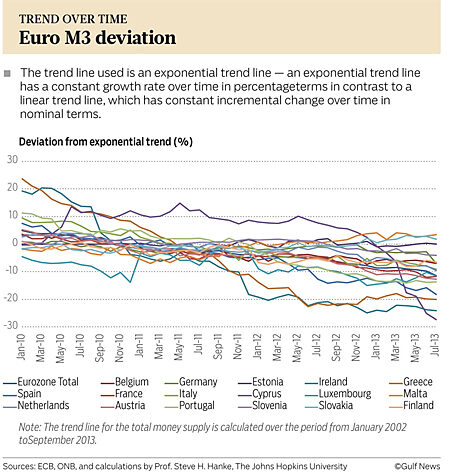 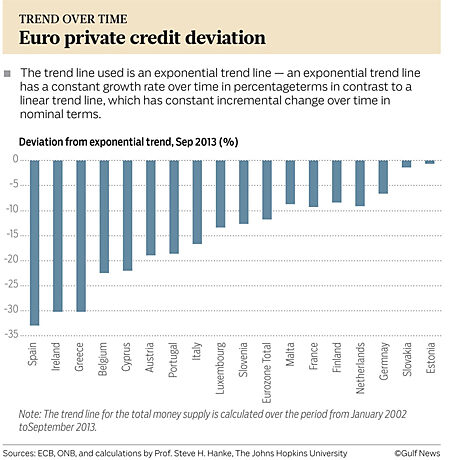 Unfortunately, this is nothing more than a factoid, defined by the Oxford English Dictionary as “an item of unreliable information that is reported and repeated so often that it becomes accepted as fact”. Well, the fiscalists have been repeating this line as fact, despite strong evidence to the contrary.

Never mind the lackluster results of fiscal stimulus efforts in the US and Southern Europe in the early years of the Great Recession; and never mind the relatively robust German recovery, “despite” its austere fiscal policies. Surely, the Keynesians tell themselves, if they say it (repeatedly), it must be true. 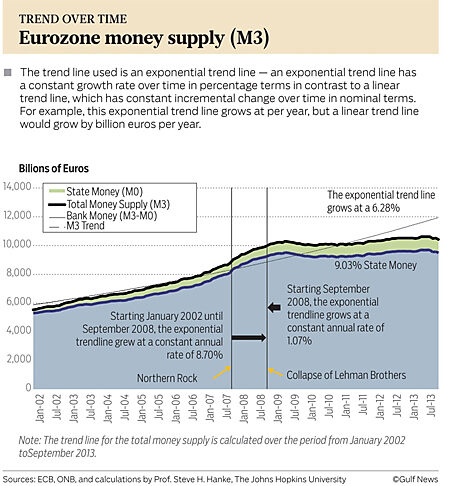 Now, having failed to find evidence at a national level supporting the fiscal factoid, the establishment has turned to an international explanation for the failure of standard Keynesian fiscalism, and set their sights on their new German scapegoat.

Rather than diving into the weeds of this rather convoluted argument, we ought to focus on what really matters — money. Yes, when we look at the Eurozone’s money supply, more specifically the portion created by the private banking sector, the German austerity scapegoat begins to look more like a red herring.

To do this, we revert back to John Maynard Keynes at his best. Specifically, we must look at his two-volume 1930 work, ‘A Treatise on Money’ — a work that no less than Milton Friedman wrote about approvingly in 1997. Indeed, Friedman concluded that much of the Treatise “remains of value.” I agree.

In particular, Keynes separates money into two classes: state money and bank money. State money is the high-powered money (the so-called monetary base) that is produced by central banks. Bank money is produced by commercial banks through deposit creation.

Keynes spends many pages in the Treatise dealing with bank money. This isn’t surprising because, as Keynes makes clear, bank money was much larger than state money in 1930.

A careful examination of the money supply, broadly measured, shows why the Eurozone economies have been on the brink of recession ever since Lehman Brothers collapsed in September 2008. From 2002 until Lehman, the money supply was growing at an 8.7 per cent rate. Since then, it’s slowed to 1.07 per cent (see the accompanying chart).

At first glance, this might seem rather surprising. After all, hasn’t the European Central Bank (ECB) been pumping out state money? Well, yes. But, state money is only a small part of the total money supply.

Faced with intense regulatory pressures, banks in Europe have been deleveraging big time. Credit is the life-blood for business in Europe, and excessive bank regulations like Basel III have made it scarce.

Sadly, things are only going to get worse. Over the next year, the ECB will be scrutinizing the balance-sheets of more than 120 Eurozone banks, through its so-called “stress tests.” This promises more mandatory bank deleveraging, which will result an even tighter squeeze on bank money and private credit in Europe.

Indeed, this monetary austerity might just push Europe from anaemic growth into a recession. The fiscalists can point the finger at Germany and repeat the fiscal factoid till they’re blue in the face. But, it won’t change the cold hard economic facts of Europe’s bank money blues.