Venezuela is engaged in a multifaceted “war.” The Bolivarian Republic of Venezuela’s main enemy is the private sector of the economy (read: those who hold title to private property) and anyone else (internal or external) who opposes Chavismo (read: socialism).

Wars always wreak havoc; life, property and dreams are destroyed. In the process, wars – like Venezuela’s – progressively consume a country’s accumulated capital stock, too. In other words, as wars rage on, the destructive war economy gradually eats away at productive assets like land, factory capacity, and raw materials. Just where this process leads was well illustrated by the great Austrian economist, Prof. Fritz Machlup, in a 1935 article about Austria’s World War I inflation:

In Machlup’s parable, “copper” represents the capital in an economy. Over time, war consumption and inflation eat up the economy’s physical capital. And, without capital, peoples of war‐​torn lands face a bleak future. Alas, when the dust finally settles, new questions will have to be addressed. Indeed, citizens of war‐​torn lands are always left asking, “Where’s our capital?” Yes, the “seed corn” will be nowhere to be found.

But some of the costs of war are hidden under a shroud of inflation. Inflation, too, is a problem — one that always accompanies wars. But why?

Let’s start with a typical bogus explanation for inflation troubles, one that is often trotted out by governments dealing with war induced inflation: shifting the blame. True to form, the Chavistas have claimed that the enemies of the state were engaged in a conspiracy to undermine the bolivar by flooding Venezuela with counterfeit bolivar notes.

In the case of Venezuela, Maduro’s explanation for Venezuela’s inflation problems is as phony as a counterfeit bolivar. Nevertheless, during wars, it is a standard refrain.

So what about the real causes of inflation during times of war? During a war, government expenditures typically must increase, or at least remain the same. After all, the army must be fed, war materiel must be purchased, civil servants must be paid, subsidies for basic food and fuel items must continue, and so on. While government expenditures remain robust during war, the sources of government finance become problematic. The tax system and government administration begin to break down, and tax revenues dry up. Bond financing is nowhere to be found, since investors don’t want to invest in a country that is in a state of war.

Often, combatants, including the central government, pass the begging bowl, seeking foreign aid to fill the fiscal gap. In the case of Venezuela, Russia, China and other allies of Venezuela, are an obvious source of finance, but others are not so obvious.

For example, when economic sanctions are imposed on a country like Venezuela, smuggling and other illegal activities run rampant. Misha Glenny, in his fascinating account of the Balkan wars in the 1990s — contained in McMafia: A Journey through the Global Criminal Underworld(Random House, 2008) — makes the following little understood point:

The profits generated by sanctions busting and other nefarious activities were split between the state and the deep pockets of the mafia. So the Milosevic war machine was financed, to some extent, by smuggling and other illegal activities. This, no doubt, is playing a role in Venezuela.

But, at the end of the day, as a war rages, these sources of funds fail to come close to the level of government expenditures. What to do? Well, the government simply orders its central bank to start the printing presses and fill the deficit gap. It is this surge in the supply of money that generates higher inflation rates.

Indeed, Belgrade's Top Cider Mint was working at full capacity, turning out bank notes that were worthless before the ink had dried. Finally, the mint's physical capacity  was reached. The authorities could not print enough cash to keep up. On 6 January 1994, the dinar officially collapsed.

Over the past year few years, Venezuela has been forced to let the central bank's printing presses roll, though not to the extent they did in Yugoslavia. Nevertheless, the Banco Central de Venezuela (BCV) has turned on the money pumps. In consequence, the bolivar has collapsed and inflation has soared (see the chart below). 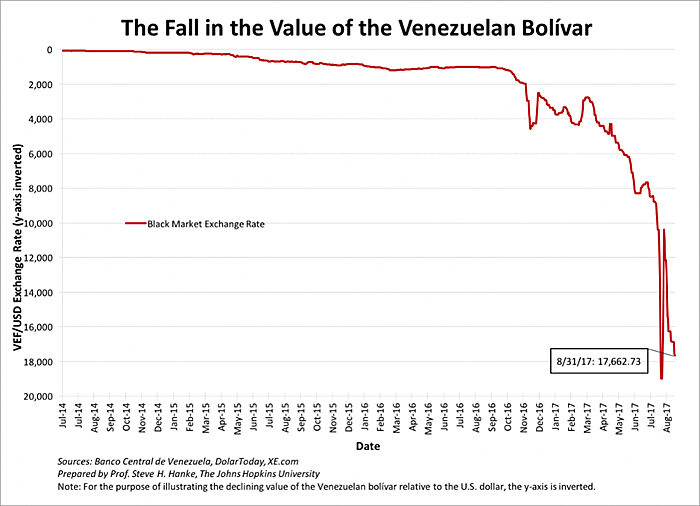 The Fall in the Value of the Venezuelan Bolivar

As the bolivar collapsed and inflation accelerated, the BCV became an unreliable source of inflation data. Indeed, from December 2014 until January 2016, the BCV did not report inflation statistics. Then, the BCV pulled a rabbit out of its hat in January 2016 and reported a phony annual inflation rate for the third quarter of 2015. So, the last official inflation data by the BCV is almost two years old. To remedy this problem, the Johns Hopkins – Cato Institute Troubled Currencies Project, which I direct, began to measure inflation in 2013. 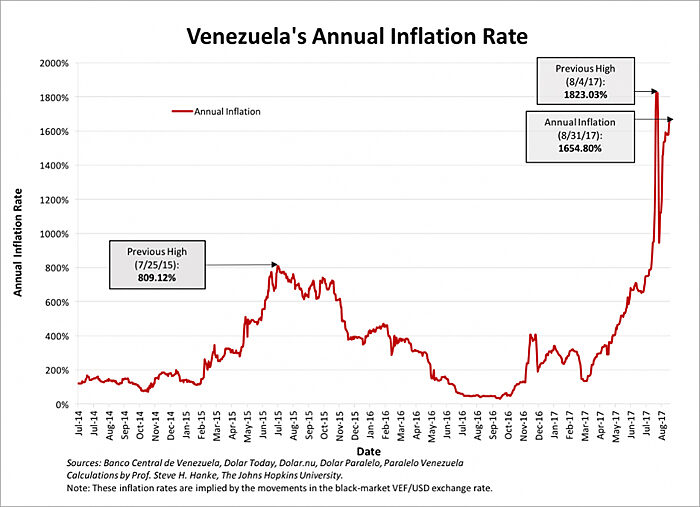 Does this inflation mean that President Maduro will be shown the door tomorrow? No. Milosevic stayed in the saddle for five years after Yugoslavia's hyperinflation peaked.