The Federal Reserve has a long history of creating aggregate demand bubbles in the United States. This was true during the era of Alan Greenspan and Ben Bernanke. In the ramp up to the Lehman Brothers bankruptcy in September 2008, the Fed not only created a classic aggregate demand bubble, but also facilitated the spawning of many market‐​specific bubbles in the housing, equity, and commodity markets. True to form, Fed officials have steadfastly denied any culpability for creating the bubbles that so spectacularly burst during the Panic of 2008-09.

If all that is not enough, Fed officials, as well as members of the U.S. Congress, have embraced the idea that stronger, more heavily capitalized banks are necessary to protect taxpayers from future financial storms. This embrace, which is reflected in the Bank for International Settlements' capital requirements regime and the Dodd-Frank Act, represents yet another great pro-cyclical monetary policy error. In its stampede to make banks "safer," the establishment created a policy-induced doom loop that has greatly slowed the recovery from the Great Recession. Indeed, new bank regulations have suppressed the money supply, broadly measured, and economic activity. This has rendered banks less "safe."

During the Greenspan-Bernanke reign at the Fed (1987-2014), nominal final sales grew at a 4.9% annual trend rate. This reflects a combination of real sales growth of 2.7% and inflation of 2.2%. But, as the chart below shows, there were deviations from the trend (read: bubbles). 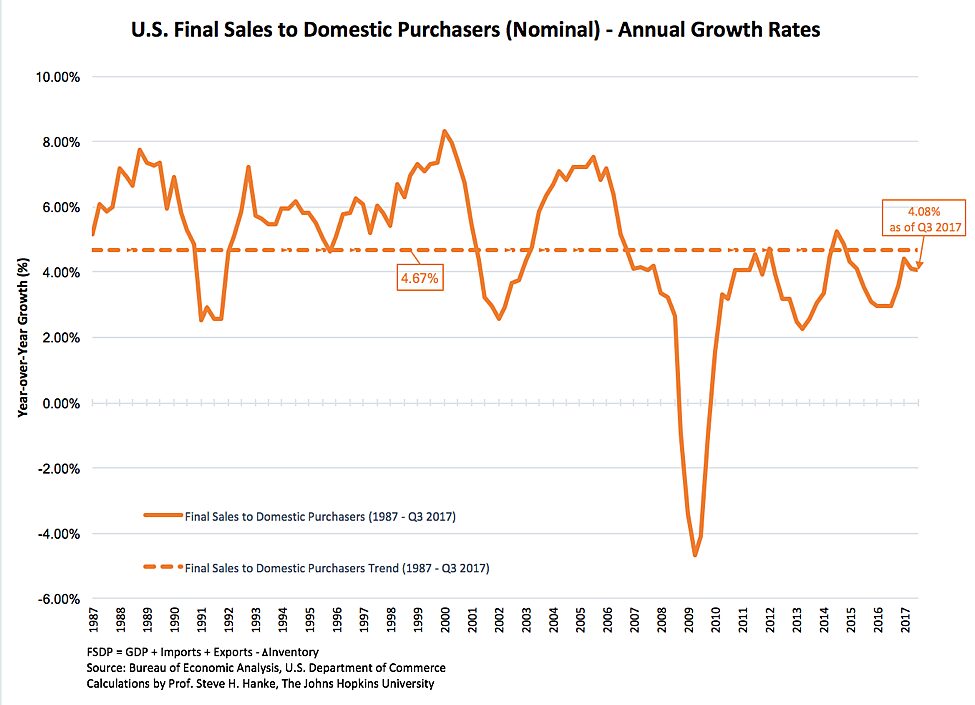 The first deviation began shortly after Alan Greenspan became chairman of the Fed. In response to the October 1987 stock market crash, the Fed turned on its money pump and created an aggregate demand bubble: over the next year, final sales shot up at a 7.5% rate, well above the trend line. Having gone too far, the Fed then lurched back in the other direction. The ensuing tightening by the Fed produced a mild recession in 1991. It was this economic weakness that cost George H. W. Bush the Presidency in 1992.

During the 1992–97 period, growth in the nominal value of final sales was quite stable. But, the successive collapse of certain Asian currencies, the Russian ruble, Long-Term Capital Management, and the Brazilian real triggered another excessive Fed liquidity injection. This monetary misjudgment resulted in a boom in nominal final sales and an aggregate demand bubble in 1999-2000. That was followed by another round of Fed tightening, which coincided with the bursting of the equity bubble in 2000 and a subsequent slump in 2001.

The last big jump in nominal final sales was set off by the Fed's liquidity injection to fend off the false deflation scare of 2002. In a dense and noteworthy speech before the National Economists Club on November 21, 2002, Fed Governor Ben Bernanke (who later became chairman) set off a warning siren and convinced his colleagues that deflation was threatening the U.S. economy. As Greenspan put it, "We face new challenges in maintaining price stability, specifically to prevent inflation from falling too low." To fight the alleged deflation threat, the Fed pushed interest rates down sharply. By July 2003, the Fed funds rate was at a then-record low of 1%, where it stayed for a year. This easing produced the mother of all liquidity cycles and yet another massive demand bubble.

Artificially "low" interest rates induced investors to aggressively speculate by chasing yield in "risky" venues and to ramp-up their returns by increasing the amount of leverage they applied. These activities generated market-specific bubbles in the housing, equity and commodity markets.

During the Greenspan-Bernanke reign, and contrary to the Fed's claims, the central bank overreacted to both real and perceived crises and created three demand bubbles. The last was one bubble too many, resulting in the Great Recession.

So the U.S. has experienced bubbles in aggregate demand. But why? These bubbles and their deflation can be laid squarely at the doorstep of the Fed. Changes in the level of nominal aggregate demand in the U.S. economy are determined by changes in the money supply, broadly measured. That's why, not surprisingly, the trend rates of growth in final sales to domestic purchasers and broad money are very close to each other: 4.08% and 4.80%, respectively (see the chart below). Money dominates. And that explains why we have not witnessed a fourth aggregate demand bubble since 1987. Indeed, the slow rate of growth in broad money, since the start of the Great Recession, tells us why the recovery has taken such a long time. 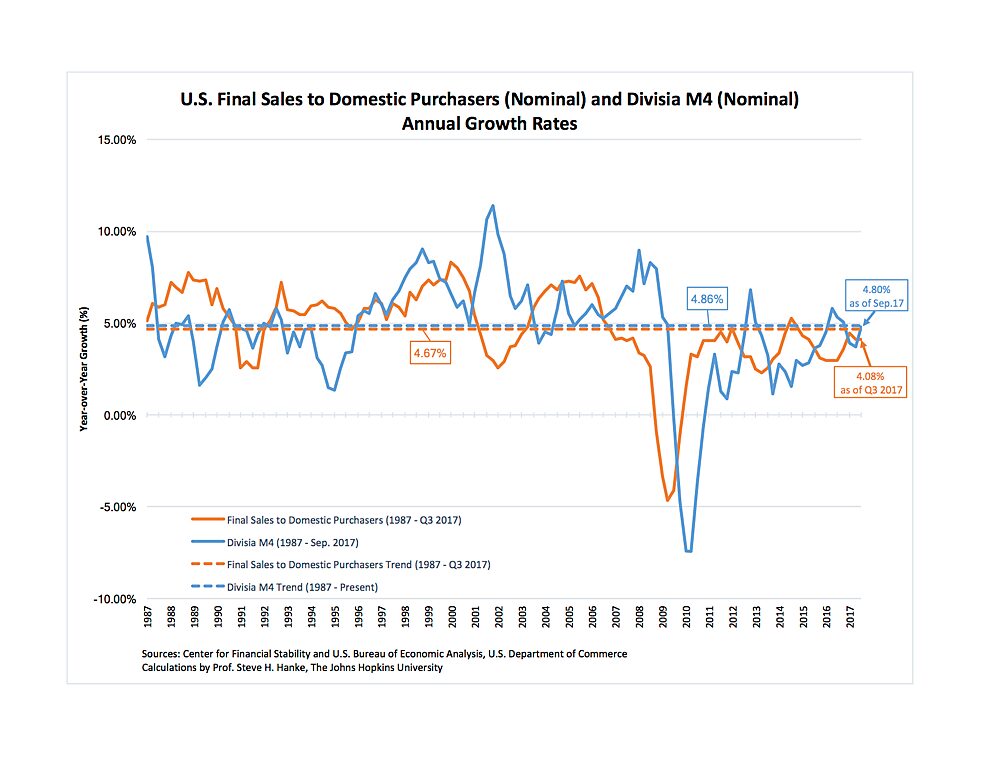