The U.S. Court of Appeals for the D.C. Circuit, often described as the second‐​highest court in the land, could rule on Halbig v. Burwell as early as tomorrow. Halbig is one of four lawsuits challenging the legality of the health‐​insurance subsidies the IRS is dispensing in the 36 states that did not establish a health‐​insurance Exchange under the Patient Protection and Affordable Care Act, or “ObamaCare,” and thus have Exchanges established by the federal government. Though the PPACA repeatedly states those subsidies are available only “through an Exchange established by the State,” and there are indications IRS officials knew they did not have the authority to issue subsidies through federal Exchanges, the IRS is dispensing billions of dollars of taxpayer subsidies through federal Exchanges anyway. The Halbig plaintiffs are employers and individuals from six federal‐​Exchange states who are being injured by the IRS’s actions because those illegal subsidies trigger taxes against them under the PPACA’s employer and individual mandates. The plaintiffs want relief from those illegal taxes, and the only way to get it is to ask federal courts to put a stop to the illegal subsidies. Recent media coverage of Halbig, driven by one‐​sided blog posts from the consultant group Avalere Health and the left‐​leaning Urban Institute and Robert Wood Johnson Foundation, has misrepresented the impact of a potential ruling for the plaintiffs by ignoring three crucial facts: (1) a victory for the Halbig plaintiffs would increase no one’s premiums, (2) if federal‐​Exchange enrollees lose subsidies, it is because those subsidies are, and always were, illegal, and (3) the winners under such a ruling would outnumber the losers by more than ten to one.

Avalere Health’s Elizabeth Carpenter blogs, “nearly 5 million Americans would receive an average premium increase of 76 percent if the courts ultimately rule that consumers in the federal exchange cannot receive premium subsidies.” In another brief post, Linda Blumberg, John Holahan, and Matthew Buettgens of the Urban Institute estimate “7.3 million people, or about 62 percent of the 11.8 million people expected to enroll in federally facilitated marketplaces by 2016, could lose out on $36.1 billion in subsidies.” These brief analyses are either misleading or outright false, because they fail to note three crucial facts.

First, a victory for the Halbig plaintiffs would not increase anyone’s premiums. What it would do is prevent the IRS from shifting the burden of those premiums from enrollees to taxpayers. Premiums for federal-Exchange enrollees would not rise, but those enrollees would face the full cost of their “ObamaCare” plans.

Critics will respond that, as dozens of economists who filed an amicus brief on behalf of the government have predicted, a Halbig ruling would also cause the full premium to rise by unleashing adverse selection. This claim is based on a fundamental misunderstanding of Halbig and the PPACA. If a lack of subsidies in federal Exchanges leads to adverse selection,Halbig is not the cause. The cause is Congress tying those subsidies to state-established Exchanges, and 36 states refusing to cooperate. Halbig will not and cannot cause adverse selection. It merely asks the courts to apply the law as Congress enacted it.

Second, Avalere Health, the Urban Institute, and media outlets that have repeated their estimates typically neglect to mention that a victory for the plaintiffs would mean the second-highest court in the land ruled the Obama administration had no authority to issue those subsidies or impose the resulting taxes in the first place — that those taxes and subsidies are, and always were, illegal. Regardless of one’s position on the PPACA, we should all be able to agree that the president should not be allowed to tax and spend without congressional authorization. That’s what’s at stake in Halbig. It is why the Halbig cases are far more important than “ObamaCare.”

The termination of those subsidies and the taxes they trigger takes on an entirely different flavor when we introduce that small detail. If the courts rule for the plaintiffs, I’ll be interested see how many news agencies use headlines like, “Ruling Denies Subsidies to Millions,” versus the more accurate, “Court Rules Obama Gave Illegal Subsidies to Millions.”

Though that small detail doesn’t change the fact that 5 million people have been deeply wronged, it does clarify who wronged them: not theHalbig plaintiffs or a few judges, but a president who induced 5 million low- and middle-income Americans to enroll in overly expensive health plans with the promise of subsidies he had no authority to offer, and that could vanish with single court ruling.

Third, these reports and the ensuing media coverage uniformly neglect to mention that a victory for the Halbig plaintiffs would free not only those plaintiffs but tens of millions of Americans from the PPACA’s individual and employer mandates. Indeed,Halbig would free from potential illegal taxation more than ten times as many people as lose an illegal subsidy.

In a Cato Institute study released last year, I estimated the number of previously uninsured individuals in each state who would be exempt from the individual-mandate tax if their state declined to establish an Exchange. In the 36 states that did not establish Exchanges, those figures provide a conservative estimate of the number of residents the IRS is unlawfully subjecting to that tax simply by issuing subsidies through federal Exchanges.

Table 1 shows that in the 36 states with federal Exchanges, a victory for the Halbig plaintiffs would free more than 8.3 million residents from being subject to those unlawful taxes. (The correct word is “free,” not “exempt.” By law, these individuals are already exempt, because their state’s decision not to establish an Exchange exempts them. The ruling would free them from being subjected to that tax anyway.) Such a ruling would free nearly 1 million Floridians and more than 1.5 million Texans from the individual-mandate tax. In 2016, it would free families of four earning as little as $24,000 per year from an illegal tax of $2,085.

Table 2 gives an indication of how many residents the 14 states with state-established Exchanges could exempt from individual-mandate penalties by opting for a federal Exchange in the wake of a Halbig victory. In that case, California could exempt more than 1.7 million residents from penalties under the individual mandate. Idaho and New Mexico have already switched to a federal Exchange, exempting roughly 78,000 and 94,000 residents, respectively. Oregon and Rhode Island are considering making the same move, which would exempt roughly 157,000 and 29,000 residents, respectively. 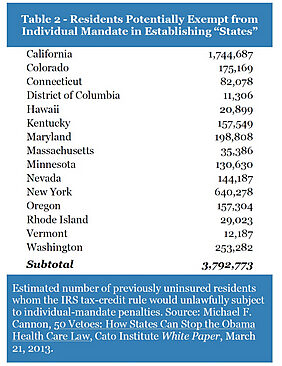 Halbig Would Free 250,000 Firms and 57 Million Employees from the Employer Mandate 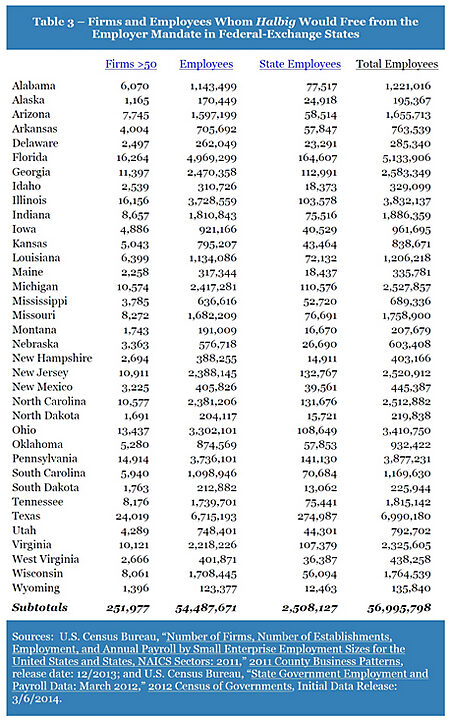 A Halbig victory would not directly affect subsidies for Exchange enrollees in the 14 states (plus D.C.) that established their own Exchanges. But it would create pressure for those states to switch to a federal Exchange. Such a ruling would (finally) give those states' officials the power to exempt large employers in the state from the PPACA's employer mandate. Table 4 shows how many firms and individuals each state and D.C. could exempt. 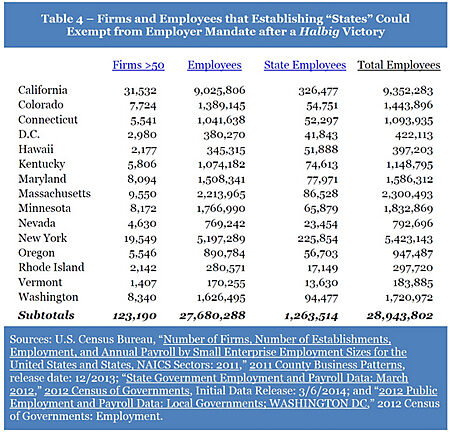 Officials in these states might be reluctant to exercise that option because it would come at the price of forgoing the Exchange subsidies many residents are currently receiving. But switching to a federal Exchange would benefit employers and individual residents seeking relief from their respective mandates. For example, many of the 32,000 firms, 1.7 million individual taxpayers, and 9.4 million employees California could exempt from those mandates could pressure state officials to make the switch. Opponents of the PPACA are also likely to apply political pressure.

Finally, state officials would also feel pressure to make the switch in order to maintain their tax bases. The employer mandate increases the cost of doing business. States where the employer mandate is operative would therefore be at a disadvantage when competing for employers against states where it is inoperative. Establishing states might fail to attract new firms and could even see existing firms relocate to federal-Exchange states. That fear alone could spur a state to make the switch.

Defenders of the IRS and uncritical media outlets are doing the public a disservice by misrepresenting the nature and the facts of Halbig v. Burwell. It is crucial that the public get the straight story. The Halbig cases are much bigger than partisan squabbles over “ObamaCare.”