In 1998, thanks to President Bill Clinton and the IMF, the Indonesian rupiah collapsed, and inflation surged.

I know every act in this play because I had a front row seat as then-President Suharto’s Special Counselor. A brief account of this sorry saga is contained in Forbes. In a nutshell, to stabilize the rupiah and stop inflation in its tracks, I proposed, and Suharto accepted, a currency board system for Indonesia. This would have made the rupiah a clone of the greenback.

The prospect of a currency board unleashed a ruthless counter-attack from the White House and the IMF. Both knew the currency board would work, and that Bill Clinton would be stuck with Suharto. The message to Suharto from both Clinton and Michel Camdessus, Managing Director of the IMF, was the same: If you proceed with Prof. Hanke’s currency board, Indonesia will not receive the $43 billion bailout. In the end, Suharto abandoned the currency board idea, and the Asian Financial Crisis ousted him.

Since my Forbes column of July 6th, 2017, White House documents that confirm my observations have been released. In anticipation of the Presidential elections in Indonesia in April of 2019, the documents were released ahead of schedule.

Shortly after the White House documents were released, journalists and a film crew arrived at my Johns Hopkins office to film part of a documentary. One question that kept coming up during the filming dealt with where I thought the rupiah was going. Obviously, there was a great deal of angst in Indonesia about the rupiah’s weakness. At the time, I simply said that the rupiah would be weaker at the end of the year than it was then (in early August). Given the trend of the rupiah-dollar exchange rate, that was a safe bet (see the chart below). Little did I know how fast the rupiah would sink. Yes, in Indonesia, everything seems to be sinking, even Jakarta—the fastest sinking city in the world. 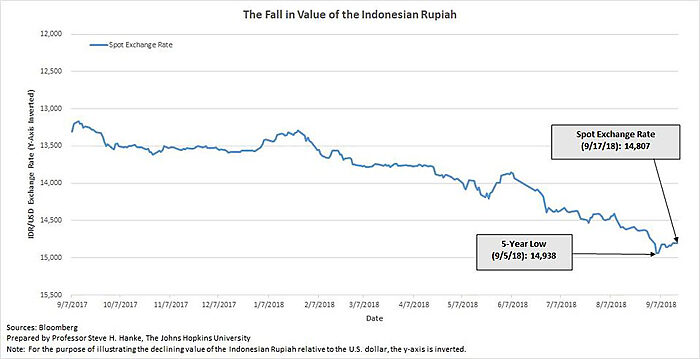 Since that August interview, the poor rupiah has been put into the emerging market meat grinder. It has reached depths not seen since 1998. But, are the causes of the fall of the rupiah the same as they were in 1997-1998? In a word, “no.”

To answer that question, I employ a monetary approach to national income determination for a diagnosis. As Milton Friedman put it in his 1987 New Palgrave Dictionary of Economics entry, “Quantity Theory of Money” (QTM), “The conclusion (of the QTM) is that substantial changes in prices or nominal income are almost always the result of changes in the nominal supply of money.” The income form of the QTM states that: MV=Py, where M is the money supply, V is the Velocity of money, P is the price level, and y is real GDP (national income).

Let’s use the QTM to make some bench calculations to determine what the “golden growth” rate (read: optional rate) is for the money supply. This is the rate of broad money growth that would allow the Bank Indonesia (BI) to hit its inflation target. According to my calculations, the average percent real GDP growth from the time that the President of Indonesia Joko Widodo “Jokowi” took office in November 2014 through July 2018 was 5.05%. The average change in the velocity of money was 1.76%. Using these values and the BI’s average inflation target of 3.88%, I calculated Indonesia’s “golden growth” rate for Total Money to be 7.17%. 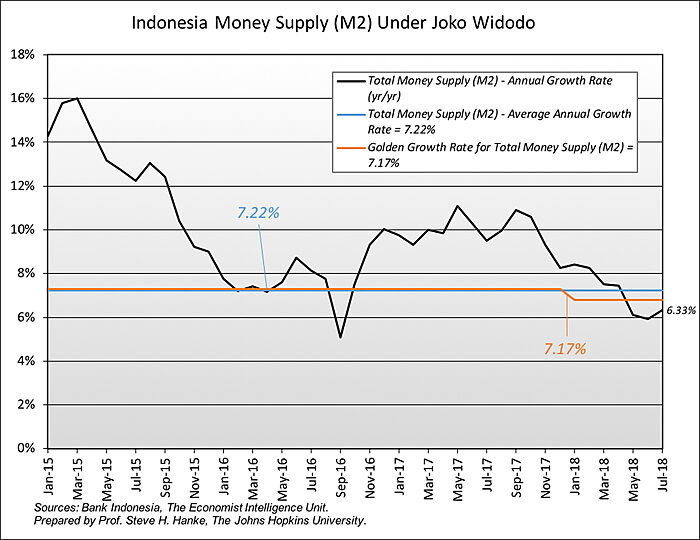 So, what’s the problem? Why are Indonesians so uneasy about the rupiah? There are three reasons. The first is the fact that Indonesians remember the Asian Financial crisis and have little confidence in the floating rupiah. Secondly, they have little confidence in Jokowi’s ability to deliver much needed economic reforms. Indeed, even though Jokowi has presented big infrastructure plans, all have proceeded at a snail’s pace. Thirdly, instead of remaining calm, the Jokowi administration hit the panic button when the rupiah was attacked in late summer. The administration said things that were nonsense, namely that it was going to “save the rupiah” at all costs and that it was not going to raise interest rates. These incompatible statements gave markets the impression that the administration didn’t know what it was doing.

So, the recent plunge of the rupiah represents a collapse in confidence. And, as John Maynard Keynes stated in The General Theory: “The state of confidence, as they term it, is a matter to which practical men always pay the closest and most anxious attention.” Once lost, confidence is hard to regain. So, as I said in August, even though the monetary fundamentals in Indonesia are quite good, the rupiah will end the year on a weak note.