Erroneous news is nothing new. No less than George Orwell was well aware of this phenomenon. Indeed, during his Spanish civil war days in 1936, he wrote these pithy remarks: “Early in life I had noticed that no event is ever correctly reported in a newspaper, but in Spain, for the first time, I saw newspaper reports which did not bear any relation to the facts, not even the relationship which is implied in an ordinary lie. … This kind of thing is frightening to me because it often gives me the feeling that the very concept of objective truth is fading out of the world.”

News organizations should enhance their credibility by using primary data whenever possible, and employ stringent fact-checking standards. When it comes to the financial press, these high standards should be relatively easy to apply. But, alas, they are not. Even high-brow publications, like The Economist magazine, play fast and loose with the "facts."

To be specific, the Nov. 4 issue of The Economist carried reportage on the ever-more acute economic disaster that grips Robert Mugabe's Zimbabwe: "Surviving Under Mugabe: Zimbabwe's Deepening Crisis." While the broad outlines of this reportage are correct, one reported "fact" in particular is simply wrong ― a real howler that any good fact checker should have flagged as an error to be corrected.

Where did The Economist come up with its 500 billion percent figure? One likely source of the error is The Economist itself. Indeed, in spite of criticism, The Economist has repeatedly peddled this error for several years. And the peddling has been successful. Every cat and dog in the financial and popular press has latched on to this piece of erroneous secondary data.

When one digs to determine how the error originally entered The Economist, the source becomes evident. As is often the case, the International Monetary Fund (IMF) is the culprit ― the source of the faulty data. The 500 billion percent figure is buried in the IMF's 2009 Article IV Consultation Staff Report on Zimbabwe. The Article IV Report states that the "12-month consumer price index (CPI) inflation is estimated to have peaked in September 2008 at about 500 billion (10^9) percent." The IMF uses the word "about" because the actual IMF staff estimate was 489 billion percent.

So the 500 billion percent figure that is reported by The Economist, and widely reported in the press, isn't even the IMF's actual estimate of Zimbabwe's peak hyperinflation but a figure that has been rounded up. Furthermore, the IMF staff did what it often does when it's unsure of its estimates: It protects its text. In this case the staff indicated that the "data have serious shortcomings that significantly hamper surveillance due to the capacity constraints."

Just why, then, is the 500 billion percent figure so far off? It turns out that Zimbabwe's episode of hyperinflation did not end, as the IMF asserts, at the end of September. Hyperinflation kept roaring away for another month and a half, until Nov. 14. During the September-November 2008 period, when the hyperinflation blow-off occurred, my team at Johns Hopkins University was the only one accurately measuring Zimbabwe's inflation. 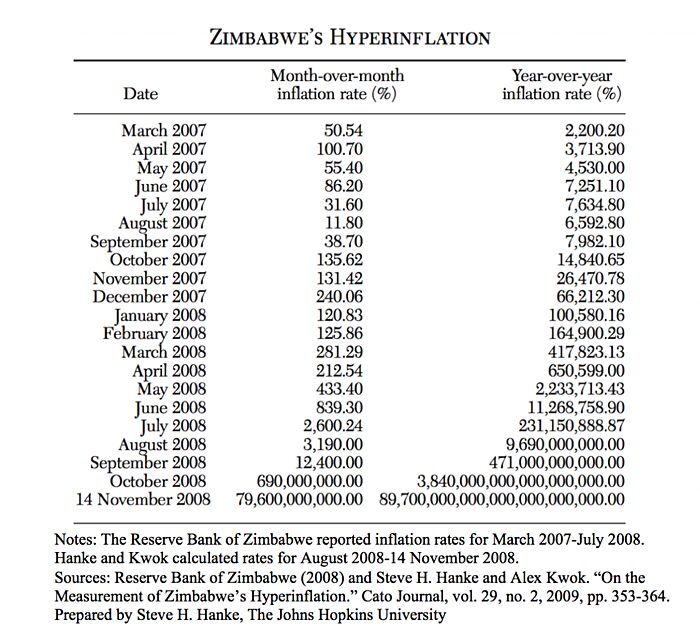 As can be seen from the table above, the peak of the hyperinflation occurred on Nov. 14, 2008, not in September as The Economist (and the IMF) would have its readers believe. And between September and Nov. 14, 2008, inflation in Zimbabwe took off like a rocket. The 500 billion percent number was left in the dust.

It's time for The Economist to hire some first-class fact checkers.

Update: After the publication of this post, The Economist updated its article to include my figure for Zimbabwe's peak hyperinflation.