Before we delve into the economic prospects for 2016, let’s take a look at the economies in the Americas, Asia, Europe and the Middle East/​Africa to see how they fared in the 2014–15 period. A clear metric for doing this is the misery index. For any country, a misery index score is simply the sum of the unemployment, inflation, and bank lending rates, minus the percentage change in real GDP per capita. A higher misery index score reflects higher levels of “misery.”

For purposes of consistency, I have used data from the Economist Intelligence Unit. Only countries with current data for 2015 are included in the accompanying tables. 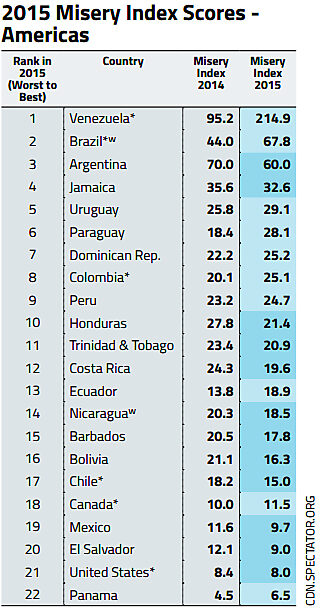 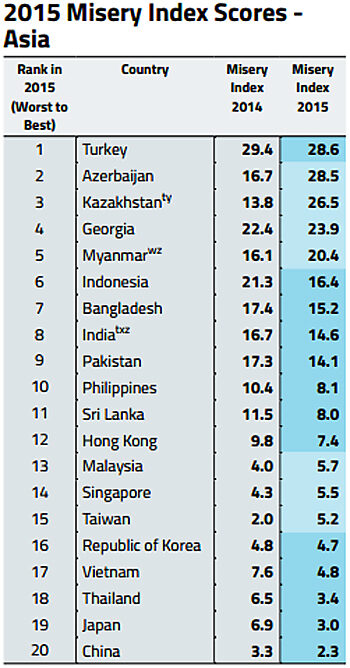 A review of these tables indicates a clear rogue’s gallery. It includes the following countries with misery index scores of 40 or above: Venezuela, Brazil, Argentina, Ukraine, and South Africa. The only region not contributing to that gallery is Asia. But, that’s not the end of the story. All countries with scores over 20 are seriously deficient. These countries are ripe for reform.

Turning to 2016, it started with a bang. The world’s major stock markets are volatile and in negative territory. Commodity markets, led by oil, continue to plunge, and so has the value of most emerging market currencies against the U.S. dollar. Combined public and private debt levels relative to GDP have soared, and are well over the ratios that existed during the top of the last credit cycle in 2007. With this debt binge, the level of non-performing loans on banks’ books has soared, too. And if that’s not enough, the Institute of International Finance has just increased its estimate of net capital outflows from emerging markets in 2015 to $735 billion, with $676 billion of capital flight coming from China alone. Talk about a carry trade unwind.

The World Bank and the International Monetary Fund (IMF) have been revising downward their forecasts for global GDP growth. At present, the World Bank forecast for global GDP growth in 2016 is a paltry 2.9 percent, while the IMF’s 2016 forecast of 3.4 percent isn’t much better. It’s becoming clear that the global economy will face headwinds in 2016. It’s no surprise, therefore, that many are in a state of high anxiety and that a spiral of pessimism is developing.

One of the major sources of the storm is ironically what statists and interventionists around the world (read: “The Establishment”) think will save us — namely, big governments. More specifically, the academic literature has dubbed them “Big Players.” While there is a budding and serious academic literature on Big Players, or what could be termed Market Disrupters, there is virtually no mention in the financial press that the Big Players might just bury us. Perhaps this is because the valuable insights provided by the rigorous, and what is at times quite technical, analysis of Big Players is very contra-establishment. Indeed, instead of stabilizing markets, the Big Players disrupt them. They are the purveyors of instability. For those who wish to grapple with the technical literature, I recommend: Roger Koppl. Big Players and the Economic Theory of Expectations. New York: Palgrave Macmillan, 2002.

Big Players have three defining characteristics. Firstly, they are big — big enough to influence markets. Secondly, they are largely insensitive to the discipline of profits and losses — in short, immune from competitive pressures. Thirdly, they act with a large degree of discretion in the sense that their actions are not governed by a prescribed set of rules.

With these characteristics, Big Players are hard to predict. In consequence, they can disrupt. Among other things, they divert entrepreneurial attention away from the assessment of strictly economic market fundamentals — the present value of prospective cash flows and services generated — toward the actions of the Big Players. These are inherently political, and subject to unpredictable change. This reduces the reliability of expectations, with skill becoming devalued and luck counting for more.

The Big Players’ discretionary interventions render most market signals about fundamentals unreliable. They create environments that are ripe for herding and bandwagon effects, as well as noise trading, which is subject to fads and fashions. This explains, in part, why investment groups are spending big bucks to create a thinking, learning, and trading computer — a search for a super-algorithm. Never mind. Big Players increase volatility and create bubbles. They are the disrupters of the universe.

Closely related to the Big Players problem is a strand of innovative analysis pioneered by Robert Higgs of the Independent Institute. It concerns what Higgs calls “regime uncertainty.” Regime uncertainty relates to the likelihood that investors’ private property in their capital and the flows of income and services it yields will be attenuated by government action (read: the discretionary action of Big Players, among other things). As regime uncertainty is elevated, private investment is notched down from where it would have been. This can result in a business-cycle bust and even economic stagnation. For Higgs’ most recent book, which contains evidence on the negative effects of regime uncertainty, I recommend: Robert Higgs. Taking a Stand: Reflections on Life Liberty, and the Economy. Oakland, CA: The Independent Institute, 2015.

The real question is: are Big Players ascending or descending? In gathering data to answer this question, I have become convinced that the Big Players problem is big and getting bigger. Indeed, the problem has become much more pronounced since the onset of the great recession of 2008-2009.

Most central banks possess all the characteristics of Big Players in spades. Since the advent and implementation of quantitative easing (QE), they have become bigger players, with the state money they produce making up a much greater portion of broad money (state, plus bank money) than before 2009. Not only have their balance sheets exploded, but the composition of some of their balance sheets has changed in surprising ways. It used to be that central bank assets were solely comprised of domestic and foreign government bonds. Well, now you can find corporate bonds on some central bank balance sheets. And that’s not all. Central banks use their discretion to purchase equities, too. Just take a look at the Swiss National Bank (SNB), one of the alleged paragons of conservative central banking. By late last year (Q3), the total value of stocks held by the SNB had risen to $38.95 billion. That’s the size of some of the largest hedge funds in the world, and amounts to over 5 percent of Switzerland’s GDP.

The Bank of Japan (BoJ) is also openly a big buyer of stocks — namely, Japanese ETFs. The BoJ is authorized to purchase roughly $25 billion of ETFs per year, and the government leans on the BoJ to use its fire power — especially when the Japanese stock markets are “weak.”

Less surprising is the stock-buying propensity of the People’s Bank of China (PBoC). It has thrown hundreds of billions of yuan into purchasing publically listed Chinese shares in a bid to stave off multiple stock market crashes. And, when it comes to Chinese markets, the PBoC is not alone. When Beijing cracks the whip, the “national team” — a group of state-owned banks, brokers, pension funds, government agencies, and you name it — either buy or sell. Much of the same goes on in Russia and elsewhere, but in those places the scope and scale of the Big Player phenomenon is no match for that of the Middle Kingdom.

Right behind central banks are sovereign-wealth funds (SWFs). With over $7 trillion in assets, they are huge. But, transparency (read: disclosure rules) with regard to size, holdings and strategies is limited. About all we know is that when the SWFs’ political masters command, the SWF technocrats march.

Then there are traditional state-owned enterprises (SOEs). While the wave of privatizations that started in the late 1970s put a dent in the SOEs, they remain Big Players in many countries. And, when compared to similar private enterprises, their actions are more unpredictable and their performance is dismal. Sales per employee are lower for SOEs. Adjusted profits per employee are lower. Per dollar of sales, operating expenses plus wages are higher. Sales per dollar investment are lower. Profits per dollar of total assets are lower. Profits per dollar sales are lower. Sales per employee grow at a slower rate. And, with the exception of state-owned oil companies, who often have considerable monopoly power, most traditional SOEs generate accounting losses.

But, traditional SOEs are only the tip of the iceberg. State capitalism — a model in which governments pick winners and use capitalist tools such as listing SOEs on stock markets — is on the rise. With state capitalism, the visible hand of the State replaces Adam Smith’s invisible hand of the markets. State capitalism runs the gamut from public-private partnerships to SOEs, and highlights the relevance of the Big Player problem. For a review of State Capitalism, I recommend the special report on that topic, which was published in the 21 January 2012 issue of The Economist. A review of that edifying report will convince the reader that the Big Player problem lurks everywhere.

Why Are Supposed “Progressives” so Unable to Foresee Economic Change?