For years we have been hearing that a major reason college prices are so high is that state governments, which directly subsidize public colleges, keep cutting what they spend on higher education. With that in mind, a component of many “free college” proposals we’ve been offered—and which may proliferate especially if Democrats have a good day in the midterm elections—include the federal government incentivizing states to greatly increase their subsidies to public institutions. But some new, long‐​term data undermine the “cheap states” theory.

For years we have been hearing that a major reason college prices are so high is that state governments, which directly subsidize public colleges, keep cutting what they spend on higher education.

As I have indicated with some basic revenue analysis, and others have shown with a deeper dive, the theory does not hold up well under scrutiny. And now the State Higher Education Executive Officers Association (SHEEO), a group that has long helpfully published data on public college finances, has posted longer term data than they have made readily available—and I have used—in the past. Now going back to 1980, the data reinforce the conclusion that public institutions have been increasing revenue coming through students not to offset flagging direct subsidies, but quite possibly because increasing revenue through tuition is, well, just what they do. At the very least, they don’t decrease tuition when appropriations times are flush.

Looking at the first table below, the trend is clear: whether state and local appropriations per full-time equivalent (FTE) student rose or fell, revenue through net FTE tuition constantly increased. (“Net tuition” is “the gross amount of tuition and fees, less state and institutional financial aid, tuition waivers or discounts, and medical student tuition and fees.” “Appropriations” exclude “special-purpose, research, and medical” outlays.) Only once—between 1999 and 2000—did tuition revenue per FTE fall, and then only by $24 dollars. The average change year-to-year was an increase of $165. The rate of increase tended to be greater in the latter years, when state and local subsidies dropped, but the overall trend is unmistakable: money through students rose no matter what appropriations did. 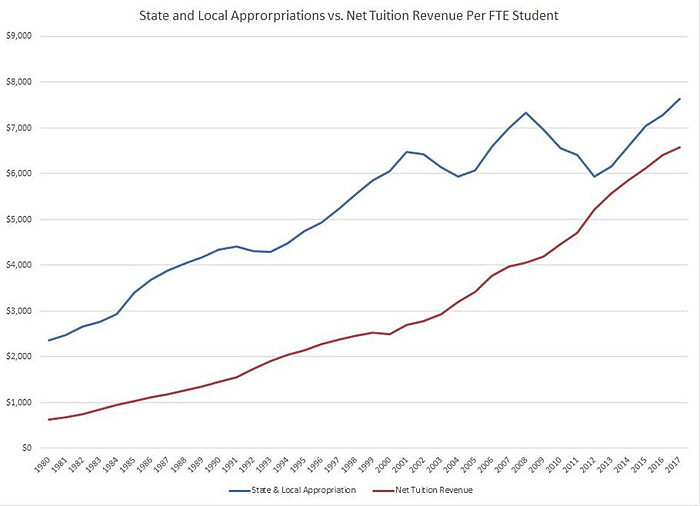 Note that the above table is not adjusted for inflation. As such, it better reflects what policymakers and college officials actually saw from year to year when setting appropriations and tuition levels. That said, adjusting for inflation shows much more of an up-and-down roller-coaster appropriation trend, but the same failure to cut revenue coming through tuition when direct subsidies were up, and to often increase tuition while appropriations rose, still applies.

Looking at the second table we see that funding has enriched public institutions on a per-student basis, this time after adjusting for inflation using the Higher Education Cost Adjustment (HECA), which SHEEO uses and is pegged roughly to the costs of higher education inputs, not inflation as we usually think of it. The latter is based on a “basket of goods and services” regular people buy. Using HECA, revenue per FTE rose from $10,485 in 1980 to $14,215 in 2017, a 36 percent increase. But that’s not all! FTE enrollment has ballooned since 1980—it’s a big reason inflation-adjusted appropriations per student were overall pretty flat—from about 6.9 million to 11.0 million students. The upshot is public colleges have seen inflation-adjusted, total revenue from appropriations and net tuition increase from about $71.8 billion in 1980 to $155.7 billion in 2017—more than a doubling! 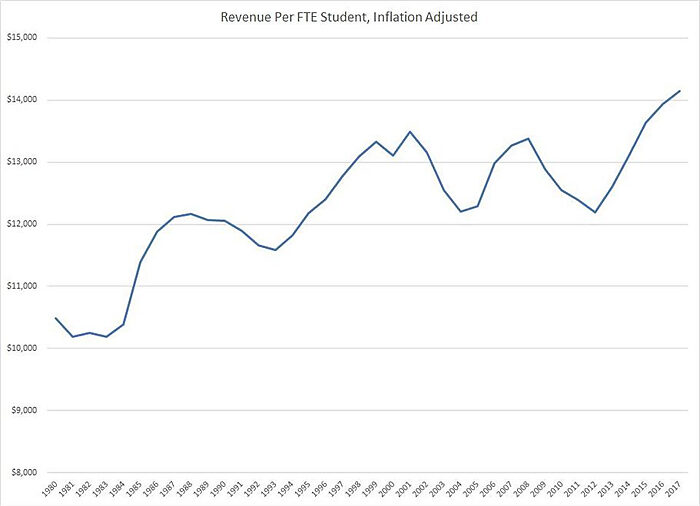 The college price problem is not cheap states, or at least not cheap state and local governments. What these data suggest is that public college revenue through tuition increases no matter what happens with appropriations. Such increases may well largely be on automatic pilot because everyone expects them, and because someone ensuresstudents can pay them.

How the Private Sector, Not Big Government, Can End the Student Debt Crisis

The Whole Ivory Tower Is Full of Cracks