They will have their work cut out for them dealing with US demands to liberalize sensitive UK trade barriers, including both tariffs and regulations that affect trade, while at the same time pressing the United States to reduce its own tariffs and regulatory barriers.

In a world run by free traders, both sides would come forward with an offer to remove all barriers, and the negotiation would be short and sweet. However, the political reality is that trade agreements are a careful balance of “concessions” on market access by each side.

There are systemic issues related to the governance of trade agreements that are important as well. The UK negotiators should not ignore these, because they affect the long‐​term functioning of the agreement. In particular, the UK negotiators should be aware of two positions taken by the Trump administration in the renegotiation of the North American Free Trade Agreement*: to maintain weak dispute settlement and to add a “sunset clause” to the agreement.

These issues may make an appearance in the US-UK trade talks and the UK negotiators should be ready.

On dispute settlement, a crucial element to a functioning process is that parties should be able to file complaints and get a neutral panel appointed to hear the dispute whenever needed. NAFTA was famous for the problem of “panel blocking” and was fundamentally flawed in this area.

The dispute process worked for a few years, but then in 2000 the United States took advantage of a gap in the rules in order to stop a panel from being appointed to hear a complaint about US restrictions on imported sugar. No panels were appointed after that incident.

There were calls to fix this issue in the NAFTA renegotiation, but the United States resisted, and the first version of the new NAFTA (the USMCA) did not solve the problem. Eventually, in response to demands by the House Democrats, the Trump administration agreed to make changes, which appear to have dealt with the issue.

If confronted with this issue, the UK negotiators should insist on dispute settlement rules that function properly, including a guarantee of a dispute panel when needed.

The United Kingdom should seek solid governance and dispute settlement provisions in its free trade agreement with the United States.

The Trump administration may fight hard to maintain the flexibility to block panels. The UK should be prepared to review the text of all U.S. proposals carefully and to demand an enforceable system.

With regard to the sunset clause, initial reports were a bit vague, but they seemed to suggest that the agreement would expire after five years unless the parties agreed to extend it. In the end, after push back from the other parties, the negotiated agreement shifted to a more complex arrangement that has the agreement last for 16 years, but at year 6 the parties will review the agreement and decide whether to extend it for another 16 year period.

This provision will generate uncertainty and confusion, without offering any benefits. Parties are always free to withdraw from an agreement, so this additional termination option does not add much. Moreover, a presumption of termination unless the parties affirmatively agree to extend is a particular problem, as the uncertainty it creates would undermine the value of the agreement to the companies who trade or invest on the basis of the agreement.

In addition, the six year review provision may mean less reviewing than is already possible. Reviews of trade agreements are valuable, and they should be undertaken regularly through the joint committees/​commissions that these agreements normally establish. However, a big, high profile six year review may preempt the normal schedule of meetings between the parties where these reviews should be conducted.

Trade governance issues can be dry and technical and their impact difficult to assess. But they are important for the proper functioning of an agreement.

The Trump administration has some unorthodox views in this area, and the UK negotiators should be ready to defend against the demands they may face.

The New NAFTA and the End of U.S. Leadership in Trade 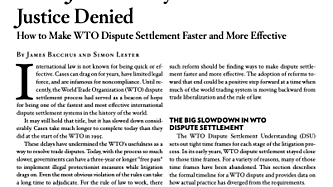