In 2010, Brazil’s Finance Minister, Guido Mantega, coined the phrase “currency war” when he complained about the “cheap” Chinese renminbi (RMB). Mantega claimed this gave China an unfair trade advantage. As he put it to the Financial Times, “we’re in the midst of an international currency war, a general weakening of currency. This threatens us because it takes away our competitiveness.”

That was then. Now the Brazilians are conspicuously silent, because the shoe is on the other foot. The Brazilian real has lost a whopping 25% against the RMB since January 2015. The currency wars continue and are every bit as intense as they were back in 2010, when Mantega coined the phrase.

But, the conventional wisdom about the wonders of weak currencies long predates Mr. Mantega — economists and political leaders have been deceiving the public on the advantages of currency devaluations for centuries.

For the public, this argument has a certain intuitive appeal. After all, a devaluation is seen as nothing more than a price reduction for domestically produced exports, and price reductions are always seen as a means to increase the quantity of goods sold. When it comes to currency devaluation, the analysis is not that simple, however. Even if we use a narrow, Marshallian partial equilibrium model (one consistent with the common man's economic intuition) to determine the effects of a devaluation, the analysis becomes quite complicated. Contrary to the common man's conclusion, a devaluation will often result in a reduction of exports and a deterioration in a country's trade balance and balance of payments. When the models become more general and inclusive, a light shines even more brightly on just how confusing and contradictory the arguments favoring devaluations are. Calls for devaluations, as popular as they might be, are a delusion.

But, without entering the technical weeds of economic analysis, it is clear why a devaluation strategy is a loser's game. In 1947, the famous Cambridge don Joan Robinson penned "Beggar-My-Neighbor Remedies for Unemployment." She not only coined the phrase "beggar-my-neighbor," but concluded that so-called competitive devaluations would be unsuccessful in achieving their advertised objectives. Among other things, Robinson wrote that a devaluation would prompt a retaliation in the form of a competitive devaluation. Thus, the initiator of a currency war could, and would, always be neutralized — checkmate.

Evidence from Indonesia, for the 1995 – 2014 period, is typical. When the rupiah depreciated in real terms against the U.S. dollar, lower levels of exports were realized. On the other hand, exports were higher when the rupiah appreciated in real terms (see the accompanying chart). This is exactly the opposite of the relationship advertised by those who embrace devaluation strategies. They claim that real devaluations will make exports boom, and that currency appreciations will kill them. 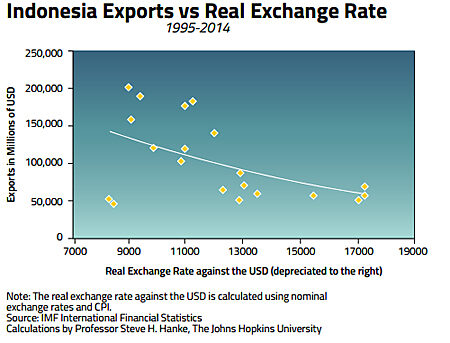 The case of China, like that of Indonesia's, runs counter to conventional wisdom. China, from 1995 – 2014, is of particular interest and importance because the RMB is at the center of the so-called currency wars. As the accompanying chart shows, the RMB, in real terms, has mildly appreciated against the greenback, and Chinese exports have soared. These data not only poke a hole in the layman's notions about the wonders of weak currencies, but also illustrate why most politicians are ignorant of the basic facts, and could be successfully prosecuted for false advertising. 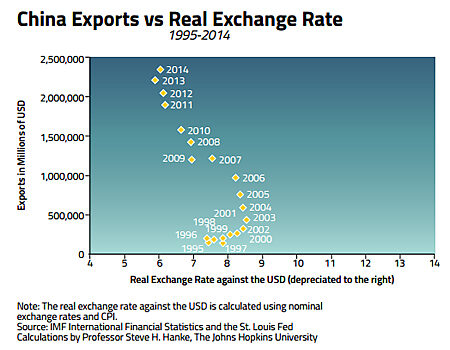 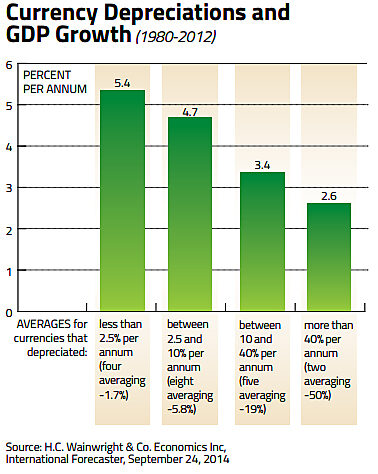 So, if devaluations fail to deliver more trade and higher GDP growth rates, what do they deliver? Well, one thing devaluations deliver is inflation. If we measure the strength of local currencies by the price of gold in those currencies, a virtual one-to-one relationship between the increase in the price of gold in a local currency (a weakening currency value) and a country's annualized inflation rate exists. The accompanying chart for nineteen developing countries, over the 1980 – 2015 period, shows the tight link between a weaker currency and higher inflation rates. 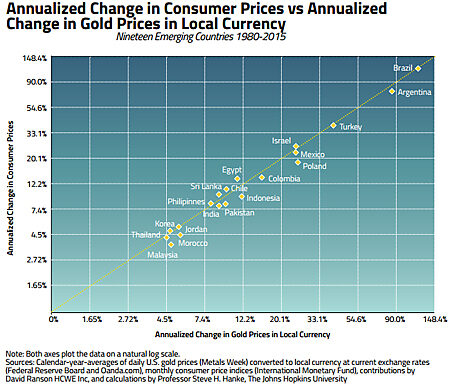 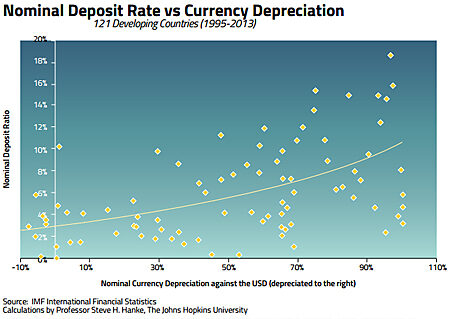 The arguments supporting currency devaluations are utterly confused and contradictory supported by neither economic theory nor empirical evidence.