The specter of currency wars rises like a phoenix once again. This time around, most of the warriors reside in Washington, D.C.. The strong dollar has inflamed the currency warriors (read: mercantilists) led by Democratic Senator Chuck Schumer from New York and Lindsey Graham, a Republican Senator from South Carolina. These mercantilists argue that “cheap” foreign currencies give the U.S.’s trading partners an “unfair” advantage, something worth doing battle over.

About the only thing the mercantilists have right is the fact that the U.S. dollar has been strengthening. As the accompanying chart shows, the currencies of all the U.S.’s top trading partners have lost value against the greenback over the past six months. These losses have ranged from 1.8% for the Chinese yuan to 21.6% for the Brazilian real. Russia, the fifteenth largest trading partner of the U.S., has seen the value of its ruble fall 39.5% over the past six months. 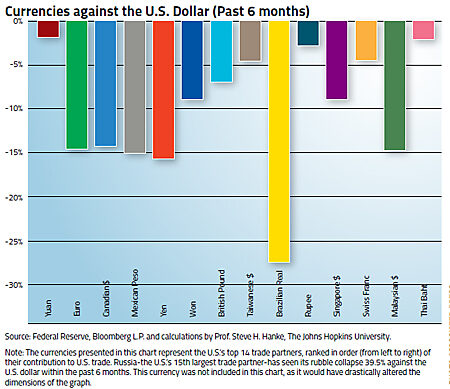 So, the currency hawks want to do what they always want to do: go to war. The particular trigger is the Trans-Pacific Partnership (TPP), a trade agreement between Asian countries and the U.S.. With this agreement, which the Obama administration is pushing for, the currency warriors have spotted an opening. They want to insert enforceable rules against so-called currency manipulation into the TPP.

All this saber rattling is a broken mercantilist record, particularly with regard to the U.S.'s biggest Asian trading partners: Japan and China. Indeed, these two countries have accounted for the lion's share of the U.S. trade deficit over the past twenty years (see the accompanying chart). 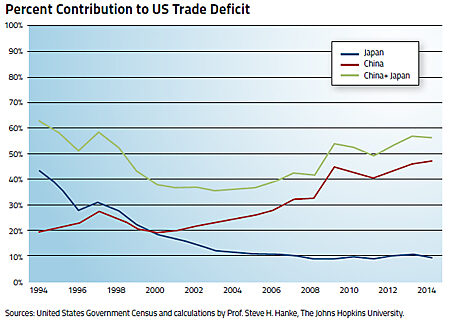 From the early 1970s until 1995, Japan was viewed by the mercantilists as an enemy. They asserted that unfair Japanese trading practices caused the U.S. trade deficit, and that the U.S. bilateral trade deficit with Japan could be reduced if the yen appreciated against the dollar — a “weak dollar policy.” Washington even tried to convince Tokyo that an ever-appreciating yen would be good for Japan. Unfortunately, the Japanese complied and the yen strengthened, moving from 360 to the greenback in 1971 to 80 in 1995.

In April 1995, Secretary of the Treasury Robert Rubin belatedly realized that the yen’s great appreciation was causing the Japanese economy to sink into a deflationary quagmire. In consequence, the U.S. stopped arm-twisting the Japanese government about the value of the yen and Secretary Rubin began to evoke his now-famous strong-dollar mantra.

The U.S. trade deficit is the result of a U.S. savings deficiency, not exchange rates.

But, while this policy switch was welcomed, it was too late. Even today, Japan continues to suffer from the mess created by the yen's appreciation.

As Japan's economy stagnated, its contribution to the increasing U.S. trade deficit declined, falling from its 1991 peak of almost 60% to 9.3% today. While Japan's contribution declined, China's surged from slightly more than 9% in 1990 to 47.2% today. With these trends, the Chinese yuan replaced the Japanese yen as the mercantilists' whipping boy.

Interestingly, the combined Sino-Japanese contribution to the U.S. trade deficit has actually declined from its 1991 peak of over 70% to 56.7%. This hasn't stopped the mercantilists from claiming that the Chinese yuan is grossly undervalued, and that this creates unfair Chinese competition and a U.S. bilateral trade deficit with China. 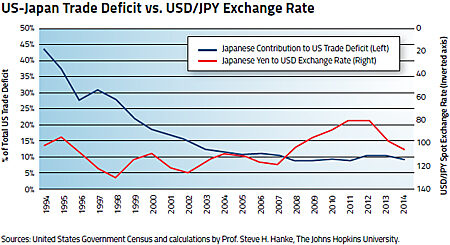 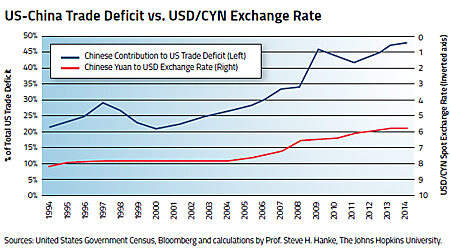 But, evidence fails to sway the mercantilists. They still want tough currency manipulation provisions inserted into the TPP. They don’t realize that the term “currency manipulation” is hard to define and, therefore, is not an operational concept that can be used for economic analysis. In consequence, currency manipulation rules would be almost impossible to implement. The U.S. Treasury (UST) has acknowledged this fact in reports to Congress. Indeed, in 2007, the UST attempted to have the International Monetary Fund (IMF) act as a currency cop and go after manipulators. Raghuram Rajan, who is currently governor of India’s central bank and was the IMF’s chief economist in 2007, pronounced the episode an “unmitigated disaster.”

It isn’t only the mercantilists’ pols who don’t understand that nominal exchange rates don’t have much to do with trade deficits. Some economists — most notably C. Fred Bergsten of the Peterson Institute for International Economics and supply-side guru Arthur B. Laffer — don’t seem to understand the economics behind the U.S. trade deficit, which has been with us since 1975. Those economics were fully explained by one of my occasional collaborators, the late Ronald I. McKinnon from Stanford University. Indeed, he elaborated on them in his last book, The Unloved Dollar Standard: From Bretton Woods to the Rise of China(2013). In short, the U.S. trade deficit is the result of a U.S. savings deficiency, not exchange rates. As a result, the trade deficit can be reduced by some combination of lower government consumption, lower private consumption or lower private domestic investment. You wouldn’t know this basic truth by listening to the rhetoric coming out of Washington.

Digging in for a Long Fight