In Washington, D.C., tax reform often means something painful to the taxpayer–higher taxes to pay, more forms to fill out, and a bigger headache to endure every April 15. But one idea that’s gaining new converts every day would dramatically change all that, and families and businesses would be among the nation’s biggest winners if it becomes law.

The idea is to tear up the federal income tax system, scrap it for good, and replace it with a national sales tax. Here’s how it would work, and why every citizen ought to give it serious thought.

The individual and corporate income tax, the capital gains tax, and the estate and gift taxes would all be eliminated. In their place, a new national sales tax (NST) of 15 percent would be charged on the final purchase of all goods and services at the retail level. There would be a universal rebate for every household that would in effect exempt all consumption up to the poverty level. Households with total expenditures at and below the poverty level would therefore receive a rebate for every penny they paid for the NST.

Under this new system, April 15 would once again be just another day. Americans would have already paid their federal tax burden at the cash register throughout the course of the year. As a result, individual taxpayers would no longer have to spend countless hours filling out forms–or pay accountants to do so. And they would no longer be required to reveal to the IRS the intimate details of how they earned and spent their money.

They would no longer have to live in fear of accidentally violating the letter of the incomprehensible U.S. income tax law and thereby incurring the wrath of the unforgiving IRS. The Internal Revenue Service’s abusive practice of conducting searches without a warrant and seizing assets without a trial would be brought to a screeching halt.

Some recommend tinkering with it, making it flatter and simpler. That would be a step in the right direction, but why not scrap the system completely and start from scratch?

Since all but five states already have their own sales taxes, the state revenue departments would be the logical choice for collecting the NST. However, they would be fully compensated for their administrative costs by being allowed to keep a certain percentage of the revenue they collect. Businesses would also be reimbursed for their administrative costs.

The NST would bring an end to the IRS as we know it. The Social Security Administration could collect payroll taxes, and a new agency within the Treasury Department could be set up to administer the collection of NST revenue from the 50 states and to collect excise taxes. Sound like a good idea? Well there’s more.

Our current system punishes the saver. Take for example a family in Michigan earning $36,426 (which is the median household income in Michigan for 1995). That family is taxed once on their wages and salaries before they even see their paycheck. Now, say they save about $152 per month. They are then taxed a second time on the interest and dividends that they earn on that savings.

If they had instead spent that $152, the federal tax collectors would not have taken another dime from them. But, since they saved it, the feds taxed them twice. That double taxation penalizes saving and investment, thereby making it harder for families to save for their children’s education and for their own retirement. The NST would put an end to all that. The double taxation and the anti‐​saving bias present in our current tax code would be eliminated.

An additional effect of our current double taxation of saving and investment income is that it increases the cost of capital. That makes it more expensive for businesses to obtain the financial resources they need to invest in new equipment and technologies. This is particularly burdensome for capital‐​intensive industries like manufacturing and, therefore, for states with large manufacturing sectors.

The NST would put an end to that anti‐​capital bias. Furthermore, since the NST would be charged only on “final” products, it would exempt all goods and services that are purchased for use in the production of taxable goods and services. That means, when a manufacturer purchases a new machine that it will use to produce widgets, the widgets will be taxed, but the machine will not be. That simple rule contrasts sharply with the way our current system treats business inputs, in which businesses must hire armies of accountants to deal with bafflingly complex depreciation formulas and the like. Manufacturers are amongst those that stand to gain the most from getting rid of that system and replacing it with the NST.

Our federal income tax system is broken. Some recommend tinkering with it, making it flatter and simpler. That would be a step in the right direction, but why not scrap the system completely and start from scratch? Replacing our failed income tax system with a national sales tax would get the IRS out of our lives and make April 15 just another day. 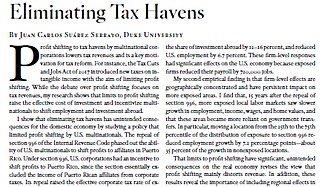