Nearly all banks and non‐​bank financial institutions are heavily controlled by the state, interest rates and the exchange rate are tightly regulated, the capital account is mostly closed; and credit allocation is politicized, with preference given to state‐​owned enterprises (SOEs).

There has been some liberalization of the financial sector and interest rates, and the exchange rate is more flexible than previously, but the lack of widespread private ownership and free entry has limited competition and hampered the efficient use of scarce capital.

China’s efforts to commercialize its banks have been half‐​baked: Without well‐​defined private property rights and a legal system that supports economic and personal freedom, including the free flow of information, China’s dreams of becoming a world‐​class financial center and internationalizing its currency remain unfulfilled.

Free markets have lifted far more people out of poverty than central planning.

As the world’s second-largest economy and the number one trading nation, China needs vibrant capital markets and a sound banking system. Bank managers are still appointed by the Chinese Communist Party (CCP), the People’s Bank of China (PBOC) is subject to political control by the State Council, commercial banks are subject to credit quotas, brokerage firms are state owned, and stock markets are more like casinos than mechanisms for allocating capital to productive uses that increase overall wealth.

State-owned banks lend primarily to SOEs, though lending to the private sector has increased in recent years; financial repression has led to negative real interest rates on deposits and to the emergence of a shadow banking system. Capital controls are porous and China is now facing substantial capital outflows as its economic growth slows and as people become more uncertain of the leadership’s ability to stabilize stock prices and prevent further declines in property values.

The challenge for China is to abandon the legacy of central planning and embrace capital freedom. Expanding the range of choice in financial decisions and depoliticizing investment decisions would go a long way toward creating the harmonious society that President Xi Jinping and Premier Li Keqiang desire.

The legacy of central planning

Under central planning, China’s financial system was primitive. There was no real commercial banking system, no capital markets, and no market-determined interest rates. China was a small, closed economy and the PBOC was the only bank. It exercised strict control and was responsible for following the central government’s credit allocation plan. Investment decisions were politicized and private property outlawed.

The legacy of state-led credit planning, interest-rate controls, preferential treatment of SOEs, and a closed capital account still plague China’s financial system. Nevertheless, much progress has been made in liberalizing the financial sector even though it is best described as “market socialism” rather than “market liberalism.”

From plan to market

At the beginning of the reform era, China had a Soviet-style mono-bank system. In 1984, the government created the “Big Four” state-owned commercial banks (SOCBs): Industrial and Commercial Bank of China (ICBC), China Construction Bank (CCB), Agricultural Bank of China (ABC), and Bank of China (BOC). The ICBC is now the largest bank in the world, followed by CCB, ABC and BOC.

The Commercial Bank Law, promulgated in 1995, gave the PBOC greater autonomy while maintaining oversight by the State Council. In 1998, the Ministry of Finance began to recapitalize small and medium-size, state-owned commercial banks to rid them of their non-performing loans (NPLs). Four asset management companies (AMCs) were set up in 1999, and during 2003–08, they successfully restructured the CCB, BOC, ICBC and ABC.

As part of that restructuring, China began to convert the Big Four state-owned commercial banks into joint-stock corporations in 2005, with government entities retaining majority ownership and holding non-tradable shares. The goal of “equitization” was to make banks more market oriented — that is, to commercialize lending, eventually bringing lending practices up to world standards. Although the Big Four have become powerhouses, the lack of full private ownership, restrictions on tradable shares, and dependence on the CCP to appoint bank officers have diminished incentives to efficiently allocate funds.

Besides bank restructuring, financial reforms have partially liberalized interest rates, allowed the yuan-dollar exchange rate to be more flexible through a managed float, linked the Hong Kong and Shanghai stock exchanges, opened capital markets to qualified foreign investors within strict limits, and widened the use of the yuan as a global currency. In addition, the China Banking Regulatory Commission was established in 2003 to take over the PBOC’s supervisory role in ensuring a safe and sound financial system.

State-owned banks have benefited from a cap on deposit rates, a large deposit base, the lack of alternatives for savers, and the politically influenced allocation of credit to SOEs. There has also been an implicit promise not to allow big state-owned banks to fail; bankruptcy has not been an option. The recent introduction of deposit insurance offers explicit protection for depositors but doesn’t solve the moral hazard problem — namely, the incentive to take more risk when the costs of failure are thrust on other people.

Banks, which dominate China’s financial sector, are subject to capital requirements, stiff reserve requirements, a high loan-to-deposit ratio, and administrative measures such as credit quotas. Thus, there is a strong incentive to create off-balance sheet entities in the shadow banking sector. Banks and non-banks now offer a variety of wealth management products designed to circumvent deposit ceilings and give individuals a higher real return on their savings than obtainable from conventional bank deposit accounts. 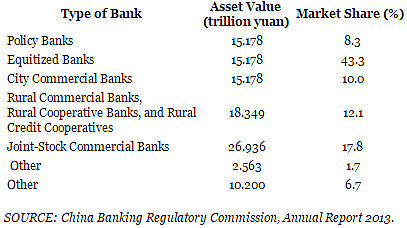 The shadow banking sector has expanded rapidly since 2010. It serves a useful function and gives private borrowers more choices. But there is a lack of transparency and a risk of fueling NPLs. The NPL risk has been compounded by the rapid growth of credit extended by the formal banking sector following the 2008 financial crisis.

Also, until recently, municipal governments could not enter the bond market and thus turned to local government financing vehicles, or LGFVs — state-owned firms that raise funds for local governments. The bulk of those funds went into property development and infrastructure. Municipal debt has mushroomed as a result and with China’s growth slowdown, there is a real danger that overinvestment in housing and industry will turn sour, further inflaming the NPL problem.

The lack of capital freedom in China and the persistence of financial repression are damaging China’s growth prospects. Without a free market in ideas, a just rule of law, and widespread private property rights China cannot rebalance its economy and achieve economic and social harmony.

Although the non-state sector accounts for the lion’s share of industrial output and employment growth, the state sector dominates banking and finance as well as energy, transportation and telecommunications. Most telling, SOEs account for only about one-third of China’s GDP but obtain about 50 percent of financial institutions’ loans to enterprises. SOEs are thus much less efficient, on average, than private firms, as measured by return on assets.

The Third Plenum of the 18th Party Congress, in November 2013, laid out the groundwork for further financial liberalization. President Xi Jinping has promised to lift the cap on deposit rates and further open capital markets. Private firms have been getting greater access to capital but are still disadvantaged relative to SOEs. A more radical reform would be to allow widespread privatization of SOEs and financial institutions.

What really needs to be done is to depoliticize investment decisions and allow capital freedom by instituting a rule of law that limits the power of the state and broadens individual choices and responsibility.

The reality is that China has a long way to go on the path toward being a global financial power. It has beautiful, modern buildings to house large banks and financial institutions, but it lacks the institutional infrastructure necessary for robust capital markets.

The challenge for China will be to learn from its own mistakes as well as those of the West in terms of creating a safe and sound financial system. In a world of pure fiat monies managed by central banks — most of whom do not follow any monetary rule — it is not surprising that regime uncertainty lies at the core of financial crises.

The CCP has a strong incentive to choose “stability” over reform, as seen in its efforts to stabilize stock markets by restricting trading and using government entities to purchase shares. There is a general lack of trust in free markets, but there is also growing distrust of big government.

A better understanding of government failure and the institutions necessary for well-functioning markets would be a good place to start in thinking about how to resolve the tension between state and market in reforming China’s financial sector. In doing so, one should not forget that free markets have lifted far more people out of poverty than central planning.

1 In 1980, Milton Friedman visited China and “advocated the widest possible use not of the market but of ‘free private markets’.” See “Using the Market for Social Development,” Cato Journal 8 (Winter 1989): https://object.cato.org/sites/cato.org/files/serials/files/cato-journal/1989/1/cj8n3-2.pdf.