If you think your candidate of the week will go all the way to the White House, can you legally call your bookie to put your money where your mouth is? Short answer, no; long answer, maybe in Iowa, but not in Las Vegas. But that can and should change. If the states play their cards right, this prohibition will fold.

Nevada Gaming Commission regulations explicitly forbid betting on the “outcome of any election for any public office both within and without the State of Nevada.” Nevada places election betting into its sports‐​betting scheme — and, as America’s gambling capital, Nevada used to have the last say. Despite a legislative push to open the books to political wagers in 2013, A.G. Burnett — Nevada Gaming Commission Chairman from 2012–2017 — didn’t think a change would beat the spread. Burnett said that “at the end of the day what we care about is two things, the state’s reputation and also, of course, patrons,” and “making sure patrons are protected and always get a fair shake when they place a wager.”

Unlike sports, where player and team statistics are known and the rules are rigidly defined, elections have a chance of being influenced by unknown forces. A particularly bad gaffe or a November surprise can throw the whole election off course, but those potentialities can be priced in. Gamblers, like voters, know their candidate may have a scandal or say something awful and can judge likelihood of that occurring and effecting the result for themselves. This knowledge will inform how they place their bets. But that was back when Nevada was the only game in town.

It’s time the U.S. officially joined the rest of the world to fully permit gambling on political outcomes.

From 1992 to 2018, the Professional and Amateur Sports Protection Act (PASPA) effectively barred any state but Nevada from legalizing gambling on sporting events or contests (a few sports lotteries were also exempted). Advocates in Nevada asked why they couldn’t add elections to their sportsbook screens, “since we can book just about everything else.” In other states, meanwhile, PASPA disincentivized building a bookmaking infrastructure at all without sports.

At least, until New Jersey bellied up to the table. The Garden State challenged PASPA’s ban in the Supreme Court with a creative application of the “anti‐​commandeering doctrine” — the idea that the feds can’t force states to enforce federal law — which had been used successfully twice in the last century. Despite those odds, New Jersey prevailed. The justices called Congress’s bluff in the 2018 case Murphy v. NCAA, leaving even more states free to pass their own sports‐​betting legislation. Many have. But they need some more vigorish to step out of Nevada’s shadow. Which is why these states should consider rolling the dice on election betting.

One major obstacle may be the Commodities Futures Trading Commission (CFTC), which treats some political gambling as a futures market. Federal law prohibits electronic transmissions of funds related to a wager on “the outcome of a contest of others, a sporting event, or a game subject to chance,” where the wager would violate applicable state and federal law. But there’s an exception for transactions regulated by the CFTC itself.

The CFTC allows political futures trading in limited circumstances. In a 1993 “no action” letter, it promised not to prosecute the Iowa Electronic Market — America’s only political gambling market, which is run for research purposes by the University of Iowa — so long as bets were limited, the scheme served a research purpose, and the management was purely academic. The CFTC granted another “no action” letter to a New Zealand university in 2014, allowing a slightly less restrictive operation called Predictit. But it prohibited a larger operation from listing political outcomes as tradable events. The CFTC so far appears to favor research applications and a lack of profitability in selecting organizations to exempt. Though maybe they would approve futures trading on future no action letter recipients.

And yet, any state looking to undercut Nevada by legalizing political gambling would face a major federalism problem. Navigating the labyrinthine federal gambling apparatus, which spans the criminal, securities, financial, and tax codes, would be no mean feat. It is unclear whether commodities regulations would preempt state legalization. But the pot is rich, and may be worth the risk. In 1916, the equivalent of $160 million changed hands on New York’s “curb exchange” — a predecessor of the American Stock Exchange. In the halcyon days before political polling, these markets — centrally located near both major party headquarters — served as real time forecasters of public sentiment. Professor David Rothschild of the University of Pennsylvania’s Wharton business school suggested that they still may be a better indicator of election results than raw polling data — though that conclusion is based on the small Iowan and European markets. But individuals with some financial skin in the game do collectively gather better information than centralized analysts. If F.A. Hayek were a betting man, he’d likely put his money down on this proposition.

Around the world, people bet on U.S. elections, the Brexit timeline, and royal baby names. The United States is mostly away from the table. Although the miasma of regulation makes it difficult to know if any federal law would trump the states, an enterprising state might see a big payout by legalizing election gambling now and fighting the feds later. States should at least pony up to see the flop. 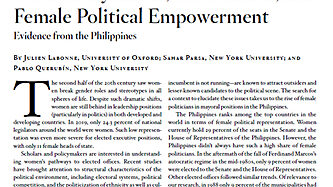 While We All Gawk at the Political Circus, Our Fiscal House Is Falling Apart

China to Become a Political Piñata in 2020 Presidential Campaign