The U.S. economy is suffering from a major long‐​term problem: business investment is weak. Unless President Trump solves this problem, it will prove to be his Achilles’ heel.

As the accompanying chart shows, net private domestic business investment (gross investment — capital consumption) is relatively weak and has been on a downward course since 2000. Indeed, ever since the Dot-Com bubble burst, private investment has been in the tank. Neither the policies of the George W. Bush nor Barack Obama offered an elixir. Investors turned their collective thumbs down on both presidents. 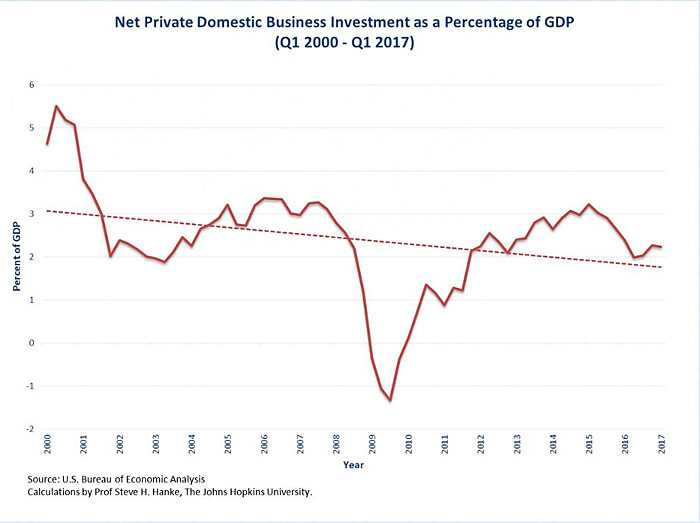 So, just why is private investment so important? It is what fuels productivity. With little fuel, we should expect weak productivity numbers in the U.S. Sure enough, as shown in the accompanying chart, the rate of growth in productivity is weak and has been trending downward. The U.S. is in the grips of the longest slide in productivity growth since the late 1970s. This is alarming because productivity is a key ingredient in determining wages, prices and economic output. 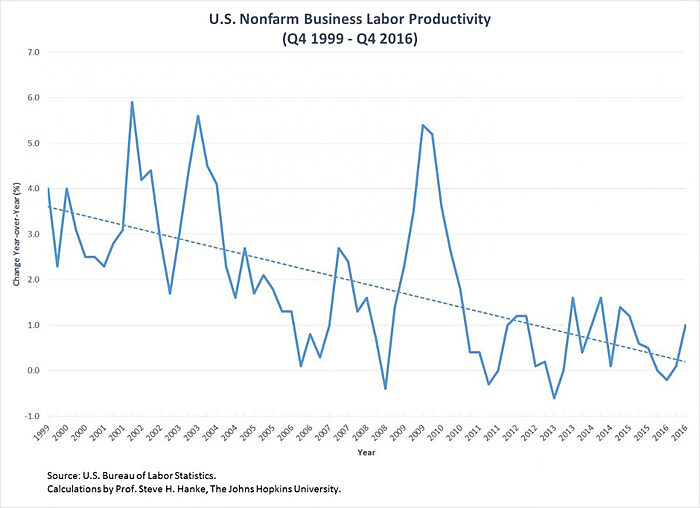 When we take a look at aggregate demand in the economy, which is measured by final sales to domestic purchasers, it is clear that the U.S. is in the midst of a growth recession. Aggregate demand, measured in nominal terms, is growing (4.32%), but it is growing below its trend rate of 4.70%. As the chart below shows, the below-trend growth in nominal aggregate demand has characterized the U.S. economy for a decade. To put this weak growth into context, there has only been one post-recession recovery since 1870 as weak as the current one: the one following the Great Depression. 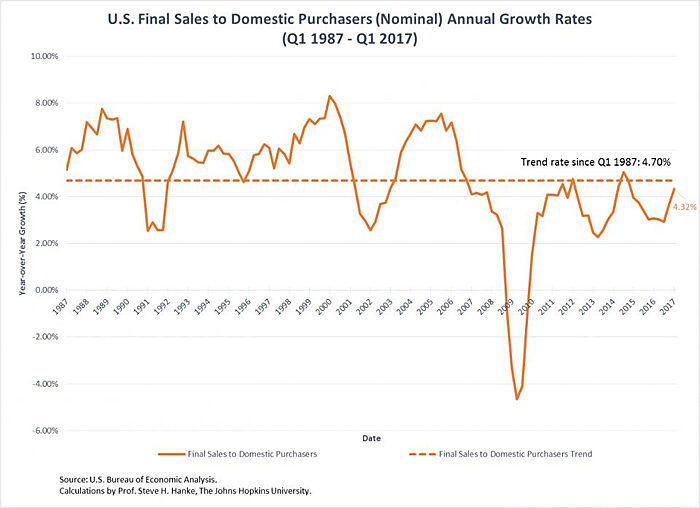 Will President Trump be able channel Harry Houdini and extricate the U.S. from its private investment drought? He just might. If Trump can stay focused on developing supply-side tax reforms and deregulation initiatives, he might alter what has been an ugly private investment environment. If not, private investment will continue to be a drag on the U.S. economy, and his economic legacy.

Where Is Trump’s Alleged Isolationism?