The Supreme Court is about to hear a case challenging the legality of the latest version of President Trump’s travel ban policy, which bars citizens of six Muslim‐​majority nations from entering the United States.

In virtually any other context, courts would likely rule that a law or executive order so clearly motivated by religious discrimination violates the First Amendment, which protects religious freedom and forbids the “establishment” of religion.

Immigration policy cannot violate the First Amendment by discriminating against Muslims, or adherents of any other religion.

Trump has repeatedly stated that his order is intended to target Muslims. As a candidate, he advocated a “total and complete shutdown of Muslims entering the United States.”

When he switched to a “territorial” approach targeting citizens of Muslim-majority nations, he called it an “expansion” of his earlier strategy, and repeatedly equated the two.

Courts promptly struck down Trump’s first travel ban order. They also struck down his second order, which he called an “expansion” of his earlier proposal. Travel Ban 3.0 is a direct outgrowth of its two predecessors. Indeed, it is even worse, because it is permanent instead of lasting for only 90 days.

The president’s defenders can no longer claim that the policy is a just a temporary measure needed to give time to review vetting procedures.

The inclusion of North Korea and Venezuela in Travel Ban 3.0 does not change its anti-Muslim focus. Almost no North Koreans enter the U.S., and the Venezuela exclusion applies only to a few government officials and their families.

By contrast, the travel ban has barred thousands of people from the six Muslim-majority nations who would otherwise enter the U.S., keeping many from pursuing the American dream as immigrants, studying at American universities or seeing family members in the United States.

Neither does it matter that the travel ban does not cover all the Muslims in the world. What matters is that the vast majority of those excluded are Muslim, and they have been barred precisely because of their religion.

An employer who repeatedly announced he wanted to avoid hiring African-Americans could not make his policies legal by targeting applicants who live in majority-black neighborhoods, even though such a rule would not excludeall blacks and would bar some whites. 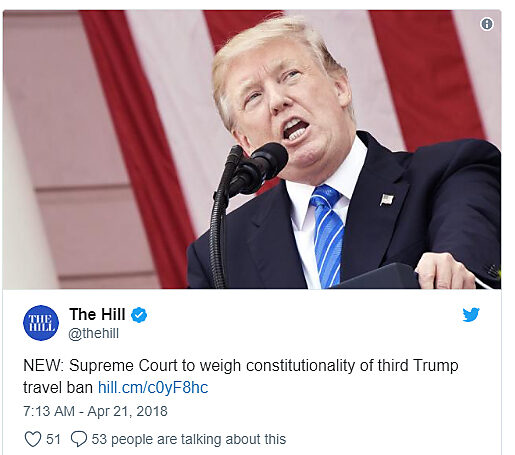 The First Amendment states that “Congress shall make no law respecting an establishment of religion, or prohibiting the free exercise thereof.” Nothing here suggests that the First Amendment is limited to government actions within the United States or those targeting American citizens.

To the contrary, the amendment is a categorical limitation on federal power. “No law” means just that.

The text is reinforced by Founding Fathers-era practice. The Founding generation routinely applied the Bill of Rights as a constraint on U.S. government actions abroad, including those directed at non-citizens.

For example, it was taken for granted that suspected pirates captured at sea, whether U.S. citizens or not, were entitled to the “due process of law” guaranteed by the Fifth Amendment. Peaceful migrants surely deserve at least the same consideration as pirates.

Some argue that immigration policy is exempt from the Bill of Rights because the Supreme Court has ruled that Congress has “plenary” power over this field. But courts routinely apply the Bill of Rights to limit other federal powers, no matter how “plenary.”

Congress has long been understood to have plenary power to regulate interstate commerce, as the court ruled in 1824. Yet, no one claims the federal government can ban interstate trade carried on by Baptists or Jews.

Many believe that federal power to ignore the Bill of Rights in immigration policy is established by Supreme Court precedent. But such claims are greatly overblown.

In nearly all the relevant cases cited by the administration, either the Supreme Court applied the same constitutional standards as were used in other contexts at the time, or the plaintiffs failed to challenge the constitutionality of the laws in question.

In one key 1952 case, for example, the Supreme Court ruled that a non-citizen could be deported for being a member of the Communist Party. But the year before, it also ruled that even American citizens could be imprisoned for being members of the party.

At that time, the Supreme Court’s badly flawed interpretation of the First Amendment denied virtually all protection to communists.

If the justices make clear that the Bill of Rights limits federal power over immigration, the federal government could still choose among potential immigrants based on factors such as job skills and education.

But immigration policy cannot violate the First Amendment by discriminating against Muslims, or adherents of any other religion.