While this spike caught most observers off balance, it didn’t surprise me. Each day, I accurately measure Argentina’s inflation using high-frequency data and Purchasing Power Parity theory. By my measure, Argentina’s annual inflation rate is 100%/yr (see the accompanying chart). That’s nearly double the official rate reported for the end of February. 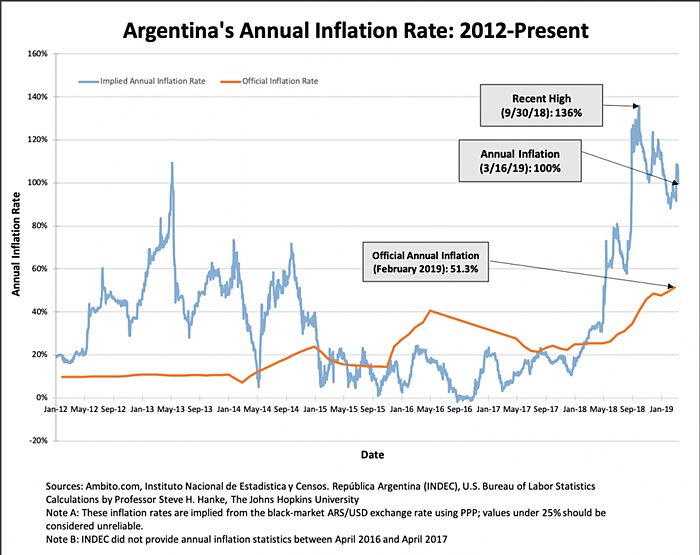 In response to Argentina’s inflation surge, the Banco Central de la República Argentina (BCRA) did what all central banks with no credibility and junk currencies do. It jacked up interest rates in an attempt to keep the peso from plunging and generating more inflation.

The lesson from this is clear: Argentina’s 22nd program with the International Monetary Fund (IMF) is not working. As they often do, the IMF Doctors have prescribed the wrong medicine. To hold the managed pegged peso exchange rate, which is a fatally flawed exchange rate regime with no credibility, the BCRA has to impose sky-high interest rates. With these rates, the economy will collapse, and the peso will eventually follow. 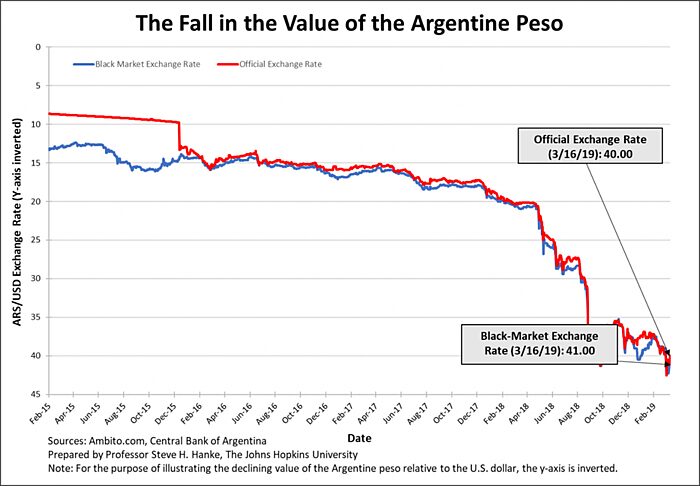 When I reflect on the peso, there are plenty of additional lessons. Let’s turn back the clock. Argentina’s monetary system from April 1, 1991 to January 6, 2002 was known locally as Convertibility. It was an unusual name for an unusual system. The Convertibility System was not a currency board. Rather, it was a currency-board-like system: a mixture of currency board and central banking features.

As early as October 1991, while writing in the Wall Street Journal, I predicted that Convertibility would eventually behave more like a typical central bank, and that it would be engulfed in a currency crisis. Well, that sad day arrived in 1999. And, eventually, the Convertibility System, in which the peso was linked to the U.S. dollar, was abandoned on January 6, 2002.

Many people asserted that the crux of the Argentine crisis was an overvalued peso. Supposedly, the peso’s link to the strong U.S. dollar made the peso overvalued, rendered Argentina uncompetitive, caused the economy to slump, and forced the government to default.

Does the story withstand scrutiny? A classic sign of uncompetitiveness caused by an overvalued currency is declining exports. But, Argentina’s exports increased every year in the decade of the 1990s except in 1999, when Brazil, its largest trading partner, suffered a currency crisis. Exports during the first 11 months of 2001 were about 3.2% ahead of exports during the same period in 2000. Considering that estimated real growth in world trade was only 0.9% in 2001, Argentina’s export performance was relatively strong. Indeed, the export sector was one of the few bright spots in the Argentine economy. If the rest of the economy had been growing as fast as the export sector during 2000-01, Argentina would not have been swallowed by a recession.

In an attempt to bolster claims of a peso overvaluation, some observers asserted, on the basis of taxi rides from the airport or other casual impressions, that prices were high in Buenos Aires, and that high prices were evidence the peso was significantly overvalued against the dollar. But, a Union Bank of Switzerland survey of prices in 58 of the world’s largest cities at that time found that for a basket of 111 goods and services, weighted by typical consumer habits – including three categories of house rent – Buenos Aires ranked 22nd, about midway between the most expensive city, Tokyo, and the least expensive, Mumbai (Bombay). The survey also found those taxi rides that were allegedly so expensive cost about 8% less than the rides in Rio de Janeiro did at the time.

There were other indicators that contradicted the peso overvaluation story. For example, the Economist magazine’s Big Mac Index indicated that the peso, before its devaluation, was 2% undervalued. And, although the Big Mac Index, as well as more sophisticated estimates of equilibrium exchange rates, should be treated with skepticism, a careful study of the matter using data from 1993 to 1999 indicated that the peso was always within 6% of its so-called fundamental equilibrium real exchange rate.

So, a second lesson derived from the Argentine peso is that one should look carefully at the evidence before jumping to conclusions about overvaluation (or undervaluation).

When it comes to the peso, my School Boy’s Theory of History applies: it’s just one damn thing after another. Perhaps it’s time to dump the peso and replace it with the Greenback?