As I write, there have been dozens of deaths from the COVID-19 pandemic in the United States. That number will rise, because our bodies have no immunity to this novel coronavirus, and modern medicine so far has neither a vaccine against it nor a cure for it. But it would have to rise quite a bit to surpass the 130 deaths that occur in the United States each day from opioid overdoses. Even in China, the daily death toll from coronavirus exceeded 130 for just four days, peaking at 150 deaths before declining to well below 50 per day.

Unlike COVID-19, however, there is already both a medical solution to opioid overdoses and a service‐​industry innovation that prevents the transmission of infectious diseases among intravenous opioid users. The solution is to create more safe injection sites.

Safe injection sites are clinics where police agree not to arrest drug users, and where medical professionals prevent users either from overdosing or transmitting deadly diseases. Medical staff give clients clean needles and educate them on how to avoid infections. They prevent overdoses by testing the impure drugs clients purchase on the street for fentanyl, a leading cause of overdose deaths, and other substances. If an overdose occurs, they administer the life‐​saving drug naloxone, which reverses opioid overdoses. Safe injection sites monitor drug users in the same way hospitals monitor patients.

Opioid mortality rates are unparalleled among drug‐​related deaths. Cocaine, hallucinogens, and MDMA (ecstasy) all have greater lifetime consumption rates than opioids, yet the number of opioid‐​related deaths is greater than the number of overdose deaths for all other illicit drugs combined. Opioids kill more than 48,000 Americans per year, accounting for 70 percent of all drug‐​overdose deaths. In 2017, the lifetime odds of dying from an opioid overdose had grown to the point where they surpassed the odds of dying in a motor vehicle crash.

Overdoses, however, are only one part of this health crisis. Users often consume intravenous drugs in alleys and rundown buildings, with used needles and dirty water. Such conditions lead to transmission of HIV, hepatitis and other blood‐​borne diseases, and leave users vulnerable to theft, assault and rape.

A non‐​profit organization in Philadelphia raised funds to build and operate the first legal safe injection site in the United States. If it yields results similar to safe injection sites in other countries, other cities could follow suit.

Critics fear that making drug use safer would lead more people to use drugs. But the current strategy of banishing drug users to alleys is a death sentence for tens of thousands of Americans each year who take unsafe drugs in unsafe conditions. Addicts are hurting enough. Our approach should not be to make their lives worse. And while everyone wants to help free addicts from their addiction, reducing opioid‐​related deaths is more important than reducing opioid use.

Simply put, there is a strong case for safe injection sites, and not only from a libertarian perspective. Allowing them would reduce violence against drug users by both the police and criminals. But they don’t necessarily even need taxpayer funds. The Philly group is funding that SIS with private contributions. All the government needs to do is get out of the way.

Taxpayers could also see offsetting savings. A Canadian study found that after one city opened a safe injection site, ambulance calls for treating overdoses in that city decreased by 67 percent. We need similar savings in the U.S. The White House’s Council of Economic Advisors estimates that from 2015 to 2018, the social costs of opioid addiction—including spending on health care and the criminal justice system, plus lost productivity—totaled more than $2.5 trillion. From 2017 to 2018, opioid‐​involved overdoses accounted for 430,000 visits to emergency departments, inpatient care, and other hospital care settings. Annual hospital costs attributed to opioid overdoses amount to $1.94 billion. Some 80 percent of these patients are in taxpayer‐​financed health programs.

The root cause of this health crisis is the War on Drugs. It ruins lives with harsh and unnecessary prison sentences. It treats addicts who need help like criminals, with predictable and tragic results. 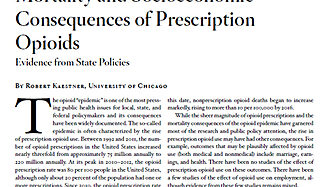