Charter schools are the object of intense national debate. They shouldn’t be. The data show that public charters are a good investment. 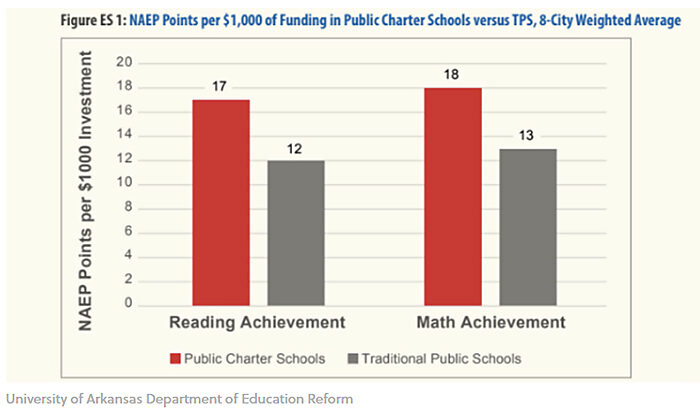 In five studies that we’ve conducted during the past several years, we’ve compared traditional schools and charter schools in a diverse roster of U.S. cities where a substantial portion of families are choosing charters. We’ve examined how much funding each sector receives and how much learning each produces. The facts are quite clear:

Charter schools do more with less.

Our first report, “Charter School Funding: Inequity in the City,” identified a significant funding gap between traditional and chartered public schools. In 14 cities spanning the country, from the nation’s capital to Memphis to Los Angeles, charter schools received considerably less funding — an average of $5,721 per pupil — than traditional schools. To put it another way, families sacrificed about one third of their educational resources when they chose to enroll in charter schools. 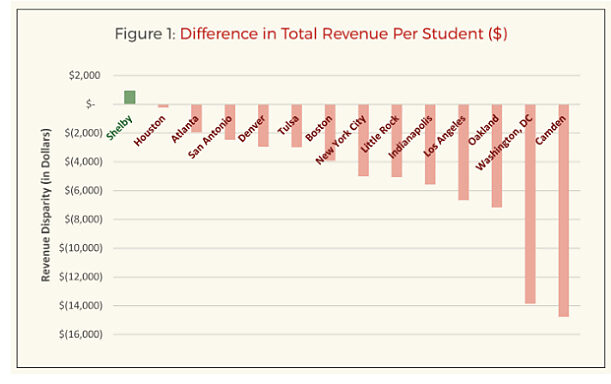 Two years later we revisited these same 14 cities and found that the funding gap between traditional and charter schools had increased slightly to an average of $5,828 per pupil. Local funding sources, including property and sales taxes, were the biggest contributors to the disparity. (A third report that focused on New York City's charter and traditional schools yielded similar findings.)

At the same time, we wanted to factor in academic achievement. In 2018 we completed a study measuring the cost-effectiveness — the amount of learning per educational dollars spent — of charter and traditional schools. To determine academic performance, we used results from the National Assessment of Educational Progress and the Center for Research on Education Outcomes at Stanford University.

For that study, we focused on eight cities that, despite their different sizes and demographics, all have substantial charter sectors: Atlanta, Boston, Denver, Houston, Indianapolis, New York City, San Antonio, and Washington, D.C. In each city, we found that charter schools were more academically cost-effective than traditional schools. 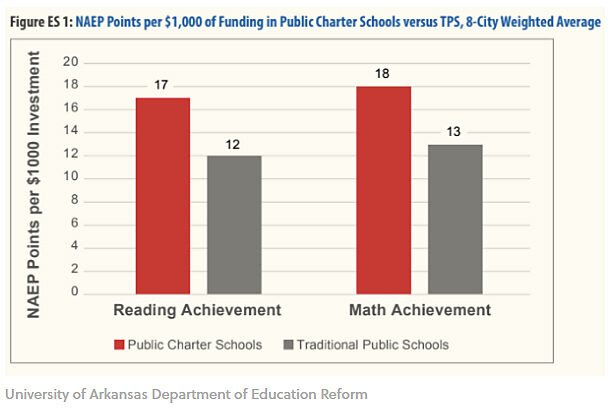 We also measured the taxpayer return-on-investment generated by each sector. Our most recent report found that charters’ ROI exceeds that of traditional public schools by an average of 53 percent over the course of a 13-year investment in a K-12 education. 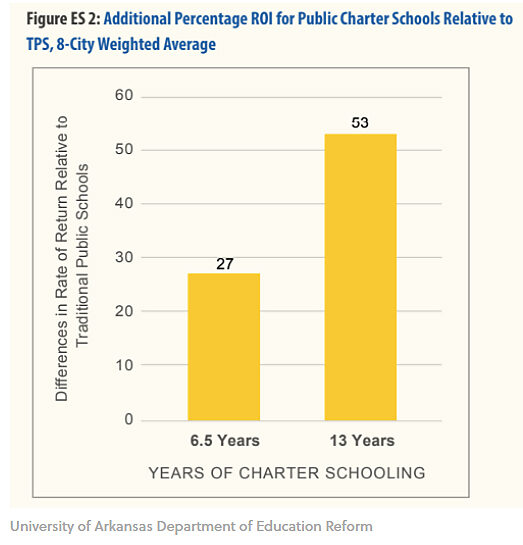 While our research demonstrates that charters do more with less, it also begs the question: should charters get stuck with less funding in the first place?

Presuming that policymakers believe in the principle of equity, they should fix the funding structures that currently grant substantially fewer resources to charter schools. They should allocate education dollars in a way that ensures a given public school student receives the same amount of resources whether they choose to enroll in a charter or traditional school.

To boost academic performance across the public education system, policymakers should examine why charter schools, despite receiving less funding, yield greater academic achievement than traditional schools. What are charters doing differently? Several researchers, including Philip Gleason of Mathematica Policy Research and Mark Berends of the University of Notre Dame, as well as report c0-author Patrick Wolf, have conducted initial studies of charter school best practices. That vital line of research should be broadened and deepened.

In light of the evidence, these are the questions that policymakers should ask. The sooner policymakers can answer them, the sooner they can figure out how charter schools can best achieve one of their original promises — to stimulate improvements in all public schools.