The recent killings of 49 innocent club goers in Orlando, Florida, have raised, once again, the issues of tolerance and violence in American society. Yet, even as we mourn the victims of hatred and violence, it is worthwhile to remind ourselves that, historically speaking, Americans live in very safe and tolerant times.

Let us start with public safety. As Harvard University psychologist Steven Pinker documented in his 2011 book The Better Angels of Our Nature, violence has been declining for centuries. In 1450, for example, Italian homicides averaged 73 per 100,000 people. England was relatively safe, with just over 13 homicides per 100,000 people. 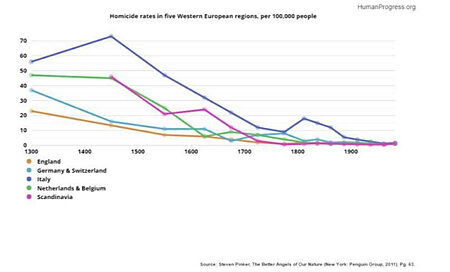 In 2011, in contrast, homicides in Great Britain and the United States averaged 1 and 4 per 100,000 people respectively.  While America's overall homicide rate remains higher than that in Great Britain, there is enormous regional divergence. In 2015, for example, the homicide rate in New England's Massachusetts was 1.61 per 100,000, but it was 11.67 in the Deep South's Louisiana. 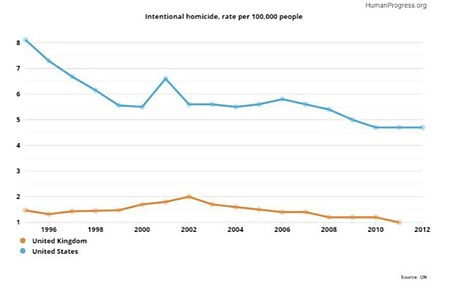 Overall, the homicide trend in America has been positive – mass shootings notwithstanding. Between June 18, 2015, when a suspected white supremacist killed 9 people in a historically black church in Charleston, South Carolina, and June 12, 2016, when a suspected Islamic extremist killed 49 people in a gay club in Orlando, Florida, 89 Americans died in mass shootings in the United States.

The population of the United States is approaching 324 million, which made the likelihood of dying in a mass shooting over the last 12 months 1 in 3.6 million. According to the National Weather Service, a U.S. government agency, the likelihood of being struck by lightning in 2014 was 1 in 1.2 million, by comparison. Such statistics are of no comfort to those who died and to their families, but they do put the evolution of violence in America in proper context.

Similarly encouraging patterns can be observed in American attitudes toward minorities, including blacks and gays. For example, even after the Civil War ended the institution of slavery, the lynching of black Americans continued in the Jim Crow south. Lynching plummeted rapidly over the following decades and disappeared completely mid-way through the 20th century. 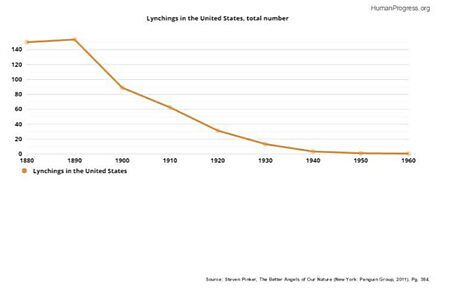 In 1942, 68 percent of white Americans thought that blacks and whites should go toseparate schools. By 1995, only 4 percent of American whites thought that. In 1958, 45 percent of white Americans said that they would “maybe” or “definitely” move if a black family moved in next door. That number fell to just 2 percent in 1997. So rare were segregationist attitudes by the mid-1990s that the federal government discontinued collection of such statistics. 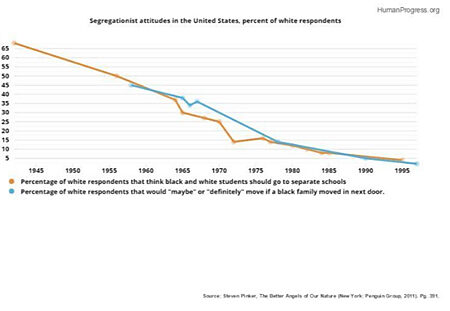 A higher level of segregationist attitudes in the United States was noted by the 2014 World Values Survey. The survey found that 6 percent of Americans were opposed to racially different neighbors. This number, however, includes not only whites opposed to black neighbors, but also blacks opposed to white neighbors, etc. 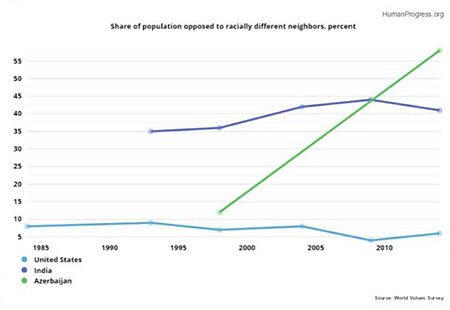 On the opposite side of the spectrum was Azerbaijan, where 58 percent of the population was against racially different neighbors. Azerbaijan was followed by Libya with 55 percent, the Palestinian Authority with 44 percent, India with 41 percent, and Thailand with 40 percent.

When it comes to homosexuality, trends are similarly encouraging. If anything, toleration toward gays and lesbians has been increasing at a dramatic pace. In 1977, only 13 percent of Americans believed that homosexuality was innate. By 2015, 51 percent Americans recognized the importance of genetics in determining a person's sexual orientation. 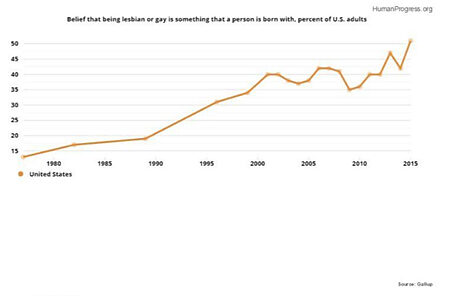 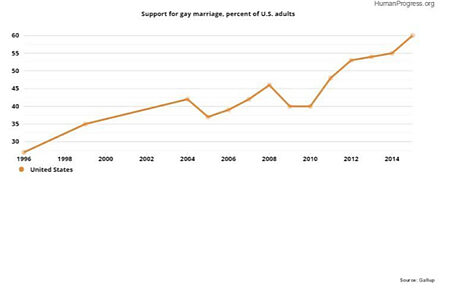 Over the last year, we have heard much about the intrinsic racism and homophobiain American society. I disagree. By historical and by global standards, America is a remarkably tolerant and safe place, a few deranged or evil individuals, such as the shooters in Charleston and Orlando, notwithstanding.

Moving forward, it is important to recognize a few immutable realities. First, complete physical safety and emotional serenity are impossible in a free society. Second, deranged or evil individuals, who are determined to kill innocent people, cannot be stopped by new laws and regulations or by the evolution of social and cultural norms. Third, law enforcement, no matter how quick and brave, cannot prevent some, perhaps most, casualties. In extremis, all citizens must look to their own devices to protect themselves and their loved ones from the predation of those whom law and social norms have not or could not stop.