This coming Sunday will mark the 50th anniversary of the U.S. Supreme Court ruling in Tinker v. Des Moines, which famously intoned that public school students and teachers don’t “shed their constitutional rights to freedom of speech or expression at the schoolhouse gate.” Some may hear about the celebrated ruling and think it ended any notion that public school officials can fetter expression. But as the Cato Institute’s Public Schooling Battle Map illustrates, it did not. Student and teacher expression is frequently curbed, and often for understandable reasons.

Within the Tinker ruling, the irresolvable conflict in public schooling is laid bare: government must not curb free expression—see the First Amendment—but public schools, which are government institutions, sometimes must fetter speech to effectively educate. For instance, the Court wrote, “Clearly, the prohibition of expression…at least without evidence that it is necessary to avoid material and substantial interference with schoolwork or discipline [emphasis added], is not constitutionally permissible.” 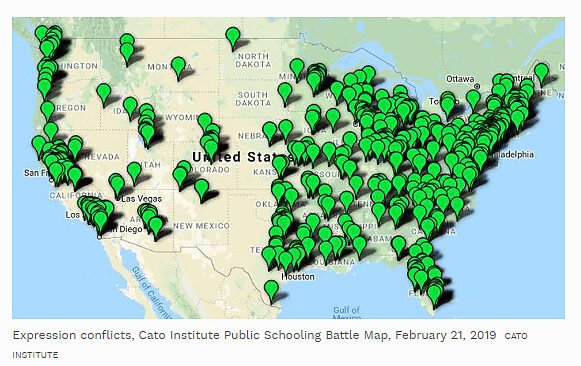 As the Battle Map, an interactive database of values- and identity-based conflicts in public schools reveals, the need to maintain order is just one concern among many that has spurred public school officials to restrain speech. Administrators have also curbed expression they feared would render a school inhospitable, even threatening, to students from minority groups. They have spiked articles in student newspapers they thought were unfair to their subjects. They have punished speech by teachers that appeared to be political pronouncements. And the list goes on.

Many—perhaps most—peoples' sympathies likely lie with students and teachers more than school officials. Hopefully everyone's first reaction is that government must not censor speech. But these other concerns—disruption, marginalization, captive political speech—are also utterly understandable worries. For instance, as Justice Black wrote in his dissent, the armbands that the Tinker students donned to protest the war in Vietnam really did disrupt education:

[Students’] armbands caused comments, warnings by other students, the poking of fun at them, and a warning by an older football player that other nonprotesting students had better let them alone. There is also evidence that a teacher of mathematics had his lesson period practically “wrecked,” chiefly by disputes with Mary Beth Tinker, who wore her armband for her “demonstration.” Even a casual reading of the record shows that this armband did divert students’ minds from their regular lessons, and that talk, comments, etc., made John Tinker “self‐​conscious” in attending school with his armband…the record overwhelmingly shows that the armbands did exactly what the elected school officials and principals foresaw they would, that is, took the students’ minds off their classwork and diverted them to thoughts about the highly emotional subject of the Vietnam war.

The reality is that equally good people can—and do—disagree about how to balance student expression with all of the other competing goods involved in education. That is why 50 years after Tinker, battles over expression remain pervasive. It is also a major reason we need to move to a system of private school choice. We must not let government—which ultimately enforces its rules at the point of a gun—decide what speech is or is not acceptable. With private school choice, government is no longer in the position that it must do that, and no educator or family is forced under policies they cannot accept. Private school choice, in crucial distinction to public schooling, let’s people freely pursue what they think is most important in education.