From April 11 to June 14, the Cato Institute hosted its first art exhibit, Freedom: Art as the Messenger. Under the supervision of co‐​curators Harriet Lesser and June Linowitz, the goals of this exhibition were to promote freedom of speech and expression and to highlight the intertwined relationship between art and freedom. By bringing together diverse groups of people to exchange various interpretations of freedom, Cato sought to reach new audiences and to inform the public about the Institute and its mission. 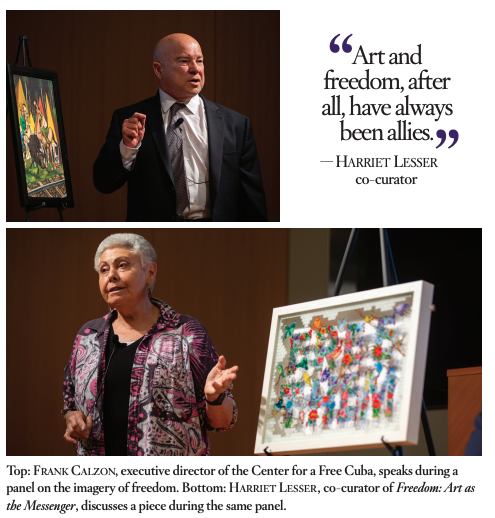 Cato called on artists across the country to submit pieces that represent their idea of freedom. The call for entries ultimately accumulated more than 2,000 pieces from 500 artists in 40 states — a much higher number of submissions than was originally anticipated. The submissions were considered through a blind jury process and judged on their aesthetic value, mastery of craft, and relevance to the exhibition theme. After careful evaluation, Lesser and Linowitz selected 90 pieces from 76 artists for display in the exhibit. The included works can be viewed online at cato​.org/​a​r​t​m​e​s​s​enger.

The pieces selected for the exhibit were a variety of media, including paintings, photographs, videos, and sculptures. The artists were encouraged to manifest their conception of freedom in any way they saw fit. As such, the pieces expressed a spectrum of interpretations, including political views other than small‐​government libertarianism.

As part of Freedom: Art as the Messenger, Cato also hosted three panel discussions on how art can bridge barriers, the subjective definitions of offensiveness and how this debate relates to freedom of speech through art, and the imagery of freedom as used in art.

Many visitors explored the art exhibit before, during, and after other Cato events, but the events held as part of the exhibit drew nearly 1,300 people — including many who had never visited the Institute before. Media outlets took notice, too, with coverage in the Washingtonian and the Washington Post. The latter noted, “As is customary at Cato, nearly everyone who stopped in for the show was offered a copy of the Constitution.” The left‐​wing magazine The Baffler devoted 4,000 words to the exhibit. After much huffing about “tobacco,” “laissez faire capitalism,” and “Christian bakers,” the essayist concluded with an interview with a young artist from Kentucky whose charcoal drawing won the top prize: “He had been completely unaware of Cato and unfamiliar with its politics, but after his work was accepted, he began to do research and liked what he saw. Now he thinks he’s probably a libertarian after all.”