Cato senior fellow Randal O’Toole is a man who loves trains — in fact, he says, “Few people can say they love passenger trains more than I do.” He still thrills at the memory of his first ride on a train, at five years old. And he still treasures the model trains — custom painted by his father to match his favorite railroad — that he received for Christmas in his youth. He has spent hours volunteering to lovingly restore a vintage train. He collects train memorabilia: dining car china, old brochures, sleeping car blankets. He even met his wife on a cross‐​country train trip.

All of that makes O’Toole an unlikely candidate for one of the nation’s most vigorous critics of passenger rail. In fact, O’Toole was once an ardent supporter of increased funding for Amtrak and government‐​funded trains. And yet — as his new book Romance of the Rails explains — despite his enduring love for the elegance and nostalgia of train travel, he has since become “completely disillusioned” with the idea of government‐​subsidized train travel and has come to realize that, as majestic as trains can be, they have little place in the future of mass transit. His book, therefore, is a “love letter to a dying friend,” a comprehensive history of how train travel came to be, why it once worked so well, and why it doesn’t work anymore. 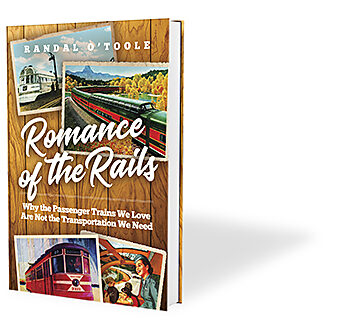 In city after city, the numbers prove that passenger rail is no longer the best method of transportation for most commuters; new technology, including cheap air travel and ride‐​sharing, has replaced trains just as trains once replaced steamboats and horse‐​drawn carriages. Nevertheless, local governments continue to pursue doomed forays into subsidized rail, like Nashville’s commuter transit project, the Music City Star, whose higher‐​than‐​expected operating costs and lower‐​than‐​expected revenues have left the city with staggering deficits. By 2016, the total subsidy was more than $28 per ride, so that someone who rode the train to and from work 250 days a year would cost taxpayers more than $14,000. “This means it would have cost less to buy every daily round‐​trip rider a new Toyota Prius, not just once but every other year for the expected life of the train,” O’Toole writes.

O’Toole tackles and debunks all the common refrains of rail enthusiasts, such as, “Why can’t America just have great train systems like Europe?” The answer: in reality, Europe’s trains are plagued by the same problems as American trains. In Italy, for example, economists have dubbed the country’s high‐​speed rail system “devastating” to the national budget, with dismal ridership numbers. France has built 1,640 miles of high‐​speed train lines since 1981. But by 2013, France’s rail programs were more than $50 billion in debt, and they have continued to lose money while only 10 to 15 percent of French residents regularly use high‐​speed rail. The United Kingdom has one of the most financially successful train systems, but only thanks to a privatization program that has increased rail passenger miles in the U.K. faster than in any other European nation.

Even in the golden age of trains, O’Toole notes, train transit was an elite, glamorous activity; it has never made much sense as a subsidized travel solution for the masses. The truth is that the romantic fantasy of high‐​speed rail lines that whisk all Americans to work every day is just that — a fantasy. “I still love passenger trains,” O’Toole writes, “but I don’t think other people should have to subsidize my hobby.”

Purchase Romance of the Rails at cato​.org/​store and bookstores nationwide.