Philosophers, government officials, and citizens have argued for thousands of years over the question of how children should be raised. In ancient Sparta, children were given over wholly to the state — an approach Aristotle would later praise, asserting that citizens belong not to themselves, but to the state, in service of the common good. While few today would take such an extreme view of children’s subservience to the state, many still believe that education is a fundamentally public concern and that parents are not adequate judges of what their children should study. 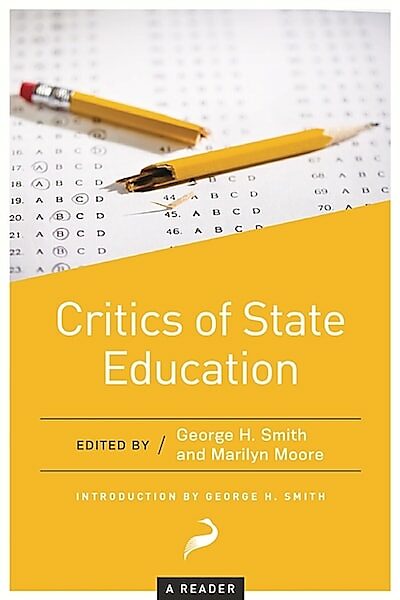 In Critics of State Education: A Reader, the second book in Libertarianism.org’s Reader series, editors George H. Smith and Marilyn Moore have compiled noteworthy critiques of state education from a variety of writers. As Smith explains in the introduction, many of these writers belonged to a British classical liberal movement known as Voluntaryism. They “launched a sustained campaign against state education in England that, though it was doomed to failure, produced a remarkable body of literature that has been largely ignored by historians.” Some of their writings are reprinted in this collection for the first time since their original publication.

The Voluntaryists believed that the government must always preserve individual liberty and that liberty in children’s education was no exception. They therefore upheld freedom in education as a civil liberty, arguing that it was key to preserving all the other essential aspects of liberty, including religious freedom and freedom of speech. “We cannot violate the principles of liberty in regard to education, without furnishing at once a precedent and an inducement to violate them in regard to other matters,” wrote Sir Edward Baines in 1846.

They worried, much like critics of public education today, that states would impose the wrong values in children and use their schools for nefarious ends, including indoctrinating children to thoughtlessly trust the state. One writer, for example, warned that government education would produce “an emasculated and servile generation,” and argued that ensuring some type of education for all, even if a noble goal, was not worth the price of man’s free spirit.

Herbert Spencer, meanwhile, critiqued the argument that schooling should be uniform for all children and that without government imposing these uniform standards, ordinary people would not be able to choose the correct studies for their children. He denounced the assumption that the state would be more invested in a child’s welfare than that child’s own parents, and he argued that a top-down education system would be resistant to reforms and new ways of doing things, which would defy “the grand and irresistible law of human existence” — continuous progress. These arguments echo the fights that play out in public schools today, as exasperated teachers are held back from innovating in their classrooms, bound by the slow-to-change state to adhere to outdated teaching methods and curricula. As Alfred Edgmont Hake and O. E. Wesslau wrote, “Nothing is more difficult to give than a good education, and the State is wholly incompetent to give it.”

From well-known authors such as Spencer to more obscure names like Edward Miall, Critics of State Education’s curation of texts provides an essential introduction to some of the most provocative and thoughtful arguments against state education ever written. Although England may have ignored their warnings several centuries ago, the Voluntaryists’ arguments remain as timely and instructive as ever today.