The 2019 edition of Economic Freedom of the World, a joint project of the Cato Institute and the Fraser Institute, has been released with good news for the United States, which rose from sixth to fifth place. 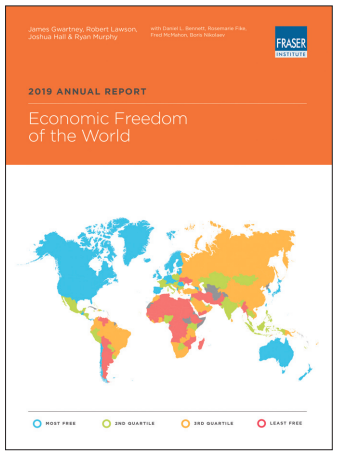 As the authors explain, “The cornerstones of economic freedom are personal choice, voluntary exchange, freedom to enter markets and compete, and security of the person and privately owned property.” Forty‐​two data points are used to construct a summary index and to measure the degree of economic freedom in five broad areas, which are then used to produce a score for each nation on a scale of 1 to 10.

Hong Kong and Singapore retain the top two positions, with a score of 8.91 and 8.71, respectively. The rest of this year’s top scoring countries are New Zealand, Switzerland, the United States, Ireland, the United Kingdom, Canada, Australia, and Mauritius.

The United States returns to the top five after having ranked in 12th place as recently as 2014. The rankings of other large economies in this year’s index include Japan (17th), Germany (20th), Italy (46th), France (50th), Mexico (76th), India (79th), Russia (85th), China (113th), and Brazil (120th). The 10 lowest‐​rated countries are Iraq, the Republic of Congo, Egypt, Syria, the Democratic Republic of Congo, Angola, Algeria, Sudan, Libya, and lastly, Venezuela. (Insufficient data was available to score North Korea, along with a handful of war‐​torn countries including Afghanistan and Somalia).

The first Economic Freedom of the World report, published in 1996, was the result of a decade of research by a team that included several Nobel laureates and more than 60 leading scholars in a broad range of fields, including economics, political science, law, and philosophy. This years report is the 23rd edition of Economic Freedom of the World; it ranks 162 countries and territories for 2017, the most recent year for which data are available. This years report was written by James Gwartney, Robert Lawson, Joshua Hall, and Ryan Murphy, with Daniel L. Bennett, Rosemarie Fike, Fred McMahon, and Boris Nikolaev.

The report not only examines the current trends in global economic freedom, but also uses historical data to compile rankings for nations through the 1950s and 1960s. This enables new historical comparisons to be made and expands the horizon of correlations that can be found between economic freedom and human well‐​being throughout the mid‐​20th century.