Most people, and many economists, take for granted that the status quo of the Federal Reserve is the best possible arrangement, that the way to prevent financial crises is through more regulation, and that alternative currency systems are wild and unscientific ideas. But in reality, these popular notions are the result of the fact that these same people, including economists, know too little about monetary history. In a new book, Cato’s George Selgin, whom James Grant of Grant’s Interest Rate Observer has deemed “the best monetary thinker in Washington, D.C.,” combats that ignorance with a sweeping review of monetary history that turns these misguided popular notions on their heads.

Money: Free and Unfree is a collection of essays that represent several decades of research. This research delves back into pre–Civil War history to find the true root of U.S. financial woes: the government’s unnecessary interventions into the monetary system, which disrupted successful private-sector arrangements. Selgin details how the Civil War prompted the indebted federal government to ramp up its involvement in the banking and currency system, limiting commercial banks’ ability to issue their own bank notes and tying currency to the government’s debt. This in turn launched the country into some of its first financial crises.

He goes on to review how an early 20th-century push to halt future crises culminated in the creation of the Federal Reserve. The National Monetary Commission was set up to investigate the best means of preventing financial crises. But instead, the Commission ended up as a “Trojan horse,” as Selgin puts it, for Wall Street’s self-serving schemes. The Commission’s chairman, Sen. Nelson Aldrich (R-RI), was a notorious partisan with close ties to Wall Street, and he wielded his new power to pursue Wall Street’s preferred plan: a central bank, which could protect and shield them from failure, all the while denying that they were creating a centralized system in the first place. Selgin exposes the propaganda that the Fed has engaged in to obscure its true functions, and the many ways in which it has failed to perform its duties.

Most importantly, Selgin undermines, chapter by chapter, the false claim that our current monetary system is inevitable and that no viable alternative structures exist. Alternatives he discusses include a monetary rule, the gold standard, and rule-bound fiat standards. In a final essay, he makes the case for streamlining the Federal Reserve’s operating system in order to help it better deal with financial crises. Although he deems his suggestions here merely “palliative,” and ultimately advises more radical reforms, there are still more immediate steps we can take to remedy our current less-than-ideal situation.

Selgin’s work is indispensable reading for understanding not only why the status quo of monetary thinking is wrong, but also why economists got things so wrong in the first place — the forgotten history of our monetary system. 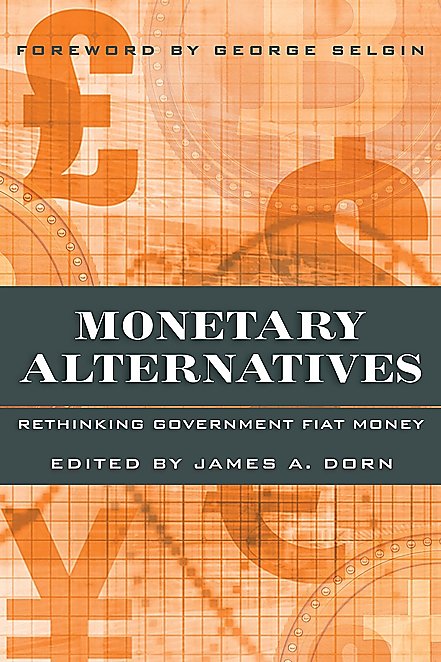 Despite widespread ignorance of our monetary history and general acceptance of government fiat money and the Federal Reserve’s unlimited powers, the case for alternatives has never been stronger. The Fed’s failure to prevent financial crises, coupled with the rise of technology and alternative monetary options such as Bitcoin, make a compelling case for the dawn of new alternative monetary systems. In Monetary Alternatives: Rethinking Government Fiat Money, editor James A. Dorn of Cato’s Center for Monetary Alternatives has gathered leading scholars to examine some of those alternative systems and outline the way to reform.

“A limited constitutional government calls for a rules-based, free-market monetary system, not the topsy-turvy fiat dollar that now exists under central banking,” Dorn writes. The essays therefore examine the constitutional basis for alternatives to central banking, making the case for a self-regulating and independent monetary regime that operates with private contracts, rather than a centralized, politicized, and interventionist system.

The book is also particularly timely, as the Cato Institute prepares to celebrate its 40th anniversary and the Center for Monetary Alternatives is set to host its 35th annual monetary conference. The collection includes both newer papers and others that were originally published as early as 1986. As Cato’s George Selgin notes in the foreword, much has changed in the last few decades. When Cato was first founded, there was very little interest in monetary alternatives, and economists were confident that the Federal Reserve was a stable and well-oiled system. “Throughout the 1980s and 90s,” Selgin reminisces, “while journalists and most academic economists celebrated the Fed’s mastery of scientific monetary management, and other think tanks avoided the topic of monetary reform, Cato kept the subject alive, offering a safe haven, in the shape of its Annual Monetary Conference, for the minority of experts that continued to stress the need for fundamental monetary reform.”

draws on Cato’s years of scholarship to propose concrete ways to improve our current system and implement alternatives. As the Cato Institute looks forward to its next 40 years, Dorn writes with the hope that the insights in this volume will “help shape a new monetary order based on freedom and the rule of law.”