Is the world getting more or less free? Which countries have the most robust freedom overall? How do economic freedom and personal freedoms interact? The Human Freedom Index, now in its third annual edition, is the most comprehensive freedom index ever created to answer these questions for 159 of the world’s countries. The report is copublished by the Cato Institute, the Fraser Institute, and the Liberales Institut at the Friedrich Naumann Foundation for Freedom. It measures 79 distinct indicators of personal and economic freedom, including freedom of movement and religion, the rule of law, freedom of expression and information, freedom of identity and relationships, the size of government, freedom to trade, the legal system and property rights, and more. 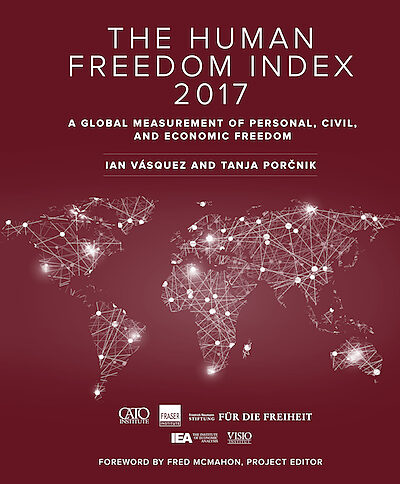 The authors, Cato’s Ian Vásquez and Tanja Porčnik of the Visio Institute, find that global freedom has declined slightly since last year’s report. The top five jurisdictions for freedom were Switzerland, Hong Kong, New Zealand, Ireland, and Australia. The United States ranked only 17th. The five least free countries were Egypt, Yemen, Libya, Venezuela, and finally Syria, in 159th place. The areas that saw the largest global declines in freedom were the rule of law; freedom of movement; association, assembly, and civil society; and expression and information.

Out of 17 regions, the highest levels of freedom were found in Western Europe, Northern Europe, and North America (Canada and the United States). The lowest levels were in the Middle East and North Africa, Eastern Europe (Moldova, Russia, and Ukraine), South Asia, and sub‐​Saharan Africa. Many of the countries that slid in freedom are those experiencing a wave of authoritarian populism, such as Russia, Venezuela, Turkey, Hungary, and Argentina.

While global freedom did decline overall, about half the countries in the index had improved since last year’s report. Some countries have shifted dramatically in rank over the past 10 years—while Russia, for example, moved from 99th place in 2008 to 126th in 2015, Taiwan moved in the opposite direction—from 49th place to 19th.

The index continues to find that freedom leads to increased prosperity—countries in the top quartile enjoyed a much higher average per capita income, at $38,871, than those in the bottom quartile, at $10,346.