Rep. RO KHANNA (D-CA) has become one of the leading anti‐​war voices on Capitol Hill, spearheading the push to invoke the 1973 War Powers Resolution to end American support for Saudi Arabia’s war in Yemen. Rep. Khanna addressed a Cato policy forum in December to provide an update on these efforts and to commend Cato’s support for a more restrained foreign policy.

RO KHANNA: I’m honored to be here, and very grateful for the Cato Institute’s voice. I don’t think I ever thought I’d be speaking at the F. A. Hayek Auditorium, but my professors from the University of Chicago will be proud. The reality is that the Cato Institute has been one of the strongest voices for restraint and nonintervention over the past few decades. And on that front, there is, in my view, large and growing agreement in the United States Congress. 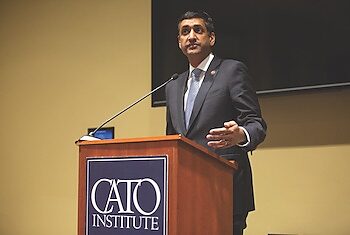 The United Nations reports that we could have a famine that affects 12 to 14 million people in Yemen. Now, to put that in context, the largest famine in recent history was in West Bengal in 1943, and that took about 3 million lives. In the Rwanda genocide, 800,000 died, and in Bosnia, about 100,000. In Yemen, we have a possibility of suffering on an unimaginable scale. And we know what the cause of the potential famine is. There are people already dying every day of malnourishment, cholera, or starvation. But we know that the food and medicine isn’t getting to Yemeni civilians.

This is not rocket science; this isn’t some complicated foreign policy issue. Set aside what you think Yemen’s government should look like, whether it should have the old government back, or how much role there should be for the Houthis or the Saudis or the influence of Iran. On the humanitarian crisis, it’s a very simple point. The Saudis right now are bombing Hodeidah. As a result, not enough food and medicine is getting in.

Amartya Sen has said that famine is always a political problem. It’s never that we don’t have the food or medicine. If you talk to people, especially to people in my district, they’ll ask you why we can’t just get food and medicine in. The problem isn’t that the world is unable to come up with the food and medicine to supply those in need. The problem is that the bombing campaign and restrictions in the ports aren’t allowing that aid to the Yemeni people. So, what we have said is, bracket the political question. Instead, let’s have an immediate cease‐​fire so that we can save human lives. That should be something that everyone in our country wants.

But back then, there was no appetite from either party’s leadership, frankly, to stop the support of the Saudis. Sens. Bernie Sanders and Mike Lee showed great courage in the Senate — they made progress, they introduced the resolution, they got to about 44 votes, and then there was a loss of momentum. And then two events changed that. First, we had horrific images coming from Yemen of kids dying, kids being bombed, and buses being bombed. Second was the death of Jamal Khashoggi. I think the death of Khashoggi was a turning point, and the irony is he was killed because he was critical of the war in Yemen. But it took his death for the world to listen to what he had to say. It says something about our capacity for moral imagination that when someone people knew, who wrote for the Washington Post, suffered that kind of gruesome death, that finally we woke up at the images of children dying. As if civilians dying in Yemen wasn’t enough.

So we reintroduced our resolution, and we were denied a vote in the House of Representatives. The 1973 War Powers Resolution says that any member of Congress can introduce a resolution, if there are any ongoing hostilities that are unauthorized, and that there must be a vote within 15 days. We did not get a vote. Now, there have been attempts by members of Congress to sue over violations of the War Powers Resolution; and in those cases, the courts denied standing, and the U.S. Supreme Court declined to hear the appeals.

The problem is not with the courts; the problem is with Congress. We need to be willing to vote, to exercise our Article I responsibility by saying that war is not allowed without congressional authorization, and we haven’t been willing to do that in the House of Representatives. And then you have, again, Senator Lee and Senator Sanders make a very courageous effort in the Senate. This time, they made progress, they got 63 votes. [After this event, the House in February and the Senate in March voted to end U.S. assistance to the Saudi war.]

Let me end with a few comments on why this matters beyond the humanitarian crisis. On one level, all of us should care just because of the pictures of the young girl up there. It’s going to be a stain on the conscience of every person in power or responsibility that we have been silent and complicit in the catastrophe that’s happening in Yemen. It’s something that all of us will live with. And so, we need to fight just on a basic humanity. But when you look more broadly at our foreign policy — I was struck by a recent article in the New York Times on the rise of China. And of course, you can look at China’s flaws — the incarceration of millions of Muslims and the state control of private enterprise but there was one thing that struck me in the article. China has not gone to war in nearly 40 years, since 1979, with Vietnam. Think about that. For an administration that says its big competition is China, one of the powers — us — has been bogged down in almost every conflict, from Iraq to Libya to Syria, and now Yemen. I mean, ask people back in my district, and sometimes there’s such a disconnect between there and Washington. When we go back to our communities, and ask folks, “Do you think the United States should be involved in a proxy war between the Saudis and Iran and the Houthis and Yemen?” most Americans would say “Where is Yemen?” They don’t understand why in the world we would be engaged in that kind of interventionism.

We have to return to a foreign policy of restraint, one that develops our capabilities and our potential in communities across America, and not become bogged down in unwinnable conflicts that lead to greater resentment of the United States, and that don’t advance American interests. The good news is that this is a view that more progressives are sharing and more folks, frankly, in the Freedom Caucus are sharing. I never thought that Mark Meadows would be a bigger ally of mine in Congress on certain issues than my own party. But there is an emerging consensus that we need greater restraint, a greater role for human rights, and I think Yemen is such an obvious case for that to begin. So, I appreciate Cato and its leadership, and I am committed to continuing to fight in the House to stop our support of the Saudis in this war. Thank you.