Nury Turkel is the chairman of the Uyghur Human Rights Project, working to raise awareness of the plight of the Turkic Muslim minority in China’s East Turkistan region and their increasing repression by Communist Party authorities. He spoke at a Cato policy forum in November to relate his own personal experience as well as recent events. With hundreds of thousands confined to “reeducation camps,” as China euphemistically calls them, aimed at extinguishing the region’s religious and cultural differences from the rest of China, the Uyghurs represent one of the most pressing ongoing humanitarian crises.

NURY TURKEL: My own life tells the story of Chinese state policy toward the Uyghurs. I was born in a re‐​education camp, during the Cultural Revolution. My father was in a labor camp (laogai) when my pregnant mother was taken into a re‐​education camp (laojiao). My mother suffered tremendous hardships, and when I was born, I was not expected to live. 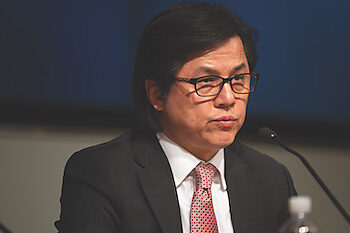 After the death of Mao and the end of the Cultural Revolution, Uyghurs experienced what is now considered the golden age of Uyghur life under the People’s Republic. The 1980s, when I was a high school and university student, were a time of relative freedom and economic progress. Many people were released from prison and labor camps, the universities were reopened, and Uyghur cultural institutions such as the Meshrep were gradually re‐​established. I remember going to religious services with my father on important Islamic holidays. Even as a child I felt strongly the sense of relief and joy in being able to participate in normal community life.

That golden period lasted until the Tiananmen massacre in 1989, which led to a wave of political retrenchment. The collapse of the Soviet Union in 1991 brought a completely new political atmosphere for Uyghurs, which lasted through the 1990s. The government launched repeated waves of repression, called “strike hard” campaigns. The stated goal was to suppress what the Party called the “three evil forces”: separatism, terrorism, and religious extremism. Countless scholars, religious leaders, community leaders, poets, musicians, students, and ordinary people lost their jobs or were hauled away to reeducation camps or prison. Their only “crime” was to express pride in a distinct Uyghur identity, practice their religion, or protest unjust policies and corrupt abuses by officials.

The 9/11 attacks ushered in the next era, an era of even more restrictions. Government propaganda turned on a dime. Suddenly, the government declared that China, too, was a victim of international Islamic terrorism. Conflicts between villagers and local officials were no longer evidence of so‐​called “separatism,” according to the government. Instead, they were evidence of international terrorism. According to the Communist Party newspaper Xinjiang Daily, 18,000 Uyghurs were detained on national security charges in 2005 alone.

Forced assimilation policies were already in place. Popular singers and poets were imprisoned for expressing Uyghur traditions, learning, and culture. Uyghur was banned in schools, and tens of thousands of middle‐​schoolers were sent to mandatory boarding schools, including the so‐​called Xinjiang classes in inner China. This period lasted from 2001 through the violent protests in Urumchi in July 2009.

After 2009, the full‐​scale militarization of control began. The internet was completely blocked through the region for six months. As in Tibet, vast numbers of armed security forces were stationed in cities and villages. By 2013, many parts of East Turkistan resembled a country under military occupation. There were armed checkpoints along the highways and at entrances to towns and villages.

Xi Jinping’s visit to Urumchi in May 2014 was the decisive turning point. During his visit, he was reported to have said, “What, they haven’t become Sinified yet?” Then there was a bombing at the Urumchi train station at the end of his tour, which killed 3 people and injured 79, according to government media — the actual circumstances of that attack remain unknown.

At that point, Xi Jinping declared that the government would adopt a “strike first” approach to security in the region. This involved technology like surveillance cameras and mandatory monitoring apps on every phone, and also a system of informers in every work unit and village. Think of the East German Stasi on steroids, and you will have some picture of the life of Uyghurs under this high‐​tech police state.

This brings us to today. Here is the story of one woman who was taken into the mass‐​detention camps. She was traveling in China on an overseas passport, and was detained upon her arrival in East Turkistan. She was interned in a camp along with her one‐​year‐​old baby.

In the camp, she was physically humiliated and repeatedly forced to denounce any belief in Islam, which was classed as a sign of her sympathy for terrorism.

She was coerced to repeat sentences such as: “I deserve punishment for not understanding that only President Xi Jinping and the Communist Party can help me,” and “There is no God. I don’t believe in God. I believe in the Communist Party.” Anyone who didn’t say these slogans correctly in Chinese was beaten or put in the “tiger chair.”

It is obvious that the Chinese government is lying when it says that these facilities are “vocational training centers.” In fact, the camps are designed to break the Uyghurs’ ethnic and religious identity once and for all, after years of repressive policies. Georgetown University professor James Millward has said: “Cultural cleansing is Beijing’s attempt to find a final solution to the Xinjiang problem.”

It has been 18 months since we started to learn about the mass‐​internment camps. Determined journalists, human rights activists, and academics have done heroic work to uncover these secret camps. They have used internet searches of government construction bids, analysis of satellite images, and interviews with Uyghurs and other Turkic Muslims, to expose a vast network of camps across East Turkistan that hold at least one million people.

At 3 p.m. today, for the first time, Congress will hear testimony from a camp survivor. Mihrigul Tursun is a 29‐​year‐​old Uyghur woman who endured 10 months in the camps. When she spoke at the National Press Club, the audience was literally in tears hearing her story. She had gone abroad to study English, in Egypt, and gave birth to triplets in March 2015. She came home to East Turkistan when her babies were two months old, so her parents could help take care of them. When she got to passport control at the Urumchi, she was taken for questioning and her babies were taken away. She didn’t see them again for three months. All of the babies had terrible health problems, and her oldest boy died one day after her release. Over the next three years, she was detained three separate times, and endured beatings and many other unspeakable forms of torture. She begged the guards to kill her. By a miracle, she and her two other children have now made it to the United States, but she still fears for her safety.

Uyghurs overseas suffer crippling anxiety and guilt. We are terrified that we will never see our loved ones again. We have nightmares about what our family members, our classmates, and, friends are going through on a daily basis.

The Chinese government has exported its campaign of total destruction of the Uyghur people by pursuing them abroad. In July 2017, the government suddenly put tremendous pressure on various countries to round up and deport all Uyghurs living there. We have the names of at least 48 Uyghur students that the government of Egypt deported to China, and who have now disappeared.

Even in democratic countries, the Chinese government harasses, threatens, and coerces Uyghurs. They receive demands to return home if they don’t want their family members to be taken to the camps. They receive demands to spy on the democracy movement in exile. Hundreds of Uyghurs have testified to receiving phone calls and text messages saying, “Think about your responsibility. Think about your family at home.”

It’s past time for action.

Democratic governments have to ask if “business as usual” with China is legitimate, given what we now know. Universities have to ask themselves whether exchange programs with China are legitimate at this moment in history. The private sector must be asked whether it is legitimate to pursue profits in a country that is taking away innocent members of ethnic and religious minorities into concentration camps.

The Global Magnitsky Act was enacted in 2016. Given the vast scale, and unspeakable brutality, of China’s persecution of the Uyghurs, we have to ask: if Magnitsky sanctions are not used to sanction Chinese officials, will this be a green light to the Chinese Communist Party that concentration camps are okay in the 21st century?

Finally, it is completely unacceptable that Chinese security forces are allowed to harass and threaten Uyghur‐​Americans, and carry out reprisals against them by taking their relatives to the camps. U.S. law enforcement must investigate and prosecute these abuses against American citizens. If prosecution is impossible, sanctions are the appropriate response. Our government must protect us.

The United States has now gotten tough on China for its unfair trading practices. The Justice Department has gone after economic espionage and theft of U.S. technology. It is past time to act on the Uyghur crisis. Other countries are waiting for the United States to act. When it acts, others will follow. Thank you.