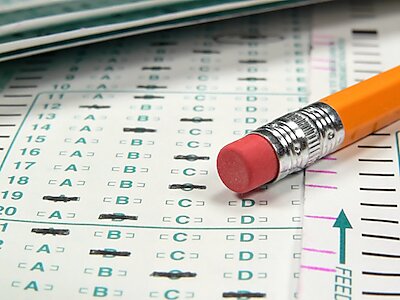 In “The Public Benefit of Private Schooling: Test Scores Rise When There Is More of It” (Policy Analysis no. 830), Cato’s Corey DeAngelis studies the effect that increased access to private schooling has on international student test scores in 52 countries around the world. Controlling for various other factors, he finds that a 1 percentage point increase in the private share of total primary schooling enrollment would lead to moderate increases in student math, reading, and science achievement within nations. And these moderate increases could potentially have great impact—DeAngelis notes, for example, that the United States ranked 40th in math and 24th in reading on the 2015 PISA exam. “If the United States had experienced a 10 percentage point increase in private school enrollment at that time (an increase that would be out of the ordinary for the United States), I estimate that the nation would have achieved a 14-point increase in math and a 10-point increase in reading, resulting in the country being ranked around 34th in math and around 13th in reading,” he writes.

WHY FUNERALS ARE SO EXPENSIVE
In America, the number of people subjected to occupational licensing regulations has risen dramatically in recent years—from 5 percent of the workforce in 1950 to over 25 percent today. In “The Undertaker’s License” (Research Briefs in Economic Policy no. 91), Brandon Pizzola and Alex Tabarrok of George Mason University examine the effects of occupational licensing by reviewing the funeral services industry in Colorado, the only state that does not license funeral directors, having repealed licensing in 1983. They find that before 1983, funeral services industry prices were roughly the same in Colorado and the rest of the United States. But after 1983, funeral services prices in Colorado fell and grew more slowly than in the rest of the country.

A NATIONAL ID IS COMING
Despite the fact that most Americans oppose the creation of a national ID system, numerous states are quietly developing them. In “The New National ID Systems” (Policy Analysis no. 831), Jim Harper, the executive vice president of the Competitive Enterprise Institute and a former Cato senior fellow, summarizes the stances of each of the 50 states on various ID systems, including REAL ID, E-Verify, facial recognition, and license-plate scanning. “Officials and citizens in every American state should review their states’ identification, data collection, and data retention policies,” he warns. “The privacy and liberty of all Americans are threatened by such increasingly widespread surveillance systems.”

COUNTERPRODUCTIVE SUBSIDIES
Free-market economists have long argued that private markets have mechanisms to internalize externalities without government intervention. In “Shops and the City: Evidence on Local Externalities and Local Government Policy from Big-Box Bankruptcies” (Research Briefs in Economic Policy no. 92), Daniel Shoag of the Harvard Kennedy School and Stan Veuger of the American Enterprise Institute set out to provide empirical evidence of these mechanisms and show how government intervention hampers them. The authors examine how local governments try to incentivize big-box retail stores to stay in business. Often the governments use sizable subsidies and tax expenditures intended to spur economic development, as in St. Louis, Missouri, where local governments provided more than $5.8 billion in local subsidies over the past 20 years, about 80 percent of which went to retail stores. But they find that these subsidies in fact disincentivized private solutions that cropped up in other areas, such as in shopping malls that provide heavily reduced rental rates to big-box stores.

THE POWER OF THE INTERNET
In “The Arrival of Fast Internet and Employment in Africa” (Research Briefs in Economic Policy no. 93), Jonas Hjort of Columbia University and Jonas Poulsen of Harvard University examine how access to high-speed internet affects economic success in poor countries. They find that internet access can revolutionize employment rates and job inequality—the probability that an individual is employed increases by 4 percent or more when fast internet becomes available, and the probability of being employed in a position belonging to a skilled occupation increases as well. Internet access appears to shift individuals out of low-productivity occupations, such as small-scale farming, and toward higher-productivity jobs. They also find that inequality in employment outcomes falls when fast internet arrives in Africa.

REFUGEES AND EDUCATIONAL OUTCOMES
As of 2015, there were 65.3 million refugees and internally displaced people around the globe, the most in history. In “Unwelcome Guests? The Effects of Refugees on the Educational Outcomes of Incumbent Students” (Research Briefs in Economic Policy no. 95), David N. Figlio of Northwestern University and Umut Özek of the American Institute for Research conduct the first analysis of the effects that a large influx of refugees has on the educational outcomes of incumbent students. They study one of the largest recent influxes of refugees into the United States, following the devastating earthquake in Haiti in 2010, when over 4,000 refugee students entered Florida public schools in just one year. Ultimately, they find little evidence that the refugee population had any negative impact on outcomes for native students.

HOW TARP ENRICHED INSIDERS
When government bails out business, how do the insiders—the politically connected managers of firms—benefit? In “Political Connections and the Informativeness of Insider Trades” (Research Briefs in Economic Policy no. 94), Alan D. Jagolinzer of the University of Cambridge, David F. Larcker of Stanford University, Gaizka Ormazabal of the University of Navarra, and Daniel J. Taylor of the University of Pennsylvania examine the relationship between political connections and informed trading by corporate insiders at leading financial institutions during the financial crisis. They find evidence of abnormal trading by politically connected insiders a full 30 days before TARP infusions, and that these trades predicted the market reaction to the infusion.

WHEN A ROBOT TAKES YOUR JOB
In “People versus Machines: The Impact of Minimum Wages on Automatable Jobs” (Research Briefs in Economic Policy no. 96), Grace Lordan of the London School of Economics and David Neumark of the University of California at Irvine examine whether minimum wage laws incentivize companies to replace workers with automation. Their study provides the first evidence on how the shares of automatable jobs change following a minimum wage increase, and on the effects of minimum wages on groups that are very often ignored in the minimum wage literature, such as older, lessskilled workers. They find that increasing the minimum wage significantly decreases the share of automatable employment held by low-skilled workers. Overall, they estimate that an increase of the minimum wage by $1 decreases the share of low-skilled automatable jobs by 0.43 percentage point.

THE DANGER OF CAMPAIGN FINANCE LAWS
In the wake of Citizens United, advocates of campaign finance restrictions have called for more extensive donor disclosure laws, often citing Supreme Court Justice Louis Brandeis’s famous maxim that “sunlight is said to be the best of disinfectants.” In “Staring at the Sun: An Inquiry into Compulsory Campaign Finance Donor Disclosure Laws” (Policy Analysis no. 829), campaign finance attorney Eric Wang, a senior fellow at the Institute for Free Speech, considers whether all this proposed “sunlight” might have unintended harmful effects. Wang argues that, in an age in which free speech is increasingly under siege from both sides of the political spectrum, it is more important than ever to preserve the right of individuals to engage in politics without the fear of reprisal that comes from having their names, addresses, and employer information posted on the internet because of compulsory donor disclosure laws.

HOW CRIMINAL MINDS ARE MADE
What make someone a criminal? In “Making a Narco: Childhood Exposure to Illegal Labor Markets and Criminal Life Paths” (Research Briefs in Economic Policy no. 97), Maria Micaela Sviatschi of Princeton University studies how childhood environment and parental responses can affect criminality later in life. She finds that criminal careers can develop during childhood. In Colombia, for example, individuals who grew up in coca-producing areas and experienced high coca prices during childhood are about 30 percent more likely to be incarcerated and have 20 percent lower earnings than their counterparts. She then tests how changing incentives and responses for parents can mitigate these risks—areas where parents were given money with the condition that children attend school on a daily basis, for example, experienced a significant reduction in coca production and child labor, which resulted in better outcomes for the children.

SPENDING MONEY DOWN THE DRAIN
How does massive government spending actually affect the economy? Past studies attempting to quantify the effects of spending have faced challenges. In “Local and Aggregate Fiscal Policy Multipliers” (Research Briefs in Economic Policy no. 98), Bill Dupor and Rodrigo Guerrero of the Federal Reserve Bank of St. Louis use new data to study the effects of U.S. defense on the economy, finding that spending has resulted in a less than one-for-one increase in national income.