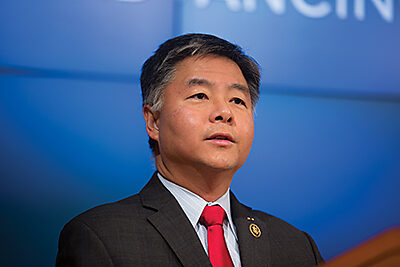 Most people believe that they have some fundamental right to privacy—but how can anyone achieve privacy in an age when people are constantly surveilled by ever‐​more‐​sophisticated technology, on phones, GPS devices, surveillance cameras, and more? At the 2017 Cato Surveillance Conference, experts, policymakers, technologists, and civil society advocates gathered to discuss the state of surveillance and what can be done to stop the erosion of Americans’ privacy. Rep. Ted Lieu (D-CA) delivered the opening remarks, recalling that his Taiwanese parents came to America precisely because America was a country where citizens had no need to fear their own government. Lieu warned that mass surveillance programs, such as those authorized by the Foreign Intelligence Surveillance Act’s controversial Section 702, which allows the government to intercept Americans’ communications, are endangering the American dream his parents came here in search of. A series of flash talks throughout the afternoon went in‐​depth into surveillance techniques and how the government shields them from the public eye—through the practice of parallel construction, for example, which Sarah St.Vincent of Human Rights Watch dubbed “one of the most frightening civil liberties issues that you may never have heard of.” (See page 9). Justin Hansford of Howard University delivered the lunch keynote address, in which he reviewed the FBI’s long history of surveilling civil rights activists under the guise of targeting “extremists.” A final panel discussed what self‐​defense strategies citizens can employ to shield themselves from surveillance. For example, Steve Bell previewed his venture Orchid Labs, which aims to build a totally decentralized, anonymous, and surveillance‐​free layer of the internet by allowing users to sell their bandwidth—this way, users in countries where internet use is heavily regulated and surveilled, such as China, can purchase bandwidth from freer countries in the West, increasing global freedom and thwarting government surveillance.